A commonly quoted piece of advice that is the theme of this market analysis is one by Baron Rothschild, an 18th-century British man who was also part of the famous Rothschild banking family. The quote goes “Buy when there’s blood in the streets”, but I’ve also heard “even if it is yours” appended to the end. I cannot confirm origin nor legitimacy of the appended ending, but it further proves the point and theme of this week’s Market Analysis.

With the New Year just starting, Bitcoin is starting the year with the same downward trend as of last year, which is discussed in the previous release of Market Summary, and it seems most other coins are following suit as well.

Every coin in the top 20 of market capitalizations is down when looking at the 7-day overview. With Paycoin being the most severe losing 66% of its value in this week, Bitcoin is down 15% with 11% of that coming from just yesterday(at time of writing). Litecoin is under $2, and even Ripple has finally come down and is under 2 cents again per Ripple. 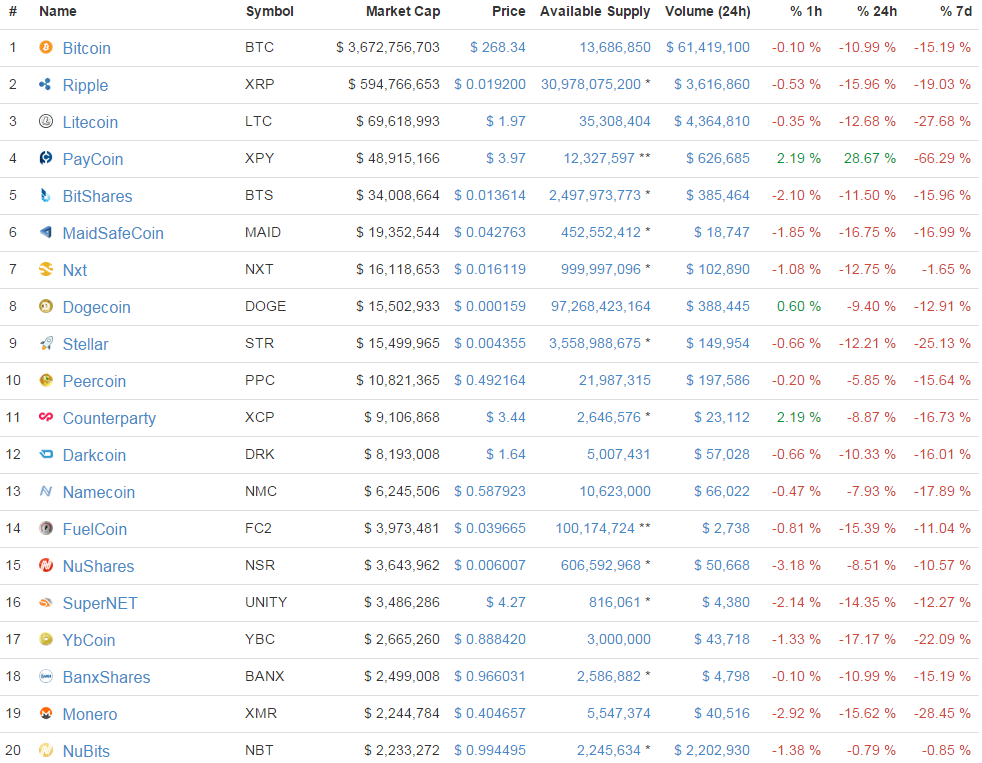 Cryptocurrency right now is just a buyers’ market, but if I were a buyer I’d wait just a bit longer. It doesn’t look like the trend will change nor stop anytime soon, so with a little patience buyers looking to get into Bitcoin may seem themselves with rare buying opportunities that only come up once in a blue moon.

Even Litecoin, Dogecoin, Ripple, and Darkcoin, as well as the collective market capitalization of cryptocurrency, is down with the current total being 4.6 billion. Down from the mid 5 billion range of just a couple days ago, it was safe to assume the whole network as a whole is suffering.

If we take a look at Bitcoin, we are having more people selling than buying, which explains 2014 Bitcoin price trend, which may, unfortunately, carry over to 2015.

An interesting reddit post submitted to the Bitcoin sub reddit may explain why a portion of selloffs is occurring, but I do not believe the only reason Bitcoin is falling in price. The post can be viewed here, and is titled “A minimum of 1470 Bitcoins has to be dumped on the market just to cover electricity cost”.

These statistics come with the conclusion that 1470 Bitcoins, 37% mine on a daily basis, must be dumped to cover just electrical costs. This is assuming everyone is using Antminer S4s, and the price of electricity is $0.08, the average cost of electricity in China and India.

Note these stats are best case scenario, and assuming miners are only covering costs, and do not want to make a profit so the amount dumped daily is most likely more than 1470. As the mining race becomes more and more competitive, these statistics aren’t going to suddenly improve, unless Bitcoin receives some much needed appreactiation in price.

However, in the meantime, it seems miners will continue to dump, and with all the pressure, something had to give. What do you guys think, will Bitcoin be the year of Bitcoin? Will it finally hit the mainstream this year?