Mark Cuban’s NFT marketplace Mintable has raised $13 million in a Series A funding round. Despite the 90% market crash, it seems the NFT market is still going strong.

Mintable is an Ethereum-based NFT marketplace, backed by the billionaire investor Mark Cuban. The platform has raised $13 million in a Series A funding round.

Investors include the likes of Ripple, Animoca Brands, Metapurse (the Metakovan-backed crypto fund), and Doug Band.

Mintable plans to scale its operations with the help of the funding. The NFT marketplace is also looking to boost its user acquisition and growth initiatives.

As the technology continues to mature and the space rapidly evolves, this is a critical company milestone for Mintable and we are thankful for the support from our investors who hold the same shared belief of the many opportunities that NFTs can bring among mainstream users.

Why The NFT Market Is Just Getting Started

During the month of May, the market was at its peak with movement of around $176 million worth of NFTs.

Beeple sold his “Everydays: The First 5000 Days” for about $69 million around this period, making it the most expensive NFT ever.

However, in under a month the market crashed 90%. The current 7-day average movement of the market is just $18 million.

Here is a chart that shows how the NFT market has changed over the past few months:

However, despite such a drastic crash, the market’s future is still looking strong as shown by the interest in Mintable’s funding round.

Some other big names have also invested into the technology. Marvel announced branded-NFTs only a week ago, while Fox revealed they are investing $100 million into their NFT business.

NFT-powered games and metaverse platforms have also been getting more popular lately.

As the market becomes more accessible, and non-fungible tokens go more mainstream, the market might eventually reach the same heights it did back in May.

Incidentally, the NFT crash happened in tandem with the Bitcoin one where BTC’s value dropped by 50%.

Right now, BTC is trading at about $33k, down 3% in the past 7 days. Here is a chart showing the trend in its price: 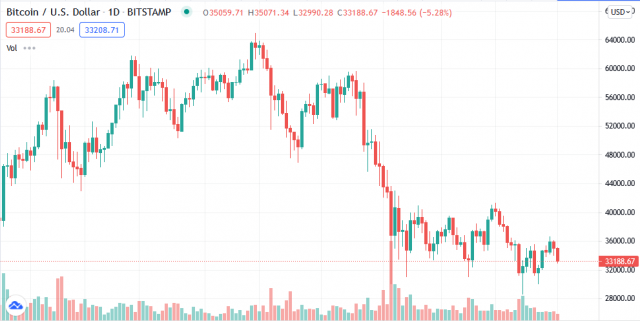 BTC seems to be down at the moment | Source: BTCUSD on TradingView

Bitcoin doesn’t seem to be moving up, but it’s not clear whether it’s in a bear market or not.

A fundamental BTC sign has turned green, which has historically proven to be the best time to buy the cryptocurrency. So it’s possible the market might soon take a bullish turn.