Modex is a marketplace for ‘plug-and-play’ smart contracts, removing the hassle of trying to build complex blockchain dApps.

With more organizations increasingly adopting blockchain technology, the need for robust capacity building in the industry has become front and center of the emerging industry’s general narrative. However, the creation of smart contracts and decentralized applications (dApps) requires specialist knowledge which is in short supply.

For this reason, the emerging technology remains underutilized. There isn’t sufficient technical expertise in many organizations today, to effectively adopt and implement blockchain solutions.

Thus, companies are forced to either train employees or hire blockchain experts. Both options require spending time and money without the guarantee of success. All the while, the competition is pulling ahead.

What if instead of having to train employees or hire blockchain gurus, they could hop on a platform and purchase custom-made smart contracts? What if companies could interact with experts to develop bespoke dApps for their organization? This is where Modex comes in.

Modex aims to simplify the process by which companies can implement blockchain-based protocols by creating a marketplace for smart contracts, cryptocurrency integration, and dApps. Potential consumers only have to enter the Modex platform and have access to an assortment of useful blockchain tools.

Modex takes the Blockchain as a Service (BaaS) package and delivers a leaner, faster, and more efficient means for organizations to fast-track their decentralized technology implementation. The platform is essentially a marketplace for discrete, tailored, ‘plug-and-play’ blockchain solutions.

Once deployed buyers can search through the store and select the smart contract that they require. Also, buyers can directly commission a developer to create specific smart contracts or dApps. These will also pass through the same testing phase before their implementation on the client’s platform. 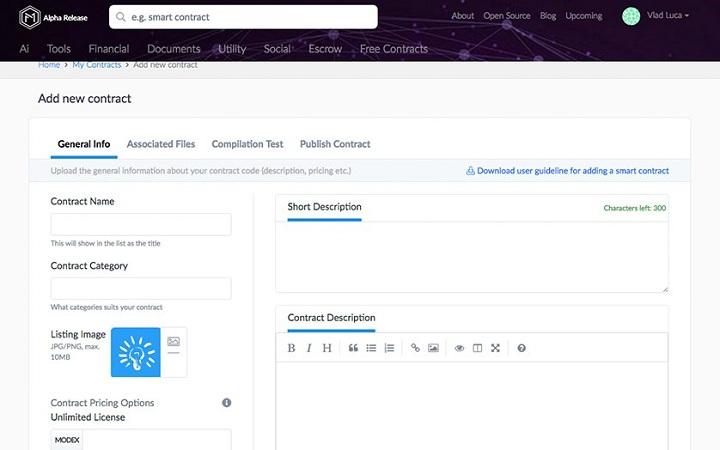 The MODEX token is the native currency of the Modex platform and drives all transactions in the marketplace. It is an ERC20 compliant token, divisible up to 18 decimals.

As part of the implementation of the project roadmap, Modex already secured $32 million in a Pre-ICO funding round that ended in April 2018. The main public sale will commence on September 15, 2018. The Initial Token Offering (ITO) is expected to run for nine days, and interested investors can purchase MODEX tokens with either Bitcoin or Ethereum.

The Modex marketplace is already live, and there are more than 70 smart contracts already on the platform. The platform’s UI is easy to navigate with smart search features and a collection of useful filters to quickly arrive at the desired smart contract. Buyers have the option of filtering according to the category, tags, and even price.

What do you think about the Modex smart contract marketplace platform? Please let us know the comment section below.