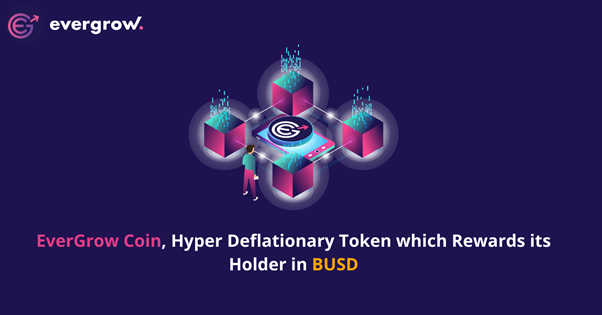 by Bitcoinist
in Press releases
31

EverGrow Coin which is considered by many analysts as the Next big Cryptocurrency was launched just 3 weeks ago with an entirely new idea of rewarding token holders in BUSD. EverGrow Coin is the next generation of the reflection token on the Binance Smart Chain that allows investors to make money in several ways. In addition to profiting from the coin increasing in value, holders can earn passive income by getting a cut of the transaction fee revenue generated by the project. What sets EverGrow apart from other crypto reward projects is that it pays out rewards in a stablecoin pegged to the U.S. dollar instead of the native token. It helps investors avoid sales taxes and fees when converting rewards earned in the native token to fiat money. This means EverGrow Coin owners have been seeing a passive income from day one, an income that doesn’t need to be sold, then exchanged from the native currency with relevant sales taxes. It’s an income that can be used immediately and remains stable in value.

This one feature alone caused an explosion of positivity around the crypto community, with EverGrow Coin seeing over 28,000 new holders, and exceeding the $150 million market cap within its first 3 weeks. EverGrow Coin has already distributed more than $5M BUSD in rewards to its holders.

On launch, half of the token total supply was burned, and a further 2% has been burned since. The Airdrop and Team Wallet, a further 5%, are locked and do not receive rewards. This means the rewards are distributed amongst just 44% of the total coins, meaning The coin is twice as rewarding as their nearest competition and everyone has a far greater share.

The EverGrow Coin team consists of finance professionals, software and marketing experts, and a team of developers with impressive CVs. The team is fully transparent, and ‘doxxed’, which means their identities are known, and this was independently verified by Assure, a data, education, and transparency company well respected in the Cryptoverse.

The EverGrow Ecosystem will develop several to increase the utility and volume of EGC Token, including Binance Smart Chain-based NFT Marketplace, Play-to-Earn Games, and Content Subscription Platform. This essential factor is something that has been overlooked by so many similar projects, who have relied on hype & endorsements to grow the price, rather than actual utilities that will encourage people to own and use the coin. EverGrow Coin will also be launching its Content Subscription Platform soon that will allow fans to enjoy exclusive content from their favorite stars and curators. The Content Subscription is built around EGC acting as the native currency and will allow fans to purchase subscriptions as well as tip curators in $EGC tokens directly.

EverGrow Coin is also developing the world’s first decentralized NFT lending platform. Built on BSC, The platform will allow NFT owners to readily borrow against their NFTs as collateral at fair interest rates without selling them. It implies that instead of collecting digital dust on their NFTs, people make money from them. Further, investors may purchase and sell NFTs, including those obtained via liquidated collateral from the NFT Lending platform at its BSC-based NFT marketplace. This creates a one-of-a-kind competitive market for buying NFTs at a discount to their average market value.