It seems from numerous reports the website bitcoinblackfriday.info could be a host of phishing scams. The website that premiered sometime two weeks ago looked seemingly like a competitor to the real BitcoinBlackFriday.com website. The possible fraudluent website ending in .info has a fake Trezor site, a fake Gyft site and others that everyone might want stay away from.

“Yep it links to buy-trezor.com, the real site is buytrezor.com” ~ /r/bitcoin commenter 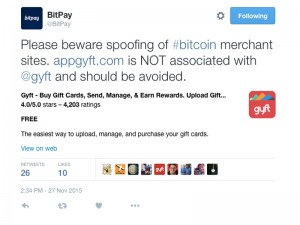 We all saw the announcements and the site behind it was similarly eerie to the originally created Bitcoin Black Friday website. There were subtle differences and users were to leave their email address to get revealed deals before the big event. Many people talked about the site in forums, and it was also mentioned in some news publications. No one had known that the site may have been set up to be a scam, and some say the phishing sites have been established mid-day November 27. The fake Gyft website and the others were created just a few days ago. It has not been officially confirmed that the site BBF.info was part of the conspiracy as there has been no word from the owner of the domain.

Another interesting aspect of the case was that the phishing sites were using previously used Bitcoin addresses at checkout. This had caused alarm for those early, and some immediately reached out to processors like BitPay. BitPay denied any involvement with the “appgyft.com” and supplied a warning to the community via their Twitter feed. 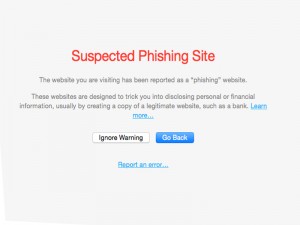 Reddit moderator Theymos came out on the subreddit /r/bitcoin and let forum users know the site was fraudulent. Theymos says, “bitcoinblackfriday.info is a scam. It’s the source of these phishing sites.” However, a reddit subscriber in the thread wasn’t too pleased with the moderators response.”Yeah, thanks a lot for not deleting their threads after multiple reports. real proactive!” the redditor says.

It is recommended you stay away from the website bitcoinblackfriday.info and its associated links until the owner comes forward. Theses pages could lead to malicious acts on your private accounts, computers and devices. Phishing is an attack on personal account information typically, but the websites can also pack viruses and keyloggers as well. The website ending in .info is not affiliated with John Holmquist and the original BitcoinBlackFriday.com, who has had a reputable service since he started the operation in 2012. It’s unfortunate that these people decided to create a scam like this for today’s buying festivities. Some may have most likely fallen victim to this accused website. The website is still running so; please pass the word along that the service is suspect. There has been no commentary from the accused host of the phishing inquirie links. This type of scam has also happens regularly to other non-bitcoin related Black Friday offers in fact the Black Friday shopping day and Christmas always has had high levels of phishing attempts.

There are no official links here on this article to the website itself as it is not recommended to visit the domain.

What do you think about this unfortunate event? Let us know in the comments below.