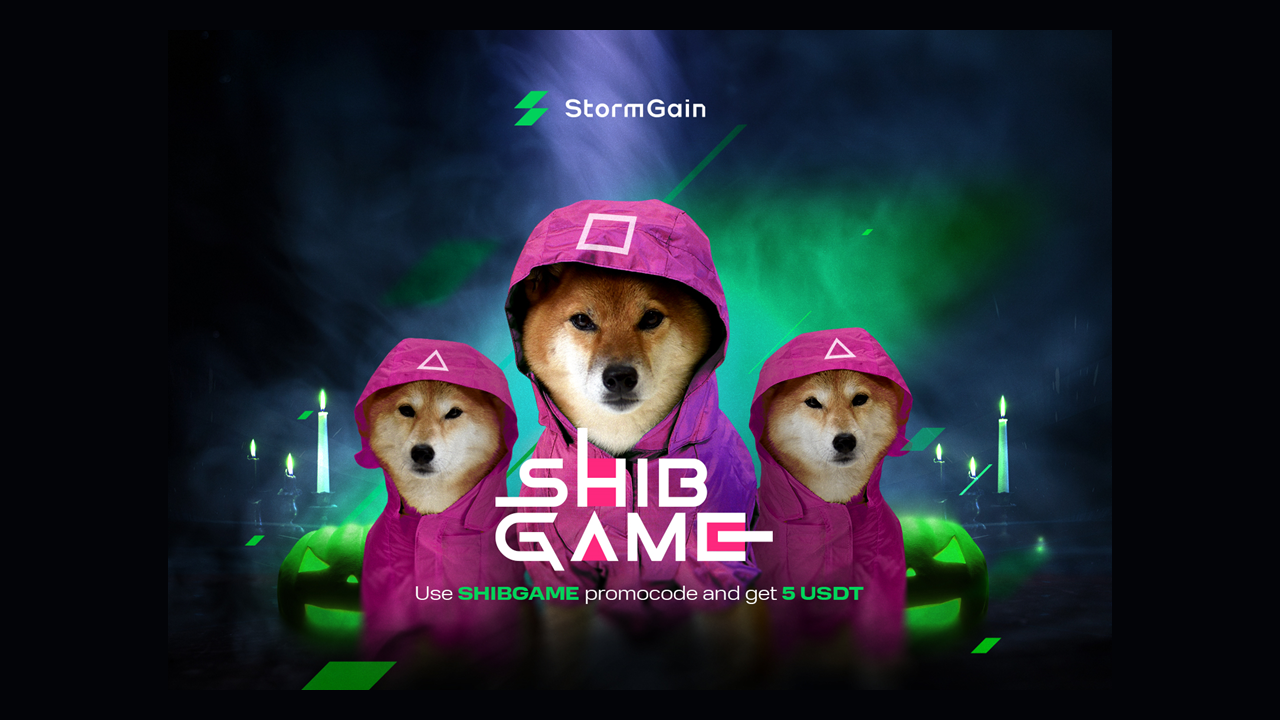 This Halloween Play the SHIB Game With StormGain and Get 5 USDT for Free!

If crypto is a Squid Game, then who are the game masters?

With Halloween right around the corner and the increasing popularity of Squid Game, the breakout Netflix series from South Korea that everyone is talking about, it is almost certain that we will see an influx of Squid Game-inspired Halloween costumes this year! The series sees indebted and impoverished contestants competing in a series of deadly children’s games, all to win a massive fortune that could change their lives. The show has become a global pop culture phenomenon, and the crypto community, ever ready to embrace memes and references, has also become obsessed with this unique Korean series.

Squid Game NFTs, tokens, promotions and competitions have all been recently announced within the crypto industry. Mostly unaffiliated with the Netflix series or the show’s producers, they use Squid Game symbols (such as the square, circle, triangle) or characters for popular appeal, or as a basis for game-like competitions. But some thinkers in the industry are going a little deeper than that, drawing parallels between the show’s concept and the crypto market as a whole: what if we’re…actually in a Squid Game?

There’s a lot about the crypto market that reminds traders of playing games. The risk and reward, the need to learn the rules and play the system, the potentially huge wins—add the factor of escaping the debt traps and unfairness of the financial system, and it’s no surprise that crypto traders find a lot to relate to in Squid Game, even putting aside the show’s most extreme elements. But there’s a particular market trend that is drawing some comparisons to one of the more disturbing parts of Squid Game—namely, who are the game masters?

Crypto investing used to be dominated by a handful of top coins— Bitcoin (BTC), Ethereum (ETH), XRP (XRP) and others at the top of the market cap league table were seen as relatively safe. The many altcoins were long shots that only the most reckless of speculators would gamble on.

Nowadays, however, it’s a very different story. Instead, we have over 1.5 million coins, many of them hastily slapped together, low-quality ‘spam’ or ‘meme’ coins fighting for investor attention. Much like in Squid Game, this is a winner takes all affair, with the few that succeed shooting up 1,000x in value, while the vast majority die an ignominious death.

It’s easier than ever to create tokens thanks to cheap chain templates, but the low effort involved has led to a market flooded with poorly thought-out ‘cryptocurrencies’ that have little to no use case and no purpose except as a gamble on a bubble. Obviously, the odds of survival for 99% of these tokens are slim to none. So, who can pick out the winners among this vast horde? For that, we have to look at gamemasters like Elon Musk.

The masters of the game

In the Squid Game Netflix series, the deadly games are organized by a cabal of international ultra-wealthy types for their own amusement. Although nominally neutral and committed to the fairness of the games, the game masters aren’t immune to influencing events or manipulating the rules.

In the crypto market, the powerful influencers like Elon Musk, Mark Cuban, Vitalik Buterin and others, can be seen as equivalents to the game masters, able to influence which coins in the multitude are able to survive long enough to win big. Even coins that, on the face of it, have little underlying value. We all know how Musk boosted Dogecoin earlier this year, and the Tesla billionaire’s influence doesn’t stop there—just look at the thousands of ‘Floki’ tokens that flooded the market when Musk tweeted a picture of his pet puppy Floki.

The success of Shiba Inu

So what happened to Shiba Inu (SHIB)? And yes, it’s named for the same type of dog from the meme that inspired Dogecoin. And the same breed as Musk’s puppy. Its recent 300% price surge rewarded investors, especially if they had bought the meme coin at the start of the year, with potential returns in the hundreds of thousands of dollars. But what made this coin succeed in the dog-eat-dog game of competing canine cryptos? It was promoted by another game master, Vitalik Buterin.

Staying ahead of the game

There’s a lesson for smaller retail traders in all this. Like it or not, to win the crypto game, you’re going to have to take into account the presence of the game masters and follow their moves. For example, StormGain provides an up-to-date news section to help you make sense of the reasoning behind the chart activity and trading signals that you see in the app.

The StormGain crypto app does its best to level the playing field. StormGain features such as zero-commission profit-sharing model and Bitcoin cloud miner find ways to share the wealth with everyone, even in the competitive crypto market. And every trader can profit from the actions of the game masters if they take them into account. Remember, if you’re looking to trade on volatility, even in the short term, then even the most minor meme coin can make a big profit if you notice an influencer pulling the strings.

Try out StormGain and get 5 USDT for free

Have you already prepared a Squid Game Halloween costume? Or perhaps you prefer to play it safe and join in on the other popular type of game… the SHIB Game! Unlike the Squid Game, this does not involve any violence at all and it’s so much more fun! Try it out today by taking advantage of our special promo code ‘SHIBGAME’, which awards all-new StormGain users with 5 USDT. Register with StormGain in just a few seconds and start trading SHIB today with the All-in-One crypto platform that also offers BTC cloud mining.