ASICRising, a German start-up is trying to find investors to produce a new high-performance microchip that it says would make bitcoin mining much cheaper and energy efficient.

The process of mining is becoming increasingly expensive. While mining requires enormous amounts of energy to feed the computing power and cooling systems needed to get the hashing done, ASICRising happily says it has found a solution to this problem: an energy-efficient, low-voltage chip that together with specific software will reduce by more than half the energy needed to mine bitcoin.

ASICrising was founded in July 2013 by a team of experienced electronic system engineers with a strong background in integrated circuit design, PCB design and software development. With offices in Dresden, Germany, the company is located in the center of the Silicon Saxony, Europe’s largest microelectronics cluster. The first generation of mining ASIC has been running since December 2013, the second generation mining ASIC is ready to Tape-Out. It is the world’s most power efficient mining ASIC. ASICrising will build up one of the world’s biggest mines, based on their own Hardware.

To realize the project, ASICrising GmbH becomes COINBAU AG that will be in charge of dealing with investors and the funding operation.

In an interview the company’s chief executive Sebastian Krause stated that the chip, called Wolfblood Extreme Efficiency, requires only 0.19 joules of energy for a gigahash compared with 0.37 joules per gigahash, the average so far consumed by the most energy-efficient bitcoin mining chips currently on the market.

ASICRising claims that the Wolfblood xE ASIC is an evolutionary enhancement of the previous successful and well known Wolfblood ASIC. Thanks to architectural improvements, a highly optimized implementation and a well-chosen technology, Wolfblood xE based Bitcoin miners will provide three times more hash rate while consuming the same power, compared to other mining equipments. The company strongly believes that their chips will be by far the most efficient and most economical solution for Bitcoin mining on the market.

Wolfblood xE inherits all the good features from its predecessor and enhances them: Fine-grained frequency stepping, adaptive voltage control, small footprint and standard IO interfaces all together enable both power-efficient mining at the lowest energy per GH ratio as well as power mining with the highest GH/s density at competitively low power consumption.

The company states that one of the major problems with low-voltage ASIC chips is unreliability; it’s a side effect of running a processor with very low voltages and making it run with extreme stability. Designing energy efficient chips with the lowest possible voltage it is a very difficult job given that lower voltage supply tends to make chips less reliable. ASICrising now announces that it has developed software that can work with the lowest possible voltage at full performance. The software boosts the chips’ reliability and further optimizes its energy efficiency. 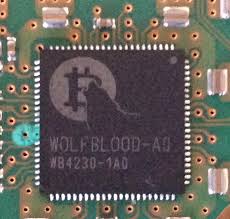 ASICrising has been collaborating with U.S. semiconductor maker Global Foundries Inc. This company will be in charge of producing the chip in a factory in Dresden, if ASICrising can raise the $15 million it needs to start production and cover other costs and expenses.

Unfortunately all Bitcoin miners face the same problem: eventually their chips used for mining will become useless. When more efficient chips hit the market, their power leads to increased Bitcoin mining, which increases the built-in complexity of bitcoin algorithms working as a structural design implemented into bitcoin by the designers to further regulate its production and entrance into the market. At some point, if the technology doesn’t keeps up, miners will pay more for energy costs than they get back in bitcoin.