Bitcoin and the aggregated cryptocurrency market are beginning to show some signs of weakness after a week-long bout of incredibly tight trading around $9,000.

BTC is now resting just a hair above its range lows at $9,000, and buyers are ardently attempting to thwart a decline beneath this level.

It is essential to keep in mind that this level has been broken on multiple occasions throughout the past few weeks, but the substantial support in the upper-$8,000 region has made these movements fleeting.

In the near-term, analysts are closely watching Bitcoin’s OBV indicator and its Bollinger Bands for insight into where it may move next.

Both of these indicators suggest further downside is imminent.

Over the past week, the benchmark cryptocurrency’s price has been incredibly stable at around $9,100, forming a range between $9,000 and $9,300.

The slow descent from $9,100 towards its range lows does appear to be a grim sign for the cryptocurrency’s outlook.

If its support breaks again and Bitcoin plunges into the $8,000 region, it will be imperative that buyers quickly step up and absorb the influx of selling pressure this could create.

One analyst recently noted that it is currently sitting on its lower Bollinger Band while looking towards its 4-hour chart.

If this lower band is pierced, the crypto could be in for some significant bear-favoring volatility.

“Bitcoin pressing lower BB on the 4 hour,” he noted while pointing to the chart seen below.

Other technical indicators seem to be spelling trouble for Bitcoin’s near-term outlook.

According to another popular analyst, BTC’s on-balance volume (OBV) indicator shows that the cryptocurrency is poised to see further downside.

He spoke about this in a recent tweet, saying he is now watching to see if it will start building a base around $9,000.

“OBV continues to show weakness. If price consolidates for too long at low $9,000’s and builds a base, I’ll take profit. Otherwise I’m looking for more downside.” 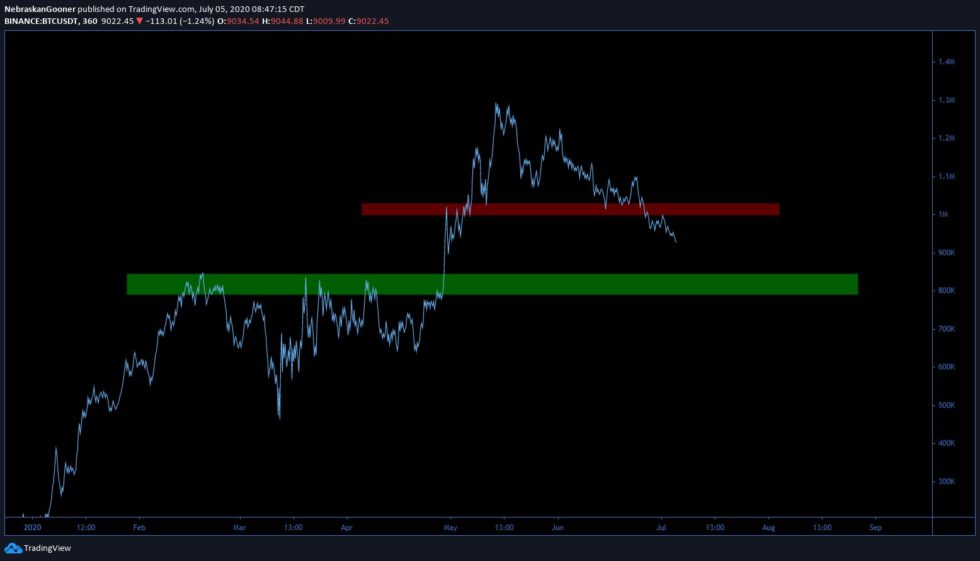 It is a strong possibility that Bitcoin won’t see any notable volatility until its weekly candle closes later today.