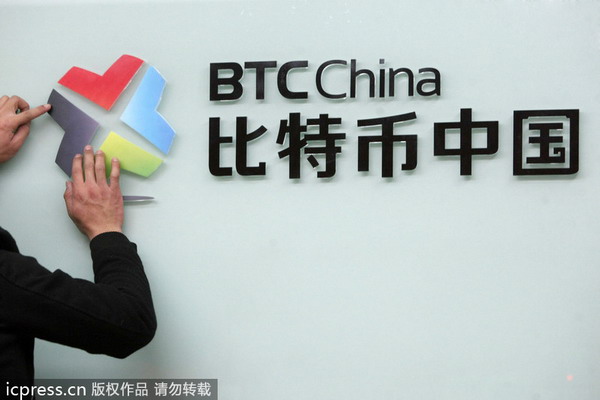 Bitcoins were worth nothing in 2009, when the digital cryptocurrency was first minted on the computer of its mysterious creator, Satoshi Nakamoto, who claimed to live in Japan.

Four years later the value of one Bitcoin surpassed $1,100, thanks in large part to a surge in speculative interest from China. A little-known Shanghai company called BTC China met the demand and quickly became the world’s largest Bitcoin exchange, with more than 100,000 of the virtual coins, or $100 million, traded on a single day, nearly double the market share of its closest competitor, Japan’s Mt. Gox.

BTC China attracted headlines and a $5 million investment in the fall from Silicon Valley’s Lightspeed Venture Partners as well as its China arm. But its rapid growth, and that of Bitcoin, also attracted the attention of the Chinese government.

Unwanted attention, as it turned out. In December the People’s Bank of China decreed that merchants may not accept Bitcoin and forbade banks and payment processors from converting Bitcoin into yuan. The price of Bitcoin fell below $500 in response.

Bitcoin is still widely embraced by technophiles and libertarians (and porn and pot-dealing websites) because the currency is all digital, easily transported across borders and resistant to state controls. A Bitcoin is “mined” on privately owned, specialized computing equipment and passed around by a global, peer-to-peer network of computers. Transactions are trackable, but the parties to each transaction are not. Bitcoin has attracted entrepreneurs and investors excited about its legitimate use: cutting out the middlemen in online payments. In December venture capital firm Andreessen Horowitz placed the biggest Bitcoin bet so far with a $25 million investment in San Francisco’s Coinbase, a platform for buying, selling and storing Bitcoins in the U.S. “As the world becomes more digital, paying physically with bills, gold or credit cards will seem archaic. Everyone will have Bitcoins,” says BTC China CEO Bobby Lee.

But China’s actions over the past weeks have put BTC China’s future in doubt. After Chinese regulators held a closed-door meeting to warn financial companies against working with exchanges, BTC China was swiftly abandoned by two payment processors. “There are 300 payment processors in China. We’re going to go down the list and find one that will work with us,” says an optimistic Lee. He doesn’t think the government is trying to put him out of business but rather put the screws on Bitcoin to cut down on the rampant speculation. “They haven’t declared exchanges illegal. That gives us room to maneuver, so there’s still hope.”

Lightspeed’s Jeremy Liew is keeping a distant focus. “Anyone investing in Bitcoin companies and Bitcoin specifically should be doing so with the expectation that there will be a lot of volatility driven by regulatory announcements. We invest over 5- to 10-year horizons, not over two-week horizons,” says Liew. “For Bitcoin to be credible, we need executives who have the gravitas to make its case to regulators. That’s Bobby.”

Lee, 38, was born in the Ivory Coast to parents who had moved there from China to set up a flip-flop factory. He was sent to an elite boarding school in the States, graduated from Stanford and spent eight years as an engineer at Yahoo YHOO -0.32% in California. He moved to China in 2006 to work as an engineer at EMC EMC -0.12%. In 2011 he became Wal-Mart’s chief technology officer in China, charged with helping to build its commerce site.

Lee first heard about Bitcoin in the spring of 2011 while visiting his family in California. Lee’s brother, Charles, was using some of his computer equipment to mine Bitcoin at home. Lee thought he would do the same back in China and bought a bunch of graphics cards from his brother. He started mining in July, the same month he started at Wal-Mart. Neither lasted long.

“It was a hot summer, and the computers created a lot of heat,” says Lee. “My wife said it was too noisy and hot, and so I turned it off in October.” He mined 25 coins, which struck him as a “waste” because they were worth just $300 total at the time and he had spent $1,000 on mining gear.

When Wal-Mart decided to partner with an existing e-commerce site in 2012 rather than build its own, Lee found himself jobless. His mind returned to those Bitcoins gathering digital dust on his computer. His brother had founded a competing cryptocurrency called Litecoin, but Lee wanted to focus on bringing Bitcoin to China. BTC China had popped up two years earlier as the country’s first site for Bitcoin trading. “It was just two guys working part-time on it,” says Lee. They were charging a 0.3% trading fee, but seeing just a few hundred trades per day. Lee sought out its cofounders to convince them it could be bigger. Lee became CEO in April.

They relaunched the site in June and went out looking for venture capital. When they landed the round from Lightspeed in September, they eliminated their fee. That kicked off a bidding frenzy fueled also by the free Bitcoin p.r. that came when the FBI took down Bitcoin-only drug site Silk Road and Baidu announced it would accept Bitcoin for security services, plus the positive buzz around U.S. Senate hearings on the digital currency.

But then the People’s Bank of China, responding to what it says was a wave of consumer concerns, declared in December that Bitcoin wasn’t a recognized currency and shouldn’t be used in the market, prompting Baidu and other Chinese firms to stop taking it as payment. As the extent of the real-world ban became clear, the price of a Bitcoin dropped to $345 on BTC China.

Lee initially saw the declaration as just a speed bump. Chinese citizens were still free to trade Bitcoin. BTC China stayed on the good side of the government’s concerns about money-laundering by asking customers for official identification. BTC also reinstated trading fees to cut down on the frenzy. But days later the government crushed hopes of a thriving trading business when it unofficially barred payment processors from working with Bitcoin exchanges. Suddenly BTC China and others would no longer be able to move their customers’ funds from yuan to Bitcoin and back–which is what exchanges exist to do. “We’re reading the tea leaves,” says Shanghai Bitcoin entrepreneur Jack Wang. “But it looks like they’re going to squeeze the exchanges until they’re not able to operate.”

China’s move is not without precedent. Eleven years ago Chinese Web service Tencent created a virtual currency called Q Coin for use in games. It became increasingly valuable offline and started trading on exchanges along with renminbi and gold. The government declared such use illegal in 2007, sending its real world value crashing to nothing.

China is still letting people play with Bitcoin in its country, but by cutting off ways to convert it to real money, it is turning it into the digital Monopoly money that skeptics have always dismissed it as being. “If necessary, we’ll go into other Bitcoin services,” says Lee. The company plans to launch a secure online Bitcoin wallet called Picasso at the end of December. “This is not the end. It may be the end of a chapter, but it’s not the end of our company.”