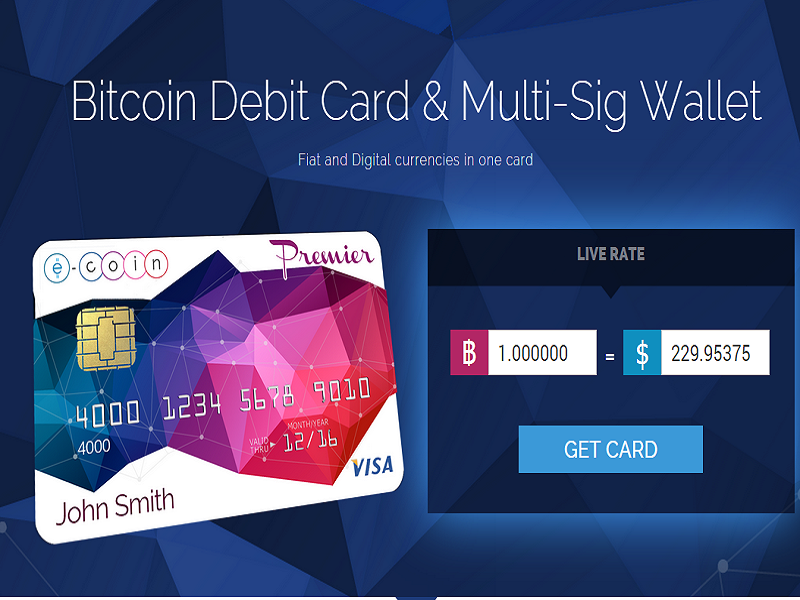 Many of you may be familiar with services offered by payment processors such as Neteller in which you can create a virtual credit card and use said card for online purchases, anything that would not involve presenting the card in-person. Well, E-Coin is bringing the same feature into its bitcoin debit card service. If you want a bitcoin debit card to use solely for online purchases or Paypal, this is the way to go. You skip the necessity of waiting for your card to arrive and can start using it immediately. E-Coin uses BitGo multi-sig for security.

The virtual debit cards are supposed to be setup instantly, a feature that we must see in action in order to prove its validity. It is unclear if the withdrawal limits on these virtual debit cards will be the same as their plastic counterparts, but the E-Coin team has said that the withdrawal limits can be risen through the submission of verification documents to confirm each person’s identity. E-Coin founder Pavel Matveev shared a few words on the announcement:

“Now, anyone can spend bitcoin at any website that does not already accept it”

Many companies that offer bitcoin debit cards are in constant scrutiny due to their inability so ship their debit cards to countries such as the U.S and India. E-Coin’s virtual bitcoin debit cards solve this problem by removing the need to ship the debit cards. It would be a surprise if these virtual debit cards were not available in most countries, if not all. However, the possibility remains that they may not be available at the time being. Whether it is or not, in a regulated world where countries seem to purposely sabotage bitcoin into failure with new regulations, an aggressive move by E-Coin should prove to satisfy the consumer need to use their bitcoins.

E-Coin is making a big statement to its competitors by forcing them into taking a similar approach to theirs. It is, without a doubt, a big announcement for users wanting to use their bitcoin through a debit card, without having to own a plastic one. I look forward to seeing more announcements by the E-Coin team and admire their effort to bring innovative payment methods into the bitcoin platform.

Will you use E-Coin’s Virtual Bitcoin Debit Cards? Let us know in the comments below!