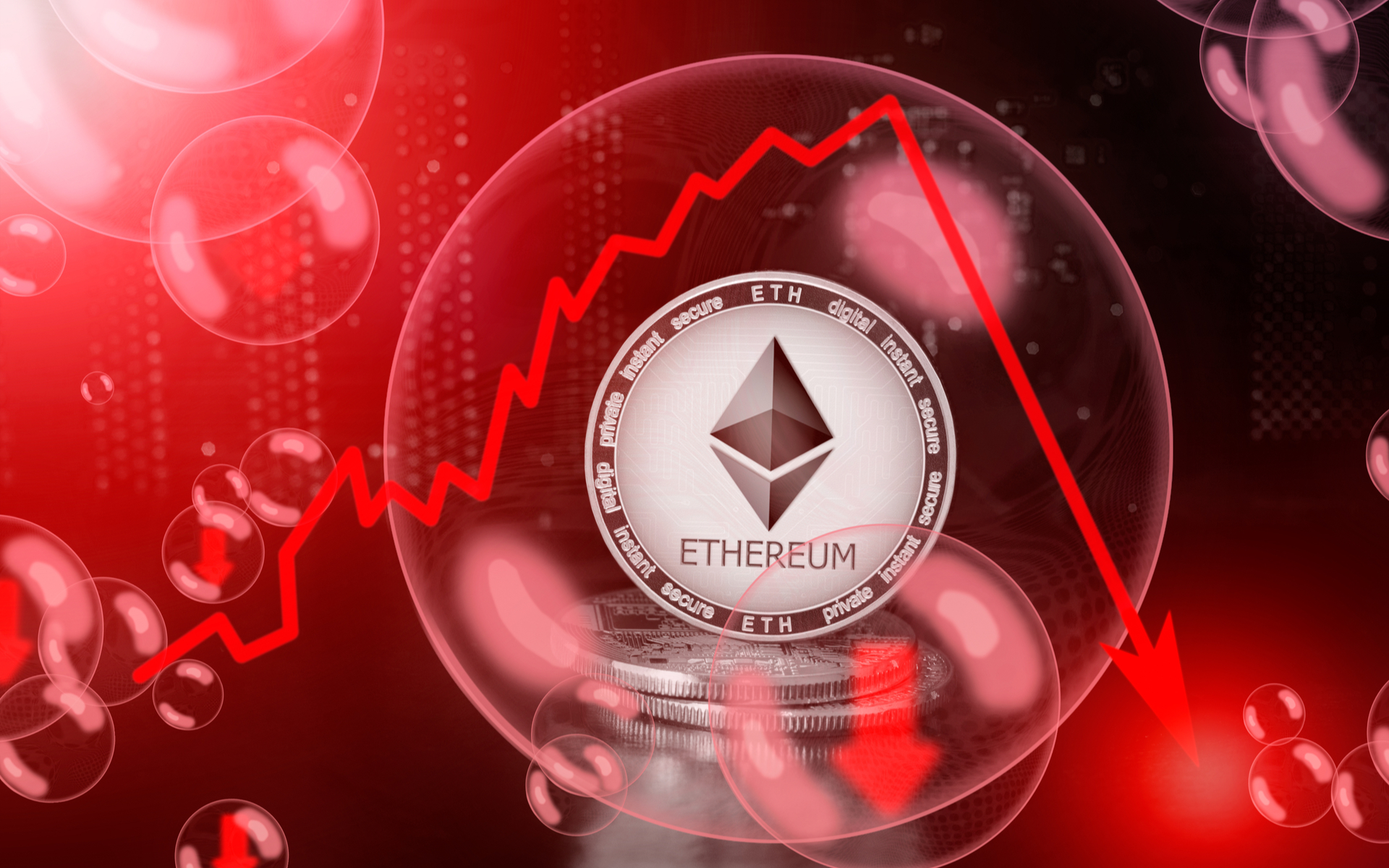 by Smith
in Trading, Altcoin Price, Ethereum, Markets and Prices
0

Ethereum price recently broke out of a period of consolidation as mentioned in my previous analysis on ETH, completing an asymmetrical triangle in favors of the bulls but has since begun a pullback breaking the short-term support. Bears now eye $190 support around the visible range low. 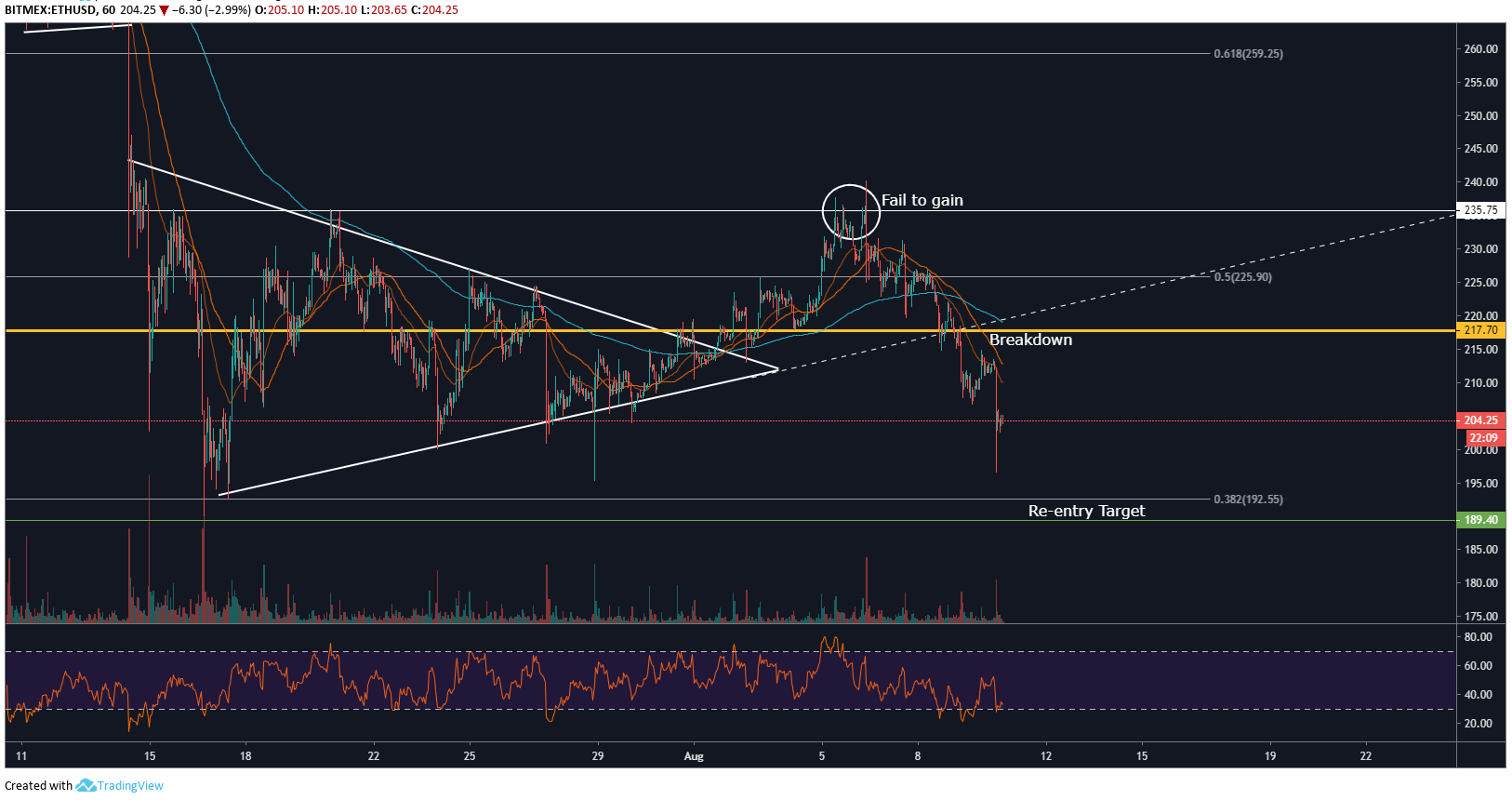 On the 1 hour chart for ETH/USD, we can see how price action progressed after the breakout. Price levels tested $240 resistance and failed to gain on the 6th of August resulting in a rejection causing a pull-back to break the short-term support around $217. Since then price levels have continued to drop and looks poised to re-test the visible range low at $189 just below the 0.382 Fibonacci level.

It’s important to note that volume remains reasonably low on this pull-back and will need to see a drastic increase in selling momentum to cause a crash through $189 support making it likely that a bounce could happen as market price tests this key support price level. RSI just hovering above 20.00 being oversold indicates selling momentum has control over market price. 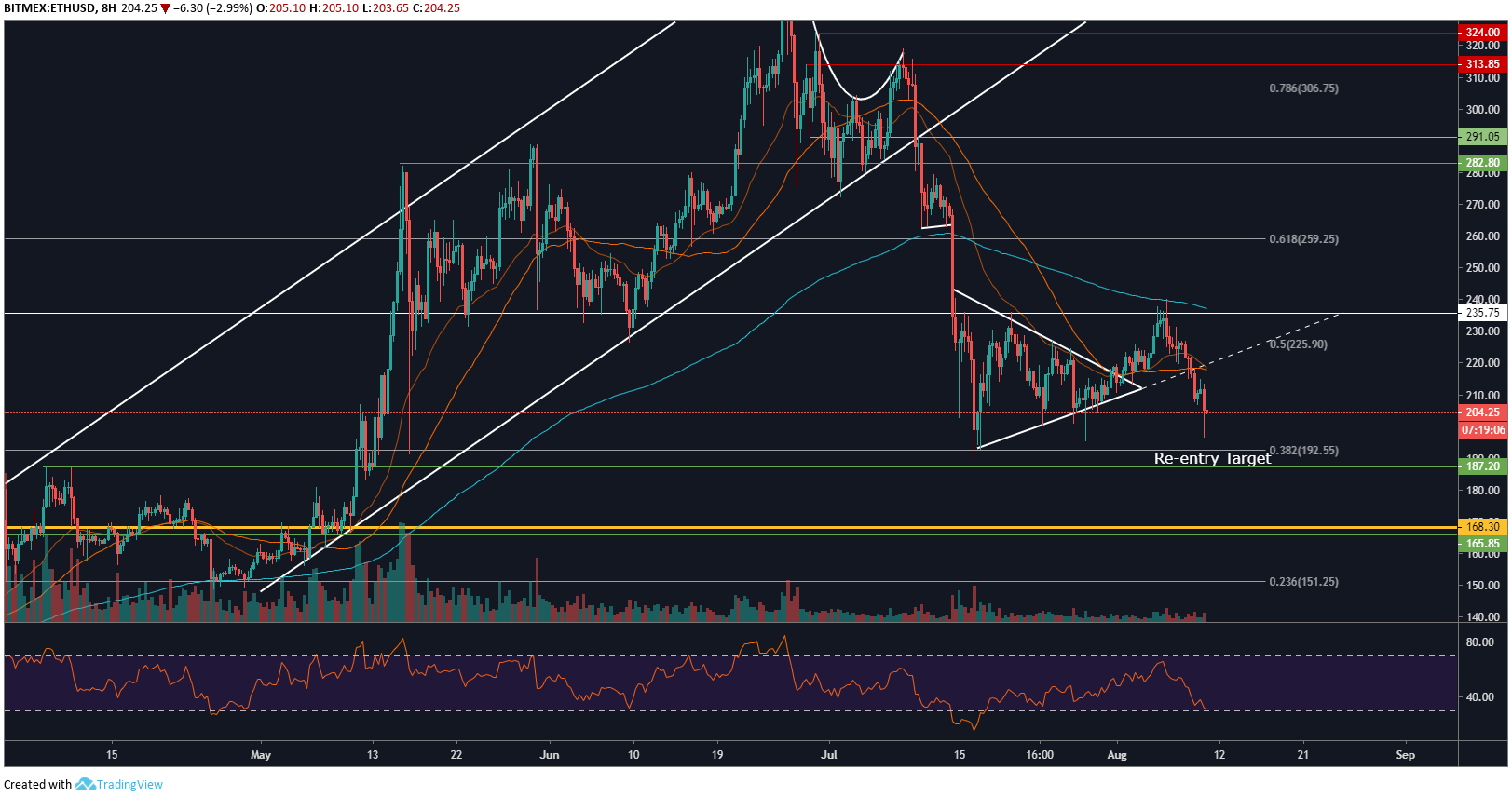 On the 8 Hour chart for ETH/USD, we can see where the support at $189 originates from being the local top throughout the middle of April just before price levels broke out and swiftly tested $282 resistance thereafter. RSI has yet to hit oversold zone but appears to be clearly heading in that trajectory, by the time the market price which is currently $204 tests support at $189 it’s likely RSI will be fully oversold presenting a good reason to consider re-entering at this level.

200 EMA can be seen acting as resistance at the local top mentioned on the 6th of August at $240 meaning the recent breakout was a failure to gain aka fakeout as the necessary volume needed for price levels to sustain a new short-term bullish uptrend didn’t arrive. The volume appears to be almost flatlining now in comparison to volume seen throughout April, May, and even June. POC (Point of Control) sits at $168 and will be the next key support level to look out for if $189 breaks.

15 SMMA and 50 MA can be seen just about to cross down over each-other at the recent support break-down point at $218. This could signal much further downside to come so it’s important to practice effective risk management when taking any trades on ETH/USD over the coming days and weeks.

Do you think the volume necessary to propel ETH/USD higher will arrive in the coming days? Please leave your thoughts in the comments below!