How to CFD trading British pound amidst the Brexit news

How to CFD trading British pound amidst the Brexit news

Since the Brexit referendum in June 2016 GBPUSD, EURGBP and other pound sterling forex pairs have been attractive instruments for news traders, who base their strategies on political and macroeconomic events, as well as for the technical traders. In the next two months, things are going to get even better as the volatility will increase with the Brexit deadline approaching.

If you are considering putting some more time and money in trading pound sterling in the weeks to come, read this comprehensive analysis by SimpleFX WebTrader.

When following politics can earn you money

What makes Brexit exciting for forex traders are the uncertainties. There is just one thing sure after the referendum in June 2016. The UK is due to leave the European Union on March 29, 2019.

Here’s the one-week GBP/USD chart. The horizontal line marks the week of the Brexit referendum. The British pound has been the most volatile developed market currency since the June 2016 Brexit referendum, still not as explosive as USD/ZAR, USD/TRY or USD/HUF. 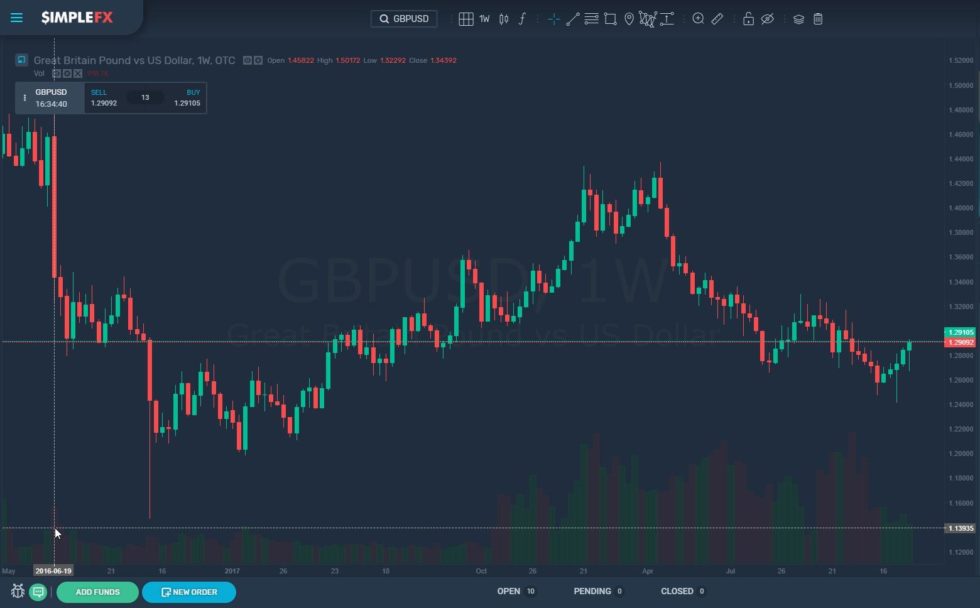 We don’t know the terms the UK is going to exit the EU. We don’t know if they are going to leave at all. Theresa May’s government has a challenging task of pleasing her party’s core supporters, who are in favor of Brexit, the majority of the population, who seem to be against it now, the global investors, local businesses, and more.

The fundamentals would suggest that GBP/USD at 1.30 is a little bit low. Traders could seek for signs of some positive Brexit scenarios and include this upside in their long term strategies. 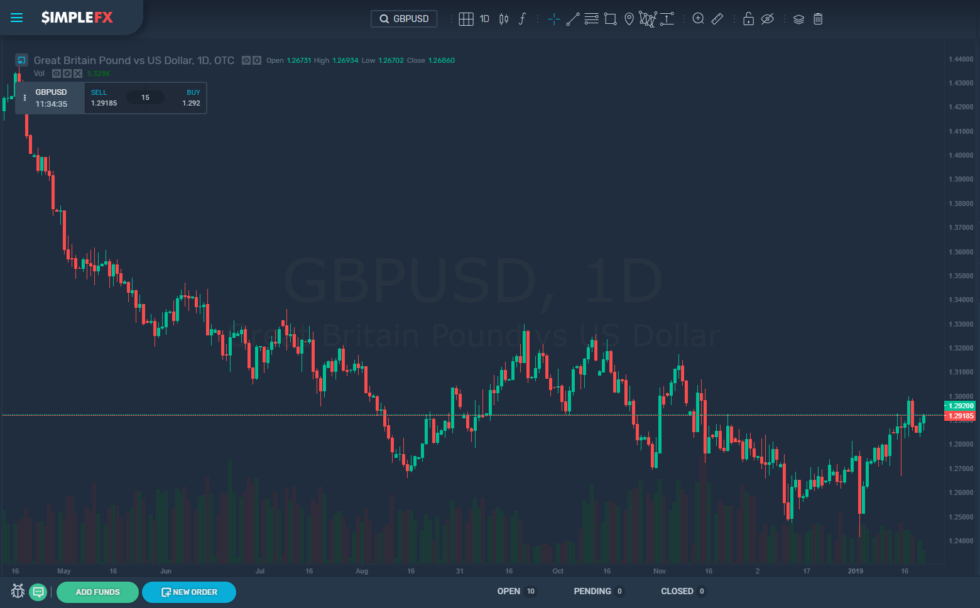 When analyzing this pair, you should remember about the USD macroeconomic background. Donald Trump’s presidency brings a lot of political uncertainty and forex volatility.

Nevertheless, USD had a healthy 2018, when it appreciated. However, it seems to slow down recently as fiscal, and current account deficits are looming. On the other hand, tax cuts and deregulation should have a positive impact on the GDP growth in the next years.

The long-term dollar is expected to weaken as the Federal Reserve’s rate hiking cycle, and balance sheet tapering stops. The US will start to face the financial reality of fiscal and current account deficits that are beginning to increasingly strain the country’s finances and become a drag on growth.

The two economies are involved directly in the Brexit saga. The deal or no deal dilemma affects the two sides directly. No wonder the pair has been a rollercoaster recently. 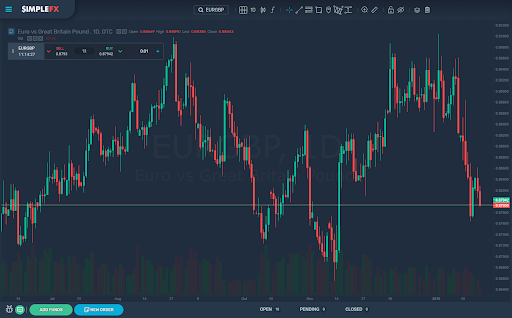 The same uncertainties affect both sides here, so it was possible that despite the turmoil in the UK government, where Theresa May was on a brink of losing the no-confidence vote, the British Pound gained over 1 percent last week. 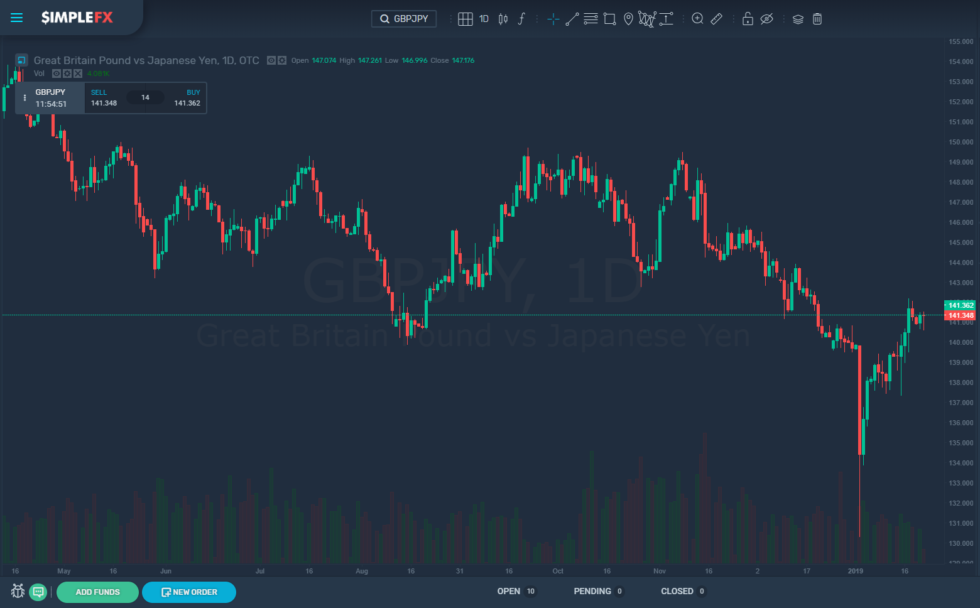 The Japanese Yen is a safe haven currency that investors buy during times of global market uncertainty. If you want to base your strategy on your perception of the British-centered events and data concerning the British economy you could try trading GBPJPY.

However you should remember that Japan also has its worries, there are some concerns about the inflation in Japan. If you want to trade GDB against a stable currency Swiss Franc (CHF) could be a nice alternative.

The Australian dollar is an interesting choice if you are looking for some more volatility and want to trade away from EUR, USD or JPY. The Australian economy is on the outskirts of the leading global power hubs. It’s closely connected to the UK but increasingly closer to Asia. 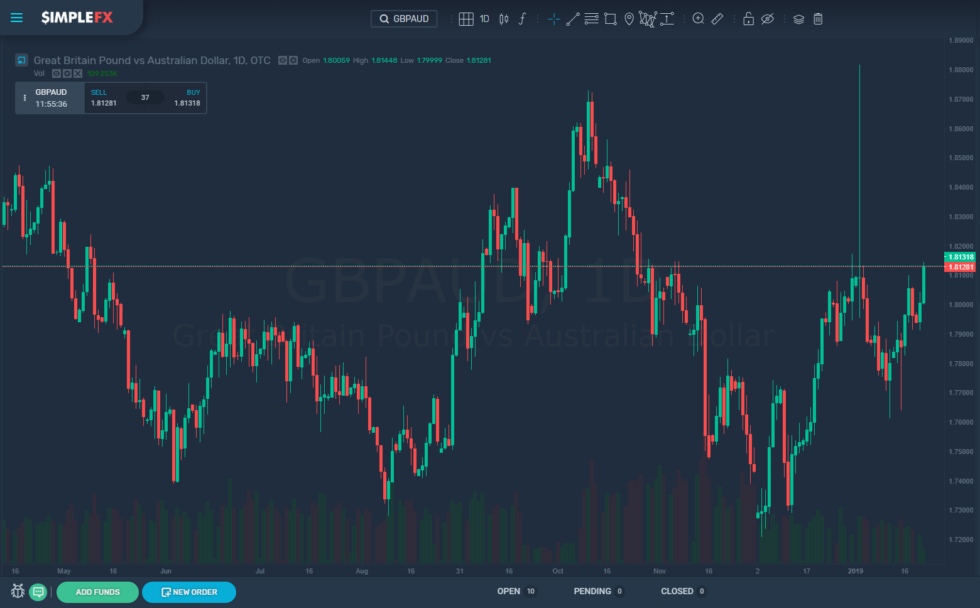 If you want to build your trading strategy around global geopolitics and macroeconomic trends and benefit from the Brexit uncertainties, Australian Dollar may be a good pair for the pound sterling.

Take advantage of the unique opportunity

We are entering the peak of Brexit uncertainty, and this means it may be the best period to trade British pound. Make sure you don’t miss this opportunity and try to ride the GBP roller-coaster.

Get down to it now; there’s no time to waste. If you are a beginner forex trader try putting your pound sterling strategies into action with a demo account, and then move to trade on a live account with no minimum deposits. If you have some experience, you may try to make some real money during the upcoming days.

Choose a fast, convenient and reliable tool with low spreads, and no minimum deposits, such as SimpleFX WebTrader.

The Tachyon (IPX) team has introduced a community-driven staking model to break down entry barriers to its decentralized VPN node network.  Unlike traditional CPU / GPU mining or...

How to Trade Ethereum Online

Ethereum is a hot asset today. The high volatility of this cryptocurrency offers more opportunities for profitable trade hunts. Last week, ETH bounced back above $200 with a 3.5%...

Top up prepaid mobile airtime with BTC, ETH, XRP, LTC; and CRO with up to 5% cashback Hong Kong, 25 May 2020: Crypto.com announces today the launch of Pay Airtime. The new feature...