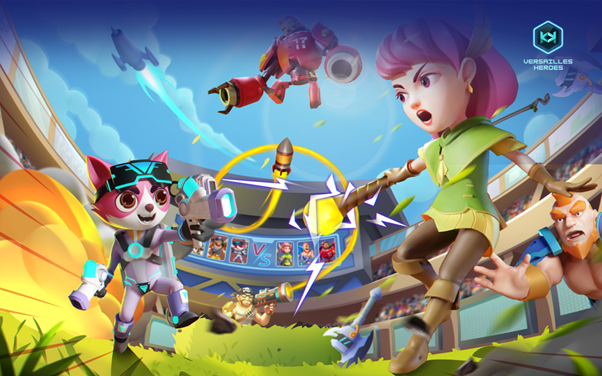 Non-fungible tokens, commonly known as NFTs, are growing in popularity nowadays as their benefits go beyond simply owning digital assets. NFTs are digital representations of real-world objects such as art, music, videos, and many more. This means that it can be applied to anything, and video game developers have been utilizing this trend to offer gamers a more exciting gaming experience. NFT-based video games enable players to earn rewards in crypto, which can be exchanged for real money.

The newest MOBA NFT-based game, Versailles Heroes, is sweeping the crypto and gaming industry by storm. It is now the fastest-growing blockchain game, given that players may make money or earn rewards simply by playing. Versailles Heroes has a lot of interesting and exciting gameplay, which makes it a highly preferred game above others in the same field.

What is “Versailles Heroes”?

Versailles Heroes is a multiplayer online battle arena game managed by smart contracts for DAO governance and operates in the GameFi and Metaverse sectors, intending to have a game that players can fully control. To achieve the ultimate open, fair, decentralized governance model, the developers have placed their business and governance regulations on the blockchain.

How does it work?

The playable NFT heroes of Versailles come in various classes and rarities, each with their unique set of abilities, skills, and powers to discover and master. Some are free, while others are purchasable through the marketplace or drop from mystery boxes, which are also available in the marketplace. The heroes can also equip unique weapons dropped from the weapon mystery box. Players can gain bonuses that boost the number of game tokens rewarded through gameplay based on their hero’s rarity, weapon, and ranking.

Playing to earn with Versailles Heroes

Game players can pick from various modes, including standard battle modes like battle royale and death-match, as well as inhibitor rush mode, trophy collecting mode, and wager battles where they can gamble tokens and win large. A player can earn virtual gMOH tokens by playing each game mode, which can then be converted to the official P2E cryptocurrency token MOH at a 1:1 ratio and stored in a crypto wallet to be traded for other crypto or fiat currencies.

Furthermore, MOH tokens can be converted into GAS, which is utilized to increase mining yield. Guilds mine the DAO governance token VRH for their members and can increase their reward rate by up to 2.5 times by burning GAS converted from MOH. Players must lock up a certain amount of VRH for veVRH in order to join a guild. veVRH represents the voting weight for various community-pitched proposals that can affect the direction of the game and its community, allowing for the dynamic growth of the game’s ecosystem.

Gamers are anticipating the full release

Versailles Heroes is an addictive MOBA NFT-based game sweeping the gaming industry. The game is easy to pick up and play and is extremely exciting. The game has a great community and is full of awesome content, and is definitely worth checking out as it is sure to keep players entertained for hours on end.