It was just a few days ago that news broke alleging “insider trading” after a botched Bitcoin Cash launch which saw prices spiking close to $9000. Now, new evidence has emerged appearing to bolster those allegations.

Entrepreneur and cryptocurrency enthusiast Albert Renshaw is claiming that he has discovered additional evidence pointing to insider trading of Bitcoin Cash related to its recent adoption by Coinbase and their cryptocurrency exchange, GDAX.

I’ve found and isolated one instance of insider trading on BCH addition to GDAX/Coinbase.

He references the following discussion thread that took place on /r/Coinbase: 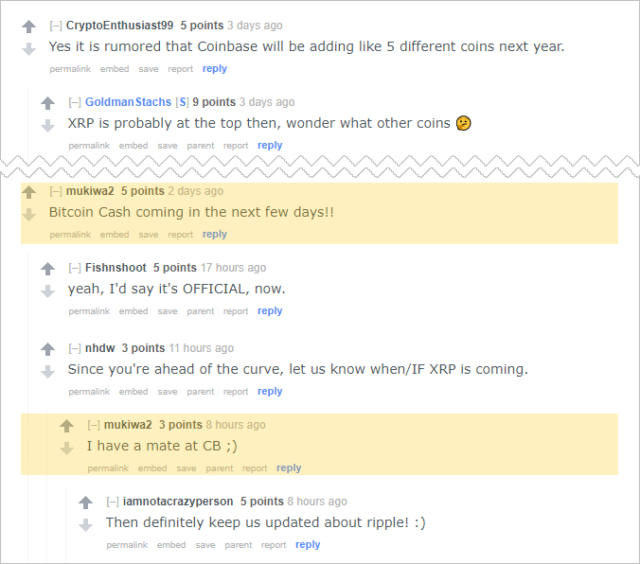 The highlighted comments in the thread have since been deleted, however, the conversation was archived in its entirety at Archive.is.

The screenshot above focuses primarily on the comments of one Redditor, /u/mukiwa2. The conversation was archived on December 20, 2017, making the ‘2 days ago’ time stamp (see mukiwa2’s first highlighted comment) December 18 – a day before Coinbase announced their addition of Bitcoin Cash.

Well, that’s where things start to get murky. Nobody knows. Shortly after the crypto community began calling Coinbase out over possible insider trading, /u/mukiwa2 deleted his comments from the thread. Shortly thereafter, he deleted his account entirely. Bitcoinist was able to dig up a cached copy of his Redditor profile page, but that provided little information other than the fact that it was a new account, created on December 6, 2017. 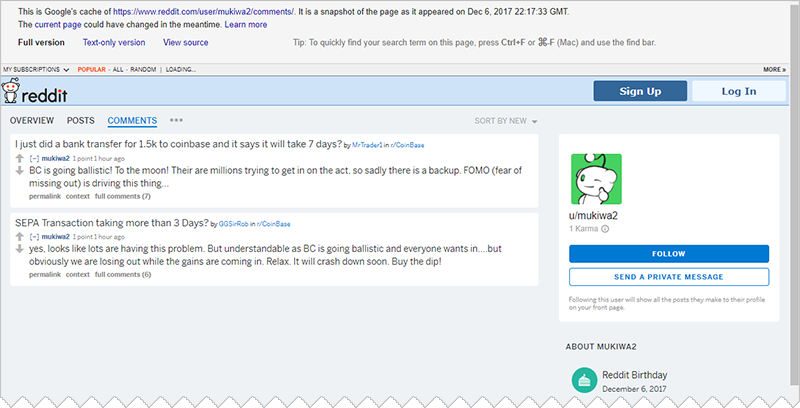 Some further research yielded some possible clues to his identity, and Bitcoinist has reached out to this person for confirmation and possible comment. At the time of this writing, we have received no response.

So What Happens Next?

In the wee hours of the morning on December 20, Coinbase issued a statement via Twitter that all of its employees have been prohibited from trading Bitcoin Cash for several weeks. Coinbase CEO Brian Armstrong addressed the matter personally, as well. In a blog post published on the same day, Armstrong clarified Coinbase’s employee trading policy and also addressed the accusations of insider trading, stating:

Given the price increase in the hours leading up the announcement, we will be conducting an investigation into this matter. If we find evidence of any employee or contractor violating our policies — directly or indirectly — I will not hesitate to terminate the employee immediately and take appropriate legal action.

This is all well and good, but it’s a little bit like shutting the barn door after the horse has already bolted. It doesn’t change what happened, if insider trading did, indeed, take place, and it doesn’t prevent it from happening again in the future with some other coin on some other exchange.

Coinbase maintains a strict trading policy and internal guidelines for employees. Coinbase employees have been prohibited from trading in Bitcoin Cash for several weeks.

While it is heartening that Armstrong isn’t simply dismissing the accusations, the whole idea of an internal investigation being offered up as a panacea should be concerning to the entire crypto community. If a non-crypto investment firm were accused of insider trading, there would be no self-policing. The SEC would investigate the company and, if found guilty, the parties responsible would face fines and most likely jail time.

The crypto community is at a crossroad. On the one hand, they don’t want regulators mucking about and trying to control things. On the other hand, when something goes wrong – like an exchange being hacked or insider trading – they clamor for the protection that only regulation would provide. There is no simple solution, but one thing is clear – we can’t have it both ways.

Does this new information change your opinion on Coinbase’s involvement (or lack of involvement) in insider trading? Let us know in the comments below.