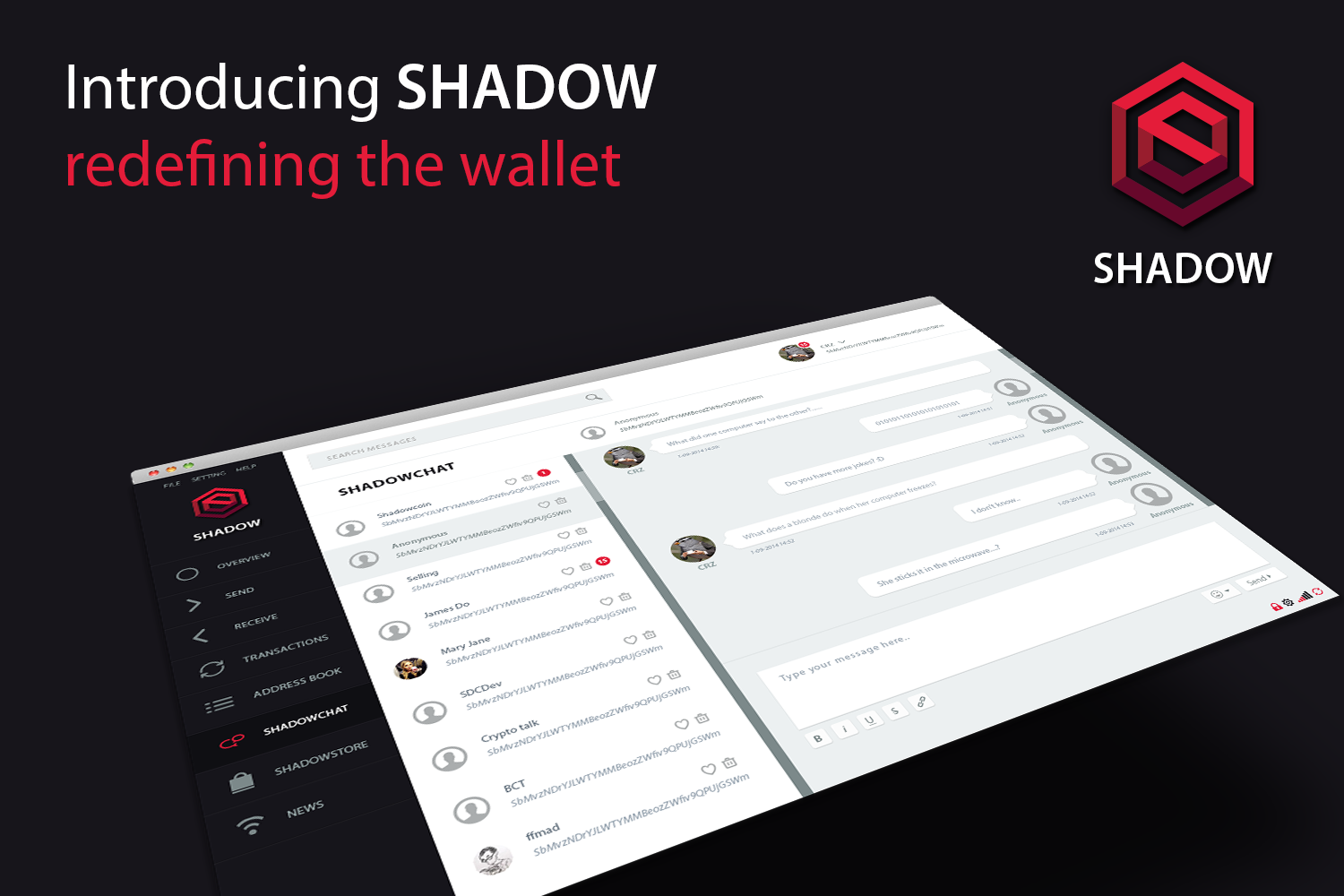 Since our last interview and the released of Shadowsend, Shadowcoin has been staying true to their development road map and has recovered amidst the argument between Shadowcoin and Stealthcoin. I’m here again with the Shadow team to talk about their new html5 wallet, along with what the future holds.

1. Since we lasted chatted, how have things been?

Things have been great, thanks for asking! We’ve been really busy strengthening our core foundations to support the Shadow ecosystem. We’ve logged over 500+ developer hours on our new interface and another 400+ hours on our Lite wallet functionality.

2. What’s been accomplished since?

We had an addition to Shadow’s team over the weekend. Ludx, the developer of the first anonymous crypto-currency SMS solution with his work on CloakPal, has joined our core team. We’re excited to have him onboard and look forward to his contributions to the project.
We’ve also succeeded in attracting regional managers that will help develop communities and promote Shadow within the Chinese (Fox), Indian (Vikki), Russian (Alnoor), French (ffmad) and Spanish (Kamui) markets.

Around the time of our last interaction we released the first mobile wallets that support staking for Android and iOS platforms.
A few weeks ago we released the first Simplified Payment Verification system (SPV) for a Proof-of-Stake coin (ShadowLite). When setup correctly, the client will go into “thin” mode reducing blockchain sync time, while still securing the network. The experience is similar to Multibit.

On Thursday, we released our latest accomplishment: The first modular HTML5/CSS3/JS “Cryptobrowser”, which effectively creates a new type of application framework. We’ve made sure not to put passwords or anything insecure in Javascript or Html, so its totally safe. To the best of our knowledge, this is the first time this type of framework has been layered directly on top of a client-side cryptocurrency without using external service calls. Our privacy counterparts at DarkWallet are building their wallet into a browser, we’re doing the opposite as we’ve built our framework into a wallet. The new interface provides a much better experience for the end-user.

Other than the new releases, we’ve done loads of R&D on our upcoming voice, video and file attachment update to ShadowChat. In addition, our new zero knowledge protocol has seen major advancements. Recent breakthroughs in cryptography both inside and outside the project insures that our approach to anonymous payment schemes will be unrivaled by any other project to date. We believe our approach will finally put the “anon” debate to rest.

3. Can you explain what zk-snark is?

zk-SNARKs stands for Zero-Knowledge Succinct Non-interactive ARgument of Knowledge
Zero knowledge: the verifier learns nothing from the proof beside the truth of the statement.
Succinctness: the proof is short and easy to verify.

Non-interactivity: the proof is a string (i.e. it does not require back-and-forth interaction between the prover and the verifier).
Soundness:  the proof is computationally sound (i.e., it is infeasible to fake a proof of a false NP statement). Such a proof system is also called an argument.
Proof of knowledge: the proof attests not just that the NP statement is true, but also that the prover knows why.

4. Could you explain a little bit about Shadowsend, and how it helps the goals and motives Shadow Cash has?

ShadowSend is our core privacy platform for Shadow. When we set out to create Shadow one of our primary objectives was to provide the highest level of financial privacy for users. ShadowSend represents this effort.

5. How does Shadowsend v2 improve upon the implementation versus earlier releases?

ShadowSend v1 was our dual key stealth address implementation. We open sourced this to the community and as a result there are countless coin projects that now have stealth addresses integrated into their project for an extra layer of financial privacy.

ShadowSend v2 is the latest installment of our privacy platform. v1 only provided a minor level of privacy by making transactions unlinkable. v2 is our effort to make them untraceable.

We can’t release too much details about this as the technology is improving day by day. By the time anyone reads this it would already be outdated. What we can say is we’re combining the latest advancements in zero knowledge cryptography to make a trustless untraceable scheme unrivaled by anything under development.

6. What may the future hold? 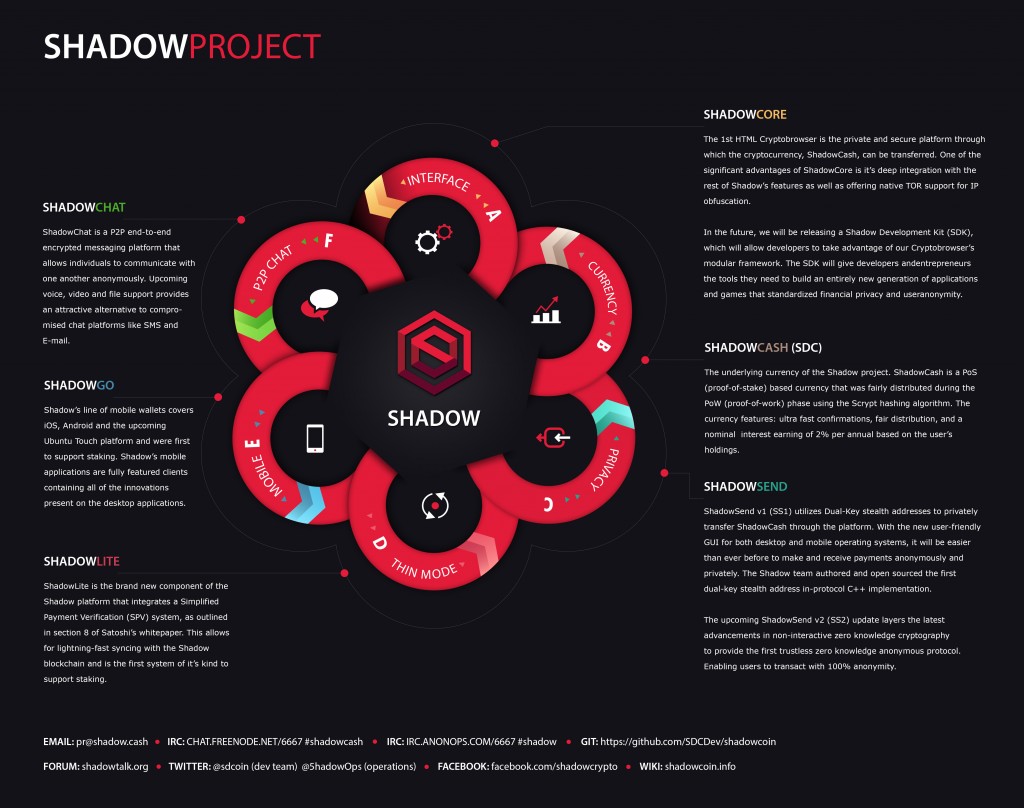 In the last interview we stated we wanted to become the anti-google, a privacy ecosystem that offers all the same value without sacrificing personal liberties or individual privacy.

Our new interface is the first step major step in that direction. It’s modular and provides an excellent platform for developers looking to take full advantage of our privacy technology.

In the near future, we’ll be releasing a Shadow SDK, contributing developers to create apps similar to those found on GooglePlay or the Chrome Webstore. We believe an entirely new generation of zero knowledge privacy applications and games will be born out of Shadow.

We’ve been fortunate enough to have a strong community stand behind us during these long development cycles. As the project moves forward it will continue to grow organically and continue to innovate the cryptocurrency space.

We’re planning a giveaway on www.8btc.com and it will be the 1st ever in-client giveaway utilizing ShadowChat for P2P communication.

Keep an eye out on our new weibo account for more details!