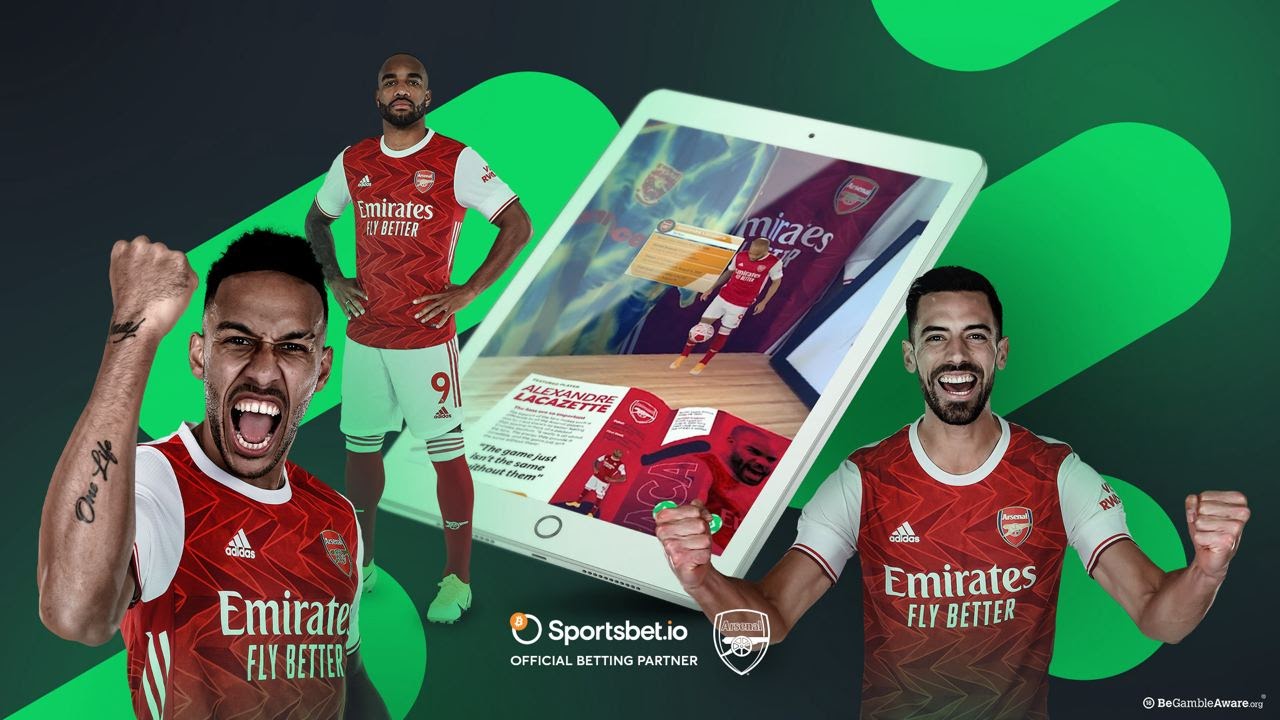 May 13th, 2021, Tallinn, Estonia — The new augmented reality matchday programme uses the latest AR technology to let fans bring the players into their living room. The creative concept aims to leverage Sportsbet.io’s matchday rights with the Gunners digitally, recreating the magic of matchday at home.

The activity brings to life all the components of a traditional matchday programme with an innovative twist and includes Captain’s Notes from a virtual Pierre-Emerick Aubameyang alongside player profiles, quickfire interviews, footage from the training ground and an interactive AR squad selector that lets fans pick their team for the match ahead.

With the majority of matches from the 2020/21 season being carried out behind closed doors due to covid-19, the AR programme allows fans to enjoy one of the key elements of their usual matchday routine from the safety of their own home, and keeps them connected to both the players and the club.

Sportsbet.io are using their partnerships in football to redefine the fan experience by combining cutting-edge technology with their cryptocurrency expertise, delivering exclusive experiences that reward Arsenal’s large global fanbase and Sportsbet.io customers. The initiative is a demonstration of Sportsbet.io’s constant drive to innovate and the sportsbook believe that the role of cryptocurrency in sport is only going to increase.

The programme will be hosted on a private Sportsbet.io app and activated via influencers for the remainder of the 20202/21 season. The first two influencer activations went live in April, with world champion freestyler Sean Garnier and Entrepreneur come Gooner, Leo Dasilva.

“We are always looking for new ways to connect and engage with our global fanbase and give them an incredible experience, whether that’s inside Emirates Stadium or in their own home. Sportsbet.io shares this attitude and approach and it has been fantastic to work together to deliver this new and innovative service to our supporters. Everyone at the club is extremely excited to welcome all our supporters back to Emirates Stadium imminently, but until then this programme is an exciting and innovative way of bringing fans closer to the players, and the action, than ever before.”

This is the second virtual matchday initiative developed by Sportsbet.io’s creative and PR agency Fuse for their Premier League club partnerships, alongside the virtual reality stadium tours delivered with Southampton FC. The initiative was developed by Fuse in response to the Covid-19 pandemic, working as a digital solution to activating matchday rights in a behind-closed-doors environment.

“Across all of our Premier League partnerships this season, we have strived to use the latest in tech and innovation to try and bring a little bit of that magic of matchday to the fans at home. We are lucky to have two incredible partners in Arsenal and Southampton, who have got fully behind this mission and helped us deliver some amazing work. We are thrilled to be launching this new AR programme with Arsenal, and can’t wait to make the partnership even bigger and better next year.”

About Sportsbet.io
Founded in 2016 as part of the Coingaming Group, Sportsbet.io is the leading Bitcoin sportsbook. Sportsbet.io has redefined the online betting space by combining cutting-edge technology, with cryptocurrency expertise and a passion for offering its players with the ultimate fun, fast and fair gaming experience.

Principal sponsors of English Premier League team, Southampton FC and Official Betting Partner of Arsenal Football Club, Sportsbet.io provides an expansive range of betting action across all major sports and eSports, offering players more than 350,000 pre-match events per year and comprehensive in-play content. As the first crypto sportsbook to introduce streaming across all major sports, as well as a cash out function, Sportsbet.io is recognised as a leader in both online sports betting and within the crypto community.Sportsbet.io prides itself on its secure and trustworthy betting service, with withdrawal times of around 1.5 minutes among the fastest in the industry. For more information about Sportsbet.io, please visit https://sportsbet.io.

Sportbet.io is the source of this content. This Press Release is for informational purposes only. The information does not constitute investment advice or an offer to invest.