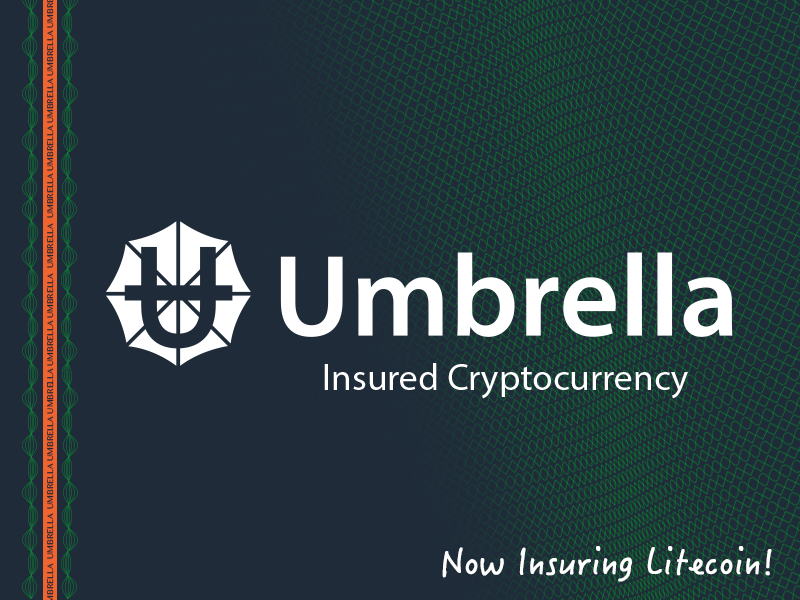 Cryptocurrency is a world full of “firsts”. Bitcoin was the first coin, Litecoin was the first scrypt coin, Peercoin first established POS, Darkcoin was the first successful privacy centric coin, things like that. Today I’m here with Robert Murray, owner and founder of Umbrella Holdings. Umbrella plans on releasing cryptocurrencies which will help insure losses against Bitcoin and Litecoin right now, with potentially more in the future. 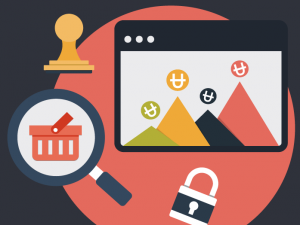 Umbrella is an insured cryptocurrency that is designed to be merged-mined alongside a parent coin, usually the industry leader in terms of market cap for its particular algorithm.  You can also solo mine Umbrella like you would any other cryptocurrency.  In regards to Umbrella-LTC, we have just announced a beta program to insure its parent coin (Litecoin).  Starting in November, if you hold a predetermined amount of Umbrella-LTC (let’s call this the premium) your Litecoin will be insured.

Umbrella differs from other cryptocurrencies by automatically sending a portion of each block reward to a secure wallet as it’s mined.  This growing fund serves as collateral should a claim arise due to a hack or insolvency on the exchange.  To combat fraud and reduce our risk, we put the exchange through a security audit.  By leveraging our background in security, we essentially try to hack the exchange (with consent of course).

Once the exchange is deemed secure, we guarantee all Umbrella Holdings while held on that exchange.  It’s important to note that while any exchange can list Umbrella cryptocurrencies, only those listed as certified have gone through the security audit and are insured.

What do you plan on providing with Umbrella?

We want to fix the biggest problem in crypto, which is security.  If we ever hope to see mass adoption this needs to be addressed.

How does Umbrella achieve this?

With our multifaceted approach to security, we work at the exchange level and user level.

We can reduce risk by a large magnitude simply by increasing transparency at the exchange level and performing regular security audits.  At the user level we offer insurance to protect the user’s assets, and in the near future a secure trading environment to store assets locally while still being insured.

We see a lot of coins bringing new innovations and products (2.0 technologies) to the table but no one is really solving the problems that still plague our first generation coins.  We want to be at the forefront of this movement. 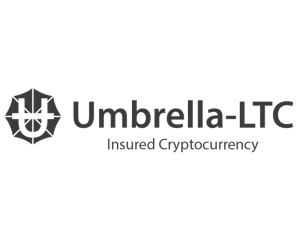 Can you tell me a little bit about your relationship with CDIC?

The CDIC is a group of individuals I have worked with for many years.  They are day traders based out of New York trying to break into the cryptocurrency space.  They played a small role in the coins initial development but had bigger plans of launching their own exchange.  They were going to provide third party services to us for claims and investigations. 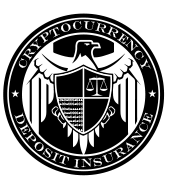 Once word came down about regulation in New York they got cold feet.  At this point Umbrella started to pick up a little steam in the community and had some really great people reaching out to us wanting to get involved in any way possible because they believed in the vision.  This is when we decided that we can fulfil the duties of the CDIC with a dedicated board.  As long as the board members get voted in and are vetted we should have no problems rendering judgments on claims and conducting our own investigations.

We will officially be bringing the insurance portion in-house at the end of this month.  Sadly, the CDIC will be closing up shop.  I think this all worked out for the betterment of the coin, some people were a bit weary of a third party controlling the insurance fund.  Now this process is less centralized with voted-in members holding the insurance fund in a multi-sig wallet.

What motivated the creation of Umbrella?

I got into cryptocurrencies last year during the mining craze.  I started building high-end mining frames out of my garage.  The company was called SLUICE_BOX Cases, and we did very well before scrypt ASIC’s arrived on the scene and killed us.  Our first month we moved over 100 cases and I was working 100 hour weeks.  We managed to get every order out and maintain 100% positive feedback during the process. 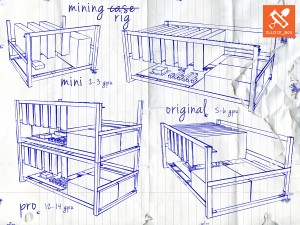 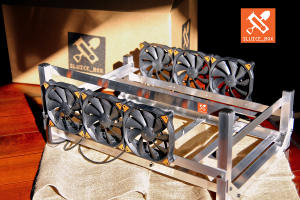 During this period I got to meet a lot of miners and witnessed firsthand the struggles and hardships of mining.  They dealt with ever shrinking profits, outrageous electric bills, price gouging from once trusted retailers (I’m looking at you Newegg).  Then on top of all that we had exchanges and pools closing up shop taking what little profits remained.  It was a real nightmare and a very clear problem.

The development of Umbrella was spurred by these experiences.  I wanted to be part of the solution and figure out a way to help the situation.  Realizing there was no easy way to fix this, I began work on the multi-pronged approach that is Umbrella.

Will there perhaps be an Umbrella coin for X11 and other algorithm coins?

Umbrella is a brand, not a coin.  We will be making several Umbrella products in the coming months.  There are plans on the table for Umbrella cryptocurrencies at each algorithm.  This will allow almost everyone to merge-mine insurance without giving up on their primary coin.

What can we expect in the future?

In the next year expect more Umbrella cryptocurrencies, proof of liabilities software that the exchange must have installed, our own Linux distro (Umbrella-NIX) for locally insured coins and some other secret stuff I can’t tell you.

We envision cryptocurrencies going mainstream in a big way.  I think in the next two years we will start to see large companies acquiring established cryptocurrencies.  Coins that complement the company’s portfolio or industry, or simply to shorten their own development cycle.  Why would Geico Insurance create their own cryptocurrency when they can just buy us for a few million?

That’s a few years down the road though….Thank you for the interview!

Thank you Robert for having the time to sit down with me! It was truly a pleasure!
Photo Sources: Umbrella Holdings
For more information please visit: http://www.umbrella.holdings/