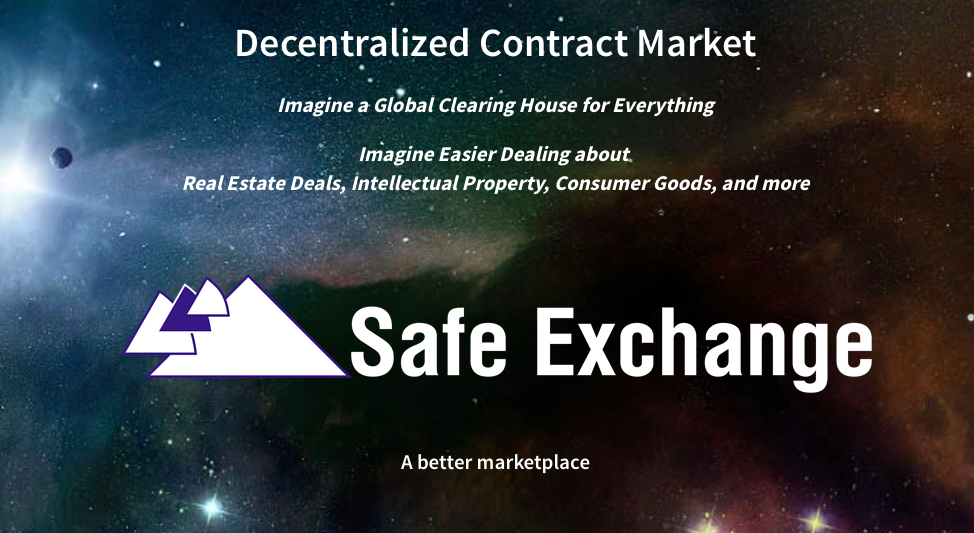 The Safe Exchange is proud to release 99% ownership of the Decentralized Board of Trade (DBOT), a blockchain based exchange governance system that oversees the anonymous exchange built on the SAFE Network. This sale is taking place on the website http://safex.io/sale.

The Safe Exchange itself is a platform which anyone can use to arrange and settle Safe Contracts which can be as private or public, as identified or anonymous as the participants chose. The result is a marketplace capable of allowing purchase and sale of goods and services, as well as settlement of a virtually unlimited variety of other exchanges amongst individuals or groups (e.g., stocks, bonds, commodities, real estate transaction, and other complex contract deals). Based upon the Financial Information Exchange protocol which already enables settlement of trillions of dollars per day of various exchanges internationally, the Safe Exchange, utilizing the unique privacy and security features of the SAFE Network, will allow exchanges of value comparable to Craigslist, Amazon, ebay, the New York Stock Exchange, Chicago Board of Trade, and more, all rolled into one.

Governance of the Safe Exchange will be accomplished using an open-source, decentralized model called the Decentralized Board of Trade (DBOT). To be a member of the DBOT, and have input into the functioning and governance of the Exchange, it is only necessary to have and use the token called Safe Exchange Coin (SEC). There will only ever be just over 2.12 billion SEC, and 99% of these are being distributed in the current crowd-sale, the purpose of which is to raise the minimal funds necessary to complete development of the platform while establishing broad community participation in the endeavor.
Safe Exchange Coin is not a currency, but an access token which allows its holder to vote or comment on the validity of contracts, vote on issues regarding exchange policy, and also receive dividends from the exchange’s earnings. Details of the functioning of the Exchange and the use of Safe Exchange Coin can be found at Safex.io. The ideal is for the tokens to be distributed broadly around the world, so the crowd-sale is being conducted in “auction style,” whereby the share of SEC received by contributors will be proportional to their percentage of contribution.

“I believe that this software will substantially empower people to have the power of disclosure to be in their own hands. And also be protected against the consistent exposure to public ledgers. By allowing people to opt in when disclosing identifying information, we allow the people to gauge the risks first. This is real freedom. That’s what this exchange stands for: People having a say. And they can do that by owning Safe Exchange Coin and participating as members of the Decentralized Board of Trade. I look forward to participating alongside everyone.”

– Founder and System Architect, Daniel Dabek
The Safe Exchange is a project that has its roots in the Safe Network community, a privacy minded community. It is led by a dedicated founder who has been developing the fundamentals of this software for over a year, and has been producing exchange related software for many years. This group has a determination to give people an option that preserves their users information without centralizing the data.