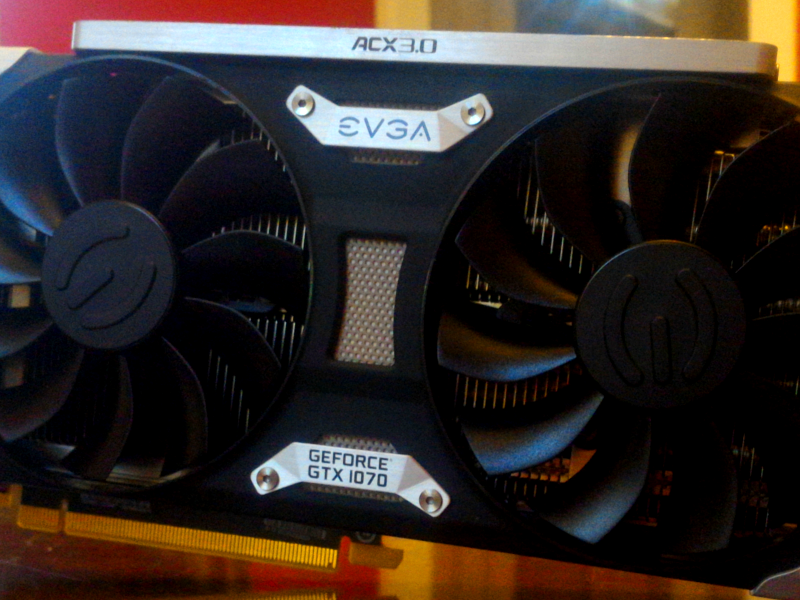 EVGA is the Largest Supplier of Nvidia GPUs to the US, and Today We’ll Be putting their Newest Mainline aftermarket design to the task of mining Ethereum – One of the last bastions of GPU rig profitability, and certainly the most prominent at present. We’ve seen a huge jump in hash power per watt from AMD with their move to Polaris, as we covered here. EVGA’s Gaming ACX line, while not as extravagant as some of the other 1070 offerings currently on the market (e.g. Their FTW and Classified series cards), comes with several nice features out of the box, including a much needed cooling solution upgrade from the reference design, and in the case of the the base model (This is a review of the SC edition, but after making common adjustments like under-volting and clock rate tweaks, the two should perform near identically) a lower price tag as well. Will the increase in power efficiency and better thermal characteristics that Pascal enjoys while gaming carry over to mining applications? If so, We’ll be evaluating if this card will be better suited to it than the “Founders Edition” designs.

With the numbers out of the way, Let’s Get right into the Card’s Features. It has a less spartan industrial design than previous EVGA ACX products, Boasting white LEDs that light up the logo emblazoned on the card’s top, the cooler shroud, and the PCI slot face plate. While this detail is superficial to our performance tests, it may be of concern to those installing smaller nodes in the home depending on their space limitations. The Board seems to be the same as the Reference Card, with the same form factor and power delivery. It also comes with a back plate, as seems to be the standard these days, which may help with shorts in open air rigs running in dusty or humid environments.

Because there are many more variables from card to card in GPU mining than in typical applications, we try to give each card the best chance at performing well within reason. Our goal is to inform the consumer of each GPU’s best-case performance for mining, as the average miner will be highly optimized for that application. By doing some of that optimization for our audience, we give them a good starting point should they decide to purchase a particular GPU. Short of building custom kernels, BIOS tampering, and hardware modification, we tailor the software environment to each card in a similar manner to an individual attempting to build an optimized mining setup. We run A short and long-run test in our standardized benchmarking environment to give the reader a wealth of information, as well as any other tests we think will help give a better idea of each GPU’s performance.
What Changes:

With that explained, here is the system information on our EVGA Gaming SC ACX 3.0 GTX 1070 Benchmark:

Linux had a 2MH/s lead out of the box, so we went with a headless CLI setup for the test to further reduce software overhead, and used the latest stable drivers and CUDA package for our tests. All data is collected directly from the ethminer and nvidia-smi packages. Our first run shows some interesting results: 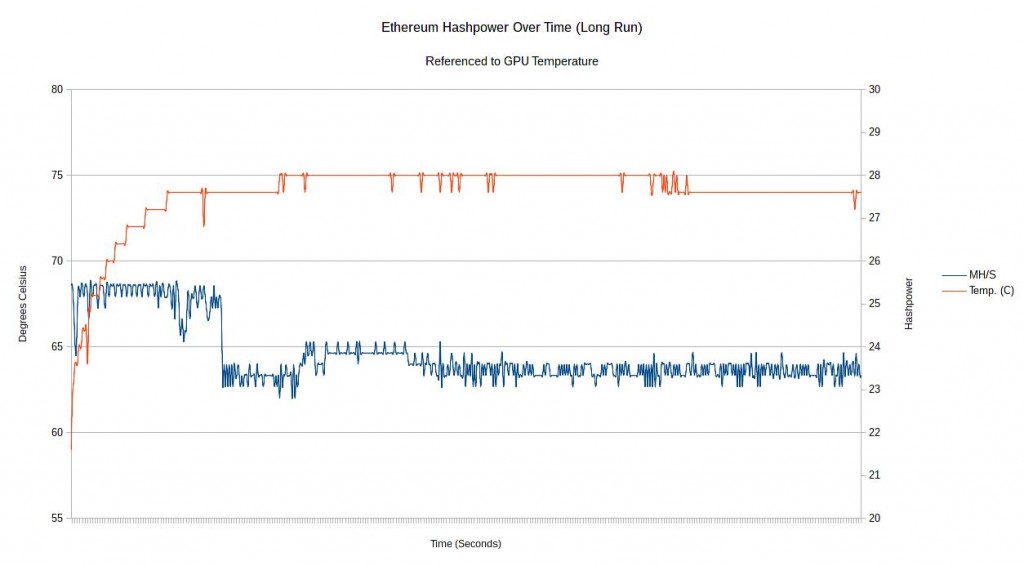 The thermal characteristics of EVGA’s ACX 3.0 Heatsink show promise, as the card hits a maximum of 75 degrees Celsius under a mining workload, a full 8 degrees under the thermal solution on the reference blower style card (granted, blower cards are almost universally worse for mining applications, as they are optimized for use in a small metal box.) We’re seeing some odd behavior with the card’s hashrate as it warms up, though: 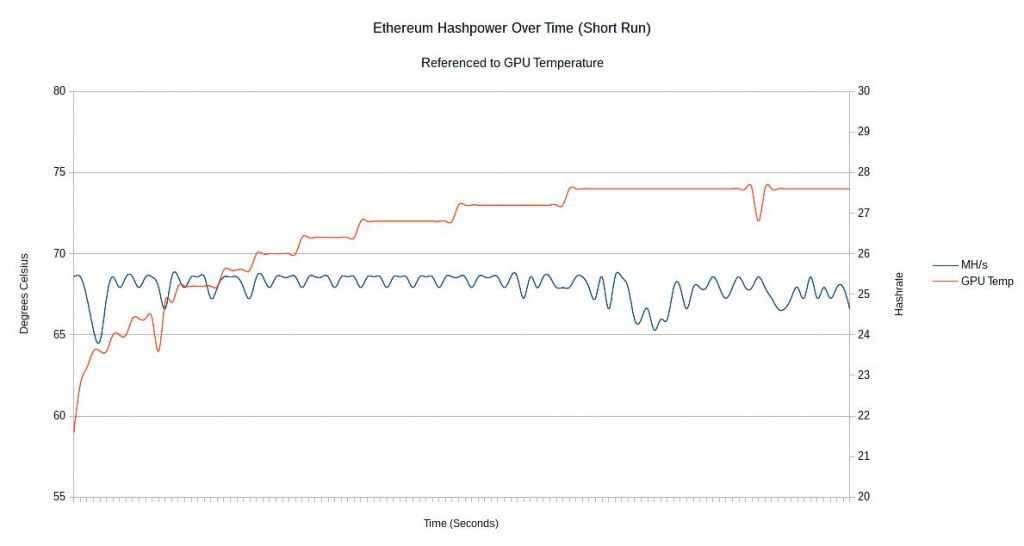 Here we see the card moving from a relatively stable range of 25.1-25.7 MH/s to destabilizing as it reaches 74 Degrees. About one minute more into the test and we plummet to an average of 23.1 MH/s as we approach 75 C. Obviously, this card is performance limited by its temperature far below the expected thermal limit. Given Ethereum’s Reliance on memory bandwidth, it’s interesting to note that with the identical GDDR5 chips on the 1070 and 8gb RX 480, they post similar performance levels despite compute and architectural differences.

So with our disappointing first run results, we decided to tweak the fan profile to be far more aggressive by enabling “Coolbits=28” in our configuration files. Note that overclocking and voltage control are not yet supported on 10 series cards in Linux, so Windows may indeed turn out to be a better option until drivers are updated. The Results are night and day: 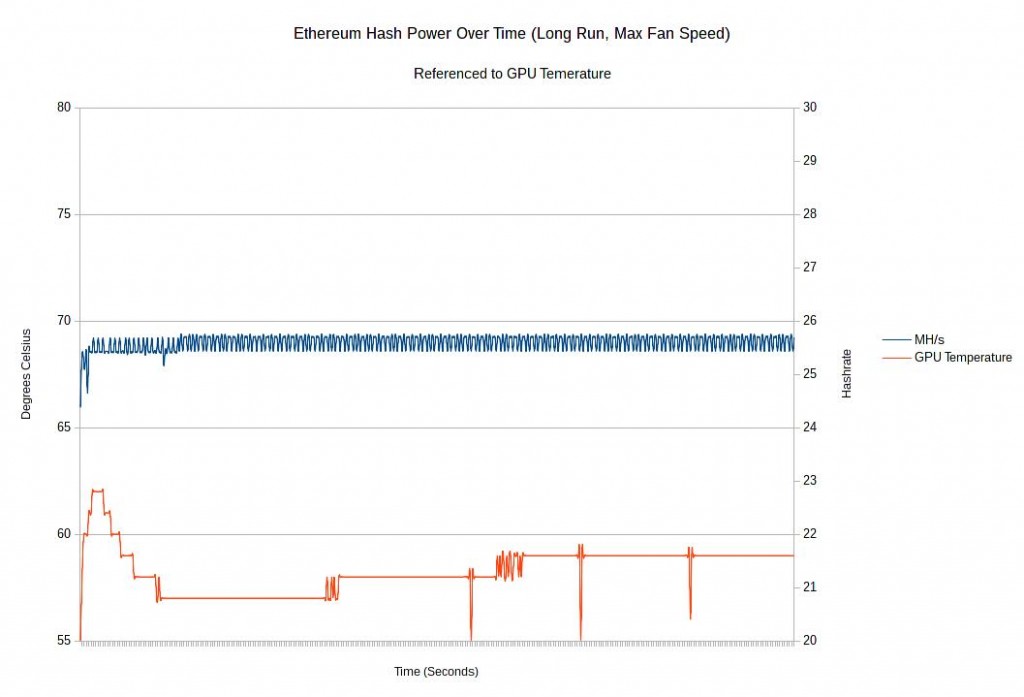 The fan profile kicks in at 63 C, and pushes it down past the regular idle temperature of 56 degrees in some places! More significant is the steady hashrate of 25.6 MH/s once we hit the temperature maximum of 59 C. This could possibly be pushed up even further when voltage and clock settings are added to the Nvidia blob later this year.

Pascal is going to be a beast to characterize moving forward, as each card in the lineup so far has had different bus widths, memory chips, and power characteristics coming off the line. However, the EVGA 1070 offers an attractive alternative to the current Mining Golden Boy, the RX 480. It offers nearly equal performance while drawing only 140 Watts under load, 13% less than the 480’s 159 W. While the MSRP of 380 USD has proven to be effectively false at this point, the superior thermal and power characteristics of the 1070 may be of interest to those looking to build a larger scale operation as the marginal energy savings add up. Here’s the per watt performance data from our earlier Radeon Overview Piece, with the 1070 thrown in for reference: 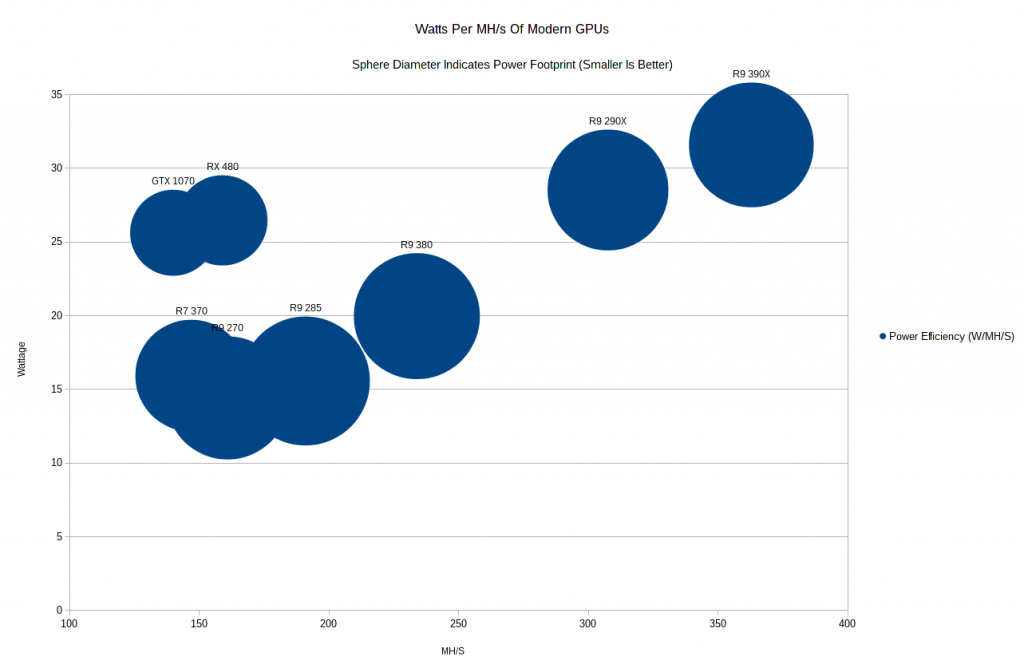 At stock settings the 1070 Wins out on efficiency at only 5.5 Watts per Megahash to the 480’s 6, and the ACX 3.0 Coolers on EVGA’s Products certainly helps solidify that lead over the RX 480’s reference cooler. So the Question of the practicality of this card, and indeed all 1070’s seems to come down to three main factors: mining operation scale, the cost of power in your area, and the availability and price of aftermarket 480s. Smaller operations and hobbyists: the 480 is still our firm recommendation. However, the 7-8% power savings hash-for-hash and the increased price of AMD products in many parts of the world make the EVGA 1070 a real contender at scale and abroad. I’d recommend this card over the reference blower design any day, as it comes in at the same price with a far better cooler. That in mind I’m still far more interested in cards closer to that phantom MSRP Nvidia Quoted to the public at launch, as well as the 1060, if it can hold its own with these two cards in the marketplace. If we do see a well-cooled 380$ 1070 hit the market, it’ll mean a lot for people setting up CUDA-based mining systems, and shift the power balance of mining as the big fish in the ecosystem retool.

Want to see more hardware reviews? Thoughts on our analysis? Leave them In the comments below!