For those of you who don’t have any daughters between the ages of 2 and 20, let me set the scene…

After her sister just accidentally cast a spell that turned the castle and surrounding area to ice, Anna set off to find Elsa and avoid a potentially disastrous witch hunt.

After trudging through the snow for a while and falling in a river, Anna was relieved to find a local trading post and hoped to find a fresh pair of boots or any other winter supplies the princess could get her hands on.

Now, though the story is quite obviously set in Norway, for some reason the shopkeeper is the only person in the entire movie who has an authentic Norwegian accent. On seeing Anna, the gentleman excitedly exclaims “big summer blowout” and proceeds to highlight the fact that he now has a “supply and demand problem” in the winter department.

My point here is that the blowout in the Italian bond market yesterday in a strange way reminded me of a Disney movie. It was out of place, awkward, and as unhelpful as it was unjustified. That doesn’t mean we can’t use the opportunity to find some great deals.

Please note: All data, figures & graphs are valid as of May 30th. All trading carries risk. Only risk capital you can afford to lose.

Even though it’s rather clear that the issues in Italy will remain Italian and that what’s happening there is expected to be a temporary political scuffle that is highly unlikely to spread, many traders used the opportunity to take some profits off the table and global indices ended red on Tuesday.

Though Asia had carried the sentiment from Wall Street, it looks like European investors this morning are buying the dip. The EURUSD is off the lows, as are the DAX and the Dow.

Though it’s still not clear if the canceled meeting with Kim and Trump on June 12th in Singapore will happen, what is clear is the trade war with China is apparently back on.

The US President is quite set on narrowing the trade gap between the world’s two largest economies and so has proposed an additional $50 billion worth of tariffs on imports from the production powerhouse country.

So far, many analysts seem to be shrugging this one off. With Donald Trump at the helm of the negotiation, it’s never really clear how this might progress over the next week or what concessions or exceptions might be made.

What people aren’t focusing on and probably should be, is the extension that Trump gave to Europe, Mexico, and Canada, which expire on June 1st… Friday.

The Canadian Prime Minister spoke on Bloomberg yesterday and explained how Canada has been disadvantaged by the fact that the US is their only customer for oil exports and how they plan to fix this. He also said regarding NAFTA that “no deal is better than a bad deal.”

Now, where have I heard that before?…

Anyway, where was I going with this… Just keep an eye out for any headlines regarding the trade war and any potential consequences.

Oh, and we have an interest rate decision from the Bank of Canada early in the American session so it could be a good opportunity to trade the Loony.

So this is quite possibly the most unscientific analysis I’ve seen in the crypto-market lately, and that’s saying a lot, but it’s not untrue. This graph posted on social media seems to plot the price of bitcoin against the cycles of the moon. 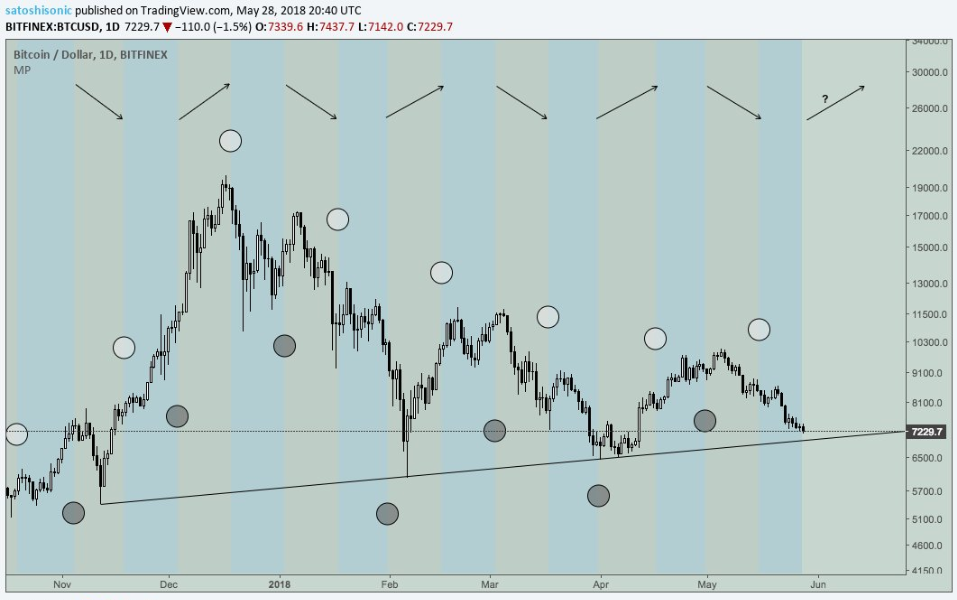 We have evidence that the moon influences many things including the tide of the ocean and possibly even human emotions. According to Wikipedia…

Indeed, a full moon was observed last night over Tokyo and Seoul, and here we can see its ostensible effect on the crypto market.

Of course, for mainstream adoption, we’ll need to look closer at the emerging markets and the actual economic situation on the ground in those places. Though it might not be far-fetched to draw a correlation between yesterday’s fall in the Euro and rise in bitcoin, that doesn’t necessarily imply causation.

Looking forward to an amazing summer!!