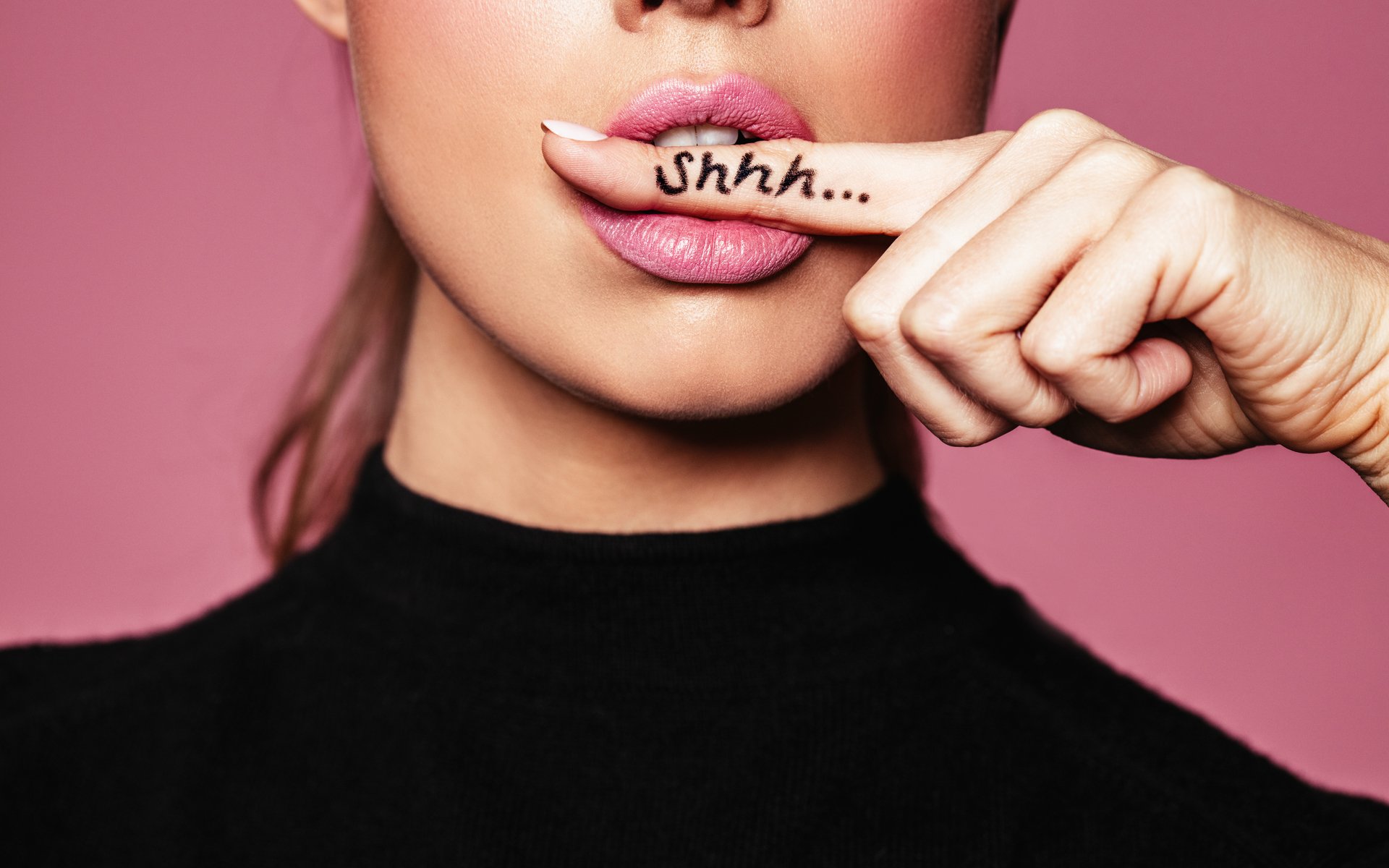 Altcoins continue to tease and play hard to get for the umpteenth week in a row and investors are wondering if alts will cast aside their prudishness and provide a little action.

Hurry up and wait seems to be the appropriate idiom for explaining how cryptocurrency zealots and investors feel right now. Most cryptocurrencies gravitate near pre-2017 bull run prices and the market is playing hard to get as charts show fat bottoms (no pun intended) and salacious cryptocurrency news continues to suggest that the market is all lubed up and ready for some action. 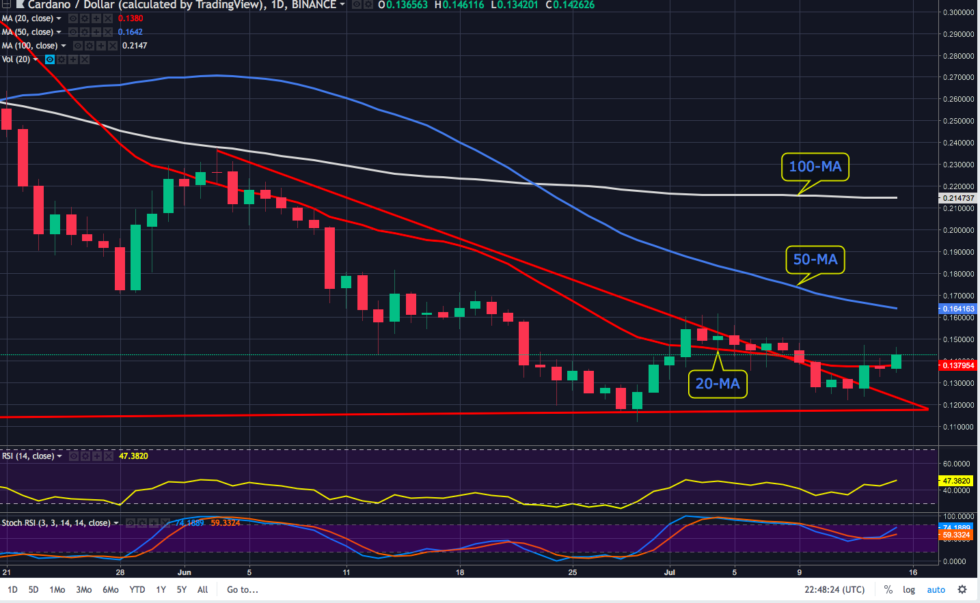 ADA [coin_price coin=”cardano”] seems to have benefited from the Coinbase rumor and broke through the descending channel but appears to be sliding backward as the hype surrounding a possible Coinbase listing fades.

Similar to other altcoins, ADA is near 2017 pre-bull lows but the 4-hour chart shows there is bullish pressure as the 20-day MA took a sharp turn on July 13th and looks to kiss the 50-day MA in the short term. 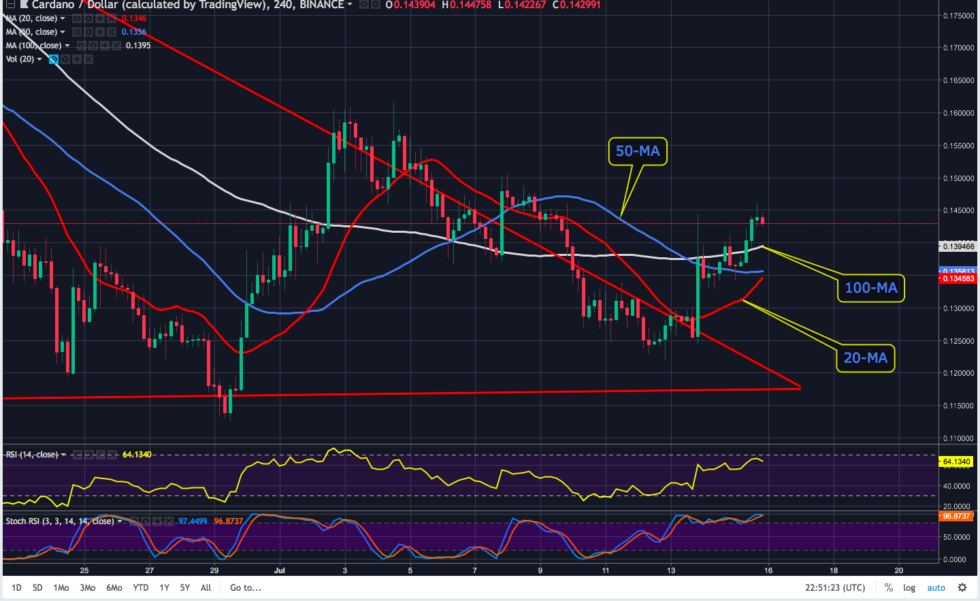 The 20, 50 and 100 MA are angled upward and at the time of writing the Stoch dances in overbought territory and the RSI remains bullish. One can see from the last candle that Cardano is on the indecisive precipice of either continuing forward or pulling back.

It’s likely that ADA will pullback as the Stoch and RSI overheat and sellers decide to pocket some profit but generally, the current technical outlook for Cardano is positive. 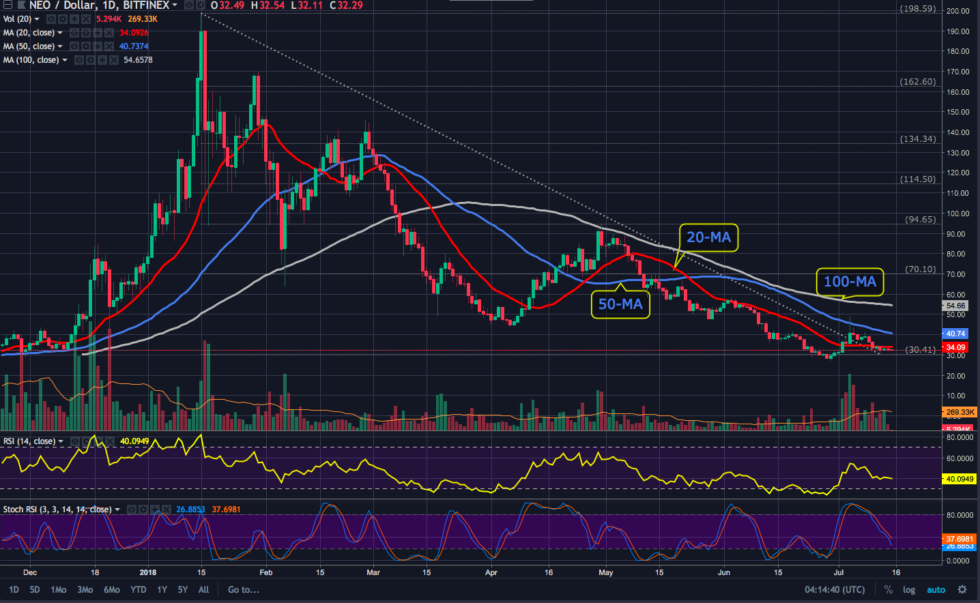 NEO [coin_price coin=”neo”] has completed a near 100% retrace according to the Fibonacci retracement tool and at the time of writing the 20 MA has begun to flatten, perhaps indicating some relief in bearish pressure.

NEO has possibly found a bottom as it now trades at prices near to the pre-December bull run prices. Generally, the outlook remains bearish as the 4-hour chart shows the 20-day MA below the 100 and 50 MA with the 50 sloping down and approaching a cross with the 100 MA. 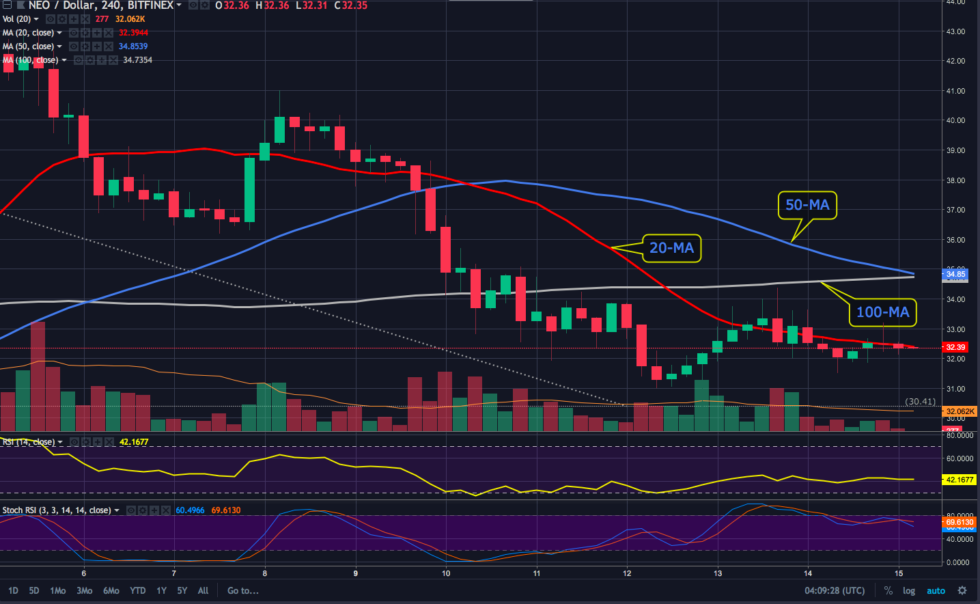 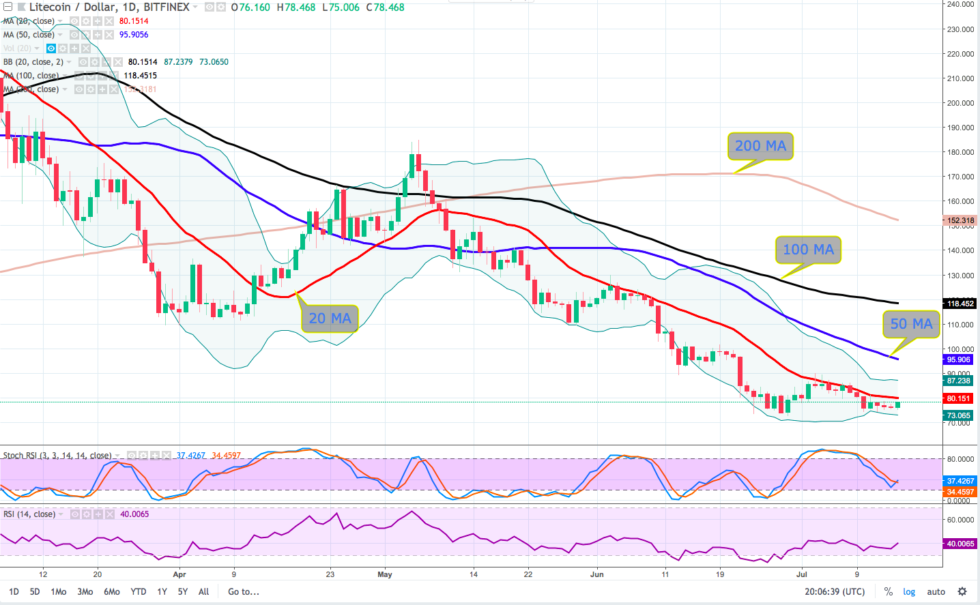 The Bollinger bands have spent the last few trading session constricting and the 4-hour chart shows what looks like the beginning of bullish expansion. While LTC [coin_price coin=”litecoin”] obviously isn’t going to the moon and seems relatively unaffected by recent news of a new partnership with TokenPay which has a 9% stake in Germany’s WEG Bank, a rewarding swing trade could be in order within the range of $74 through $80 to $85.

Like most alts, LTC is scraping the bottom near yearly lows and all iterations of the moving averages are tilted towards bears. At the time of writing the Stoch is lifting from bearish territory and the RSI also climbs towards 40. 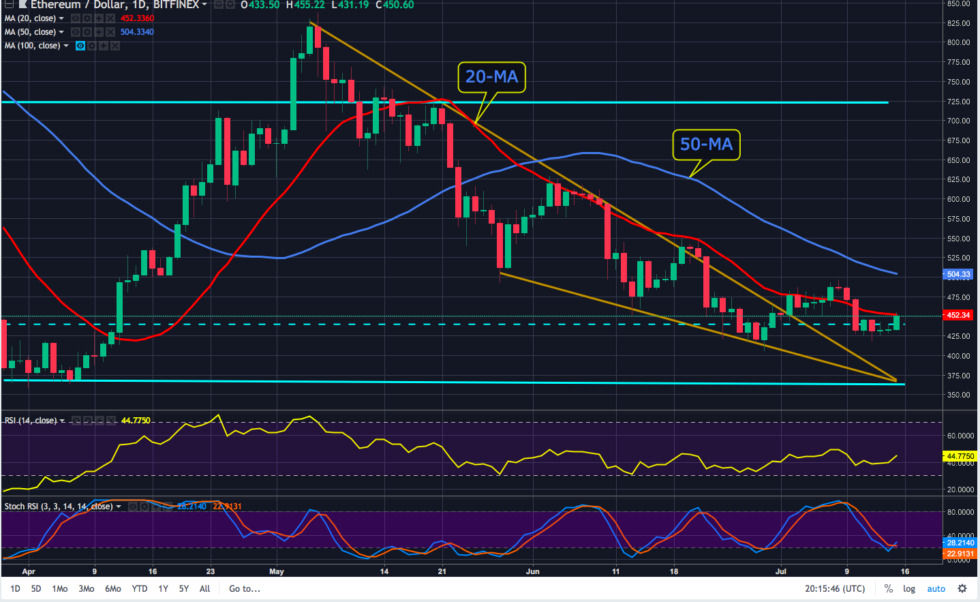 Not much has changed for ETH [coin_price coin=”ethereum”] since last week, except for the fact that it now trades outside of descending trendline. It continues to trade above April lows but also has struggled to punch above $500. At the time of writing, ETH is testing the 20-day MA at $452 and a breakout could lead ETH to retest the 50-day MA at $504.

At the time of writing, the RSI is inching towards bullish territory while the Stoch appears to be reversing from oversold conditions. Buyers could consider buying on strength when ETH has demonstrated an ability to sustain above $500 on the 4-hour chart. 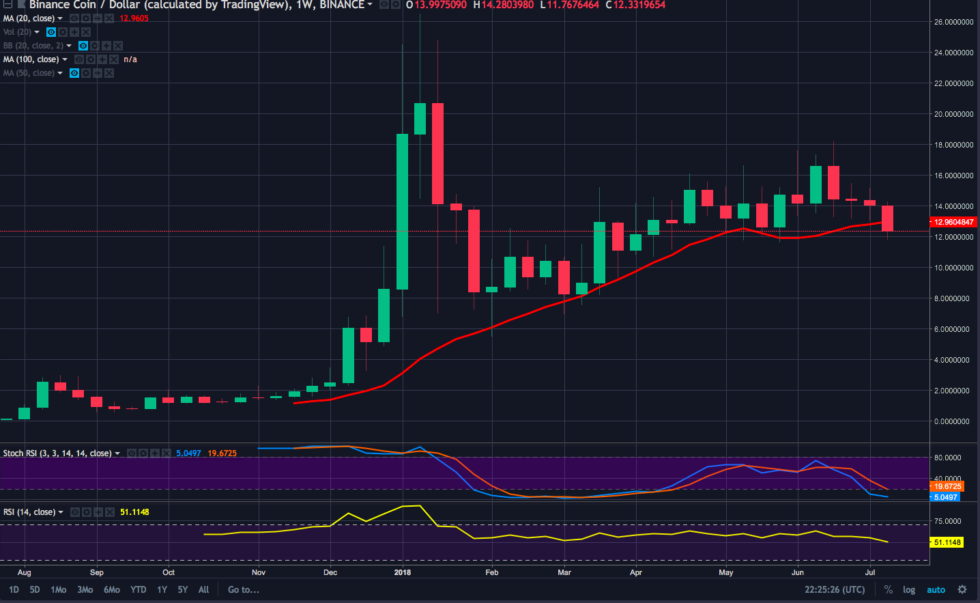 To date, BNB [coin_price coin=”binance-coin”] has been a top performer all throughout 2018 but at the moment it is trading at lows not seen since mid-May. The weekly chart shows BNB in steady ascent since mid-March and the current downturn threatens to break BNB out of is upward trajectory as it at risk of dropping below the 20-day MA. 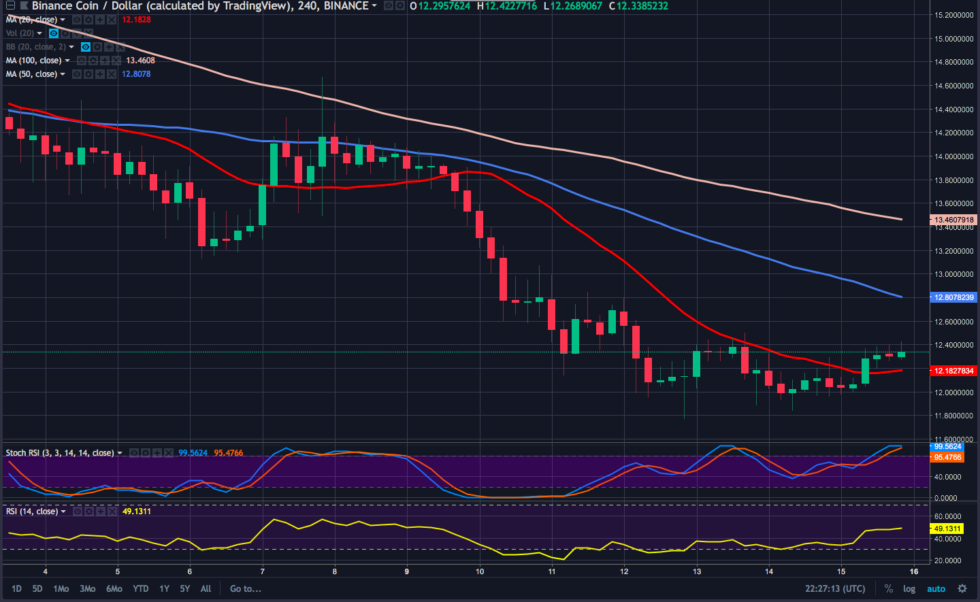 Meanwhile, the 4-hour chart shows attempting to recover as the cryptocurrency currently trades above the 20-day MA at $12.32 but the daily chart does show a pattern of lower highs and lower lows in play since the 8th of July.

In short, BNB tends to trade well during BTC [coin_price] decline and recovery so it is one to keep an eye on and the fact that it now trades at May lows is also somewhat exciting.

Where do you think altcoin prices will go this week? Let us know in the comments below!