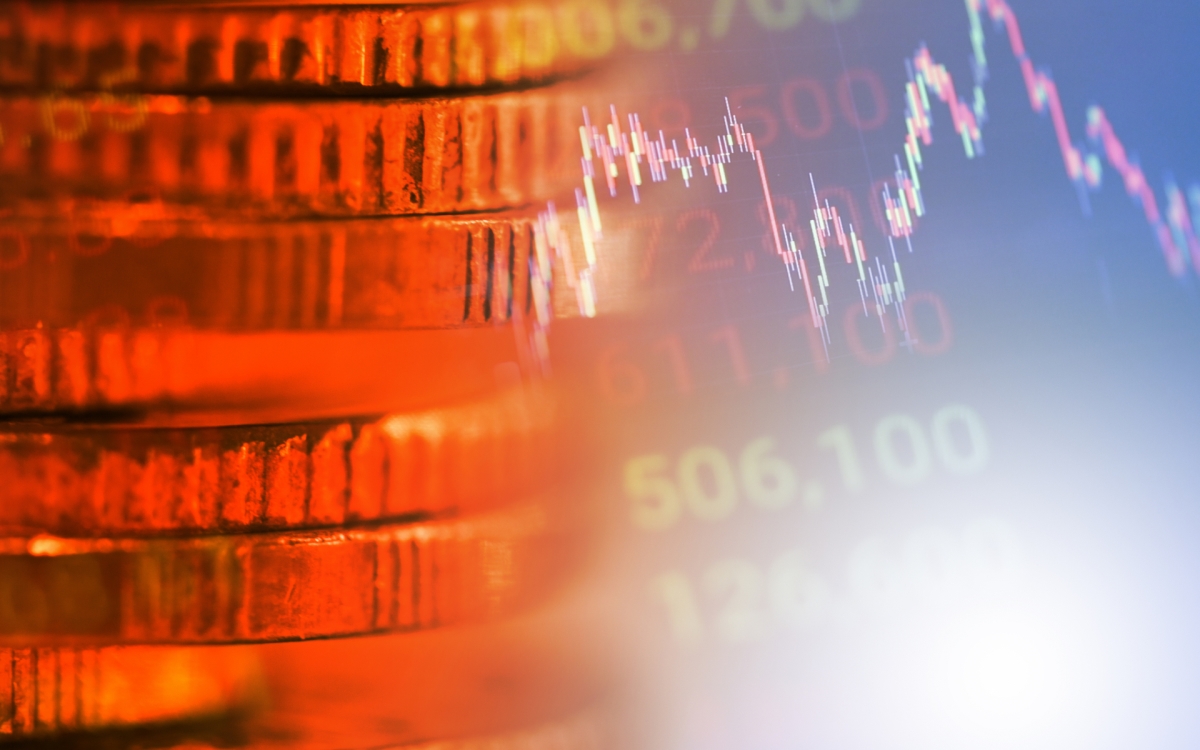 The total market capitalization of all cryptocurrencies has not only broken the $30 billion dollar mark for the first time ever, but is growing at an accelerating pace.

It looks like Coinmarketcap website will need a bigger chart as cryptocurrencies are now above the $30 billion dollar market capitalization line. This is indeed a big milestone for cryptocurrencies in general, which are now growing at the fastest pace in their history.

In retrospect, the first run-up in price was also impressive but turned out to be a bubble. It popped in late 2013 after quickly shooting up to about $15 billion. However, at the time, the only relevant cryptocurrency was Bitcoin, which comprised over 95% of the entire crypto market.

Since almost all Bitcoin trading was done on the doomed Mt.Gox exchange in those days, the shockwave swept through the entire cryptocurrency market, which would not see $15 billion again until late 2016. 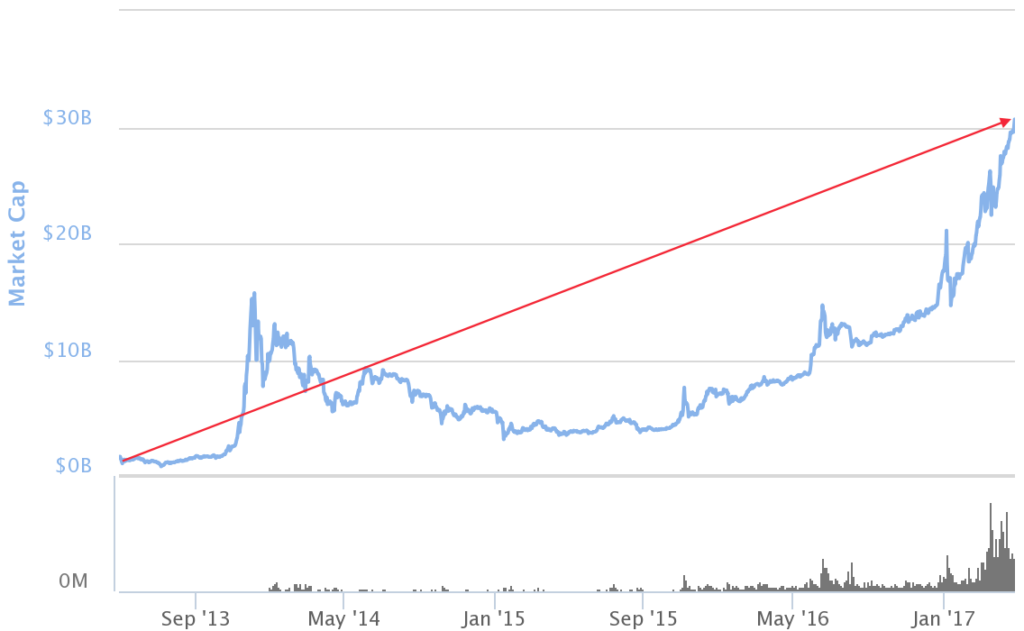 In other words, it took a total of three years for the crypto market to pare its losses after the first bubble burst. But it only took four months for it to double since the start of the year!

What a Difference 3 Years Makes

However, the market is now a lot different than it was in 2013. Today, it is not just Bitcoin hitting new highs as its market dominance index has fell to below 70%. Alternative cryptocurrencies or ‘altcoins’ are now also attracting a lot of new users and investors.

In fact, Bitcoin is not even the best performing cryptocurrency so far in 2017. Dash, Ethereum and Monero are the top three this year to date, surging 600%, 550% and almost 60%, respectively.

Of course, other cryptocurrencies are also emerging almost daily with their own pitches in an effort to attract users. While most will ultimately fail, the diversity should make the crypto market more stable as a whole. 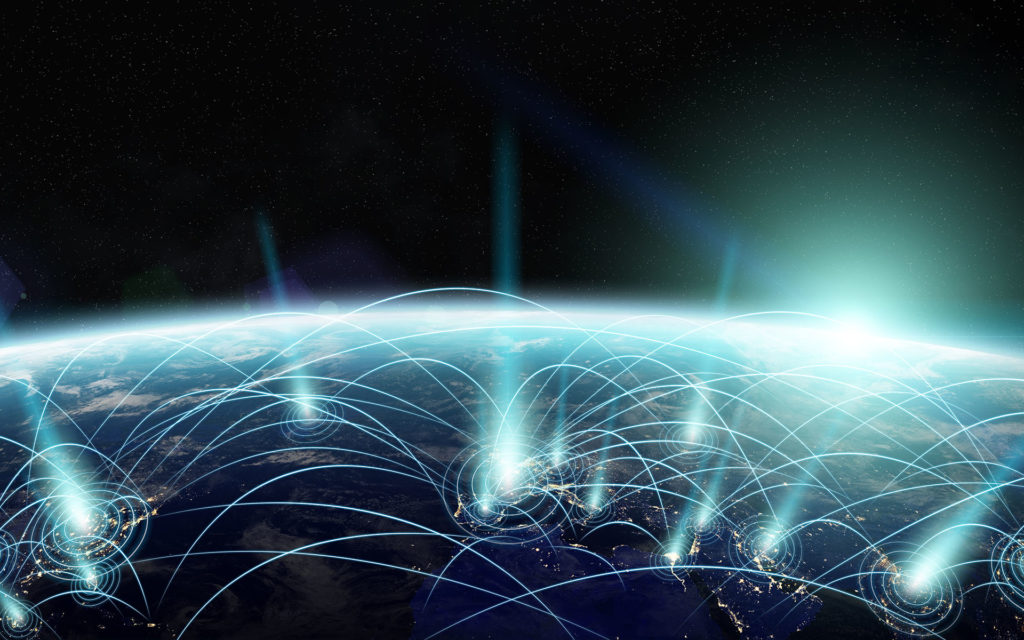 Not only are there more cryptocurrencies being traded today, but there are also more exchanges and other means for trading and safekeeping crypto assets. Simply put, if another Mt.Gox type disaster takes place, users are no longer reliant on a single entity.

Moreover, many have learned not to store all of their funds on an online exchange. As the adage goes: if you don’t control your private keys, it’s not your bitcoin.

In other words, the nascent cryptocurrency market has already spread itself thin enough as to mitigate systemic risk through decentralization.

Commenting on the milestone, Shapeshift CEO Erik Voorhees, predicts that the crypto market cap will hit $300 billion in the next four years.

Voorhees knows the market pretty well as someone whose in charge of an online service that converts between cryptos and handles millions of dollars in volume every day. But despite the recent rise of altcoins, he believes that they’re still used largely for speculation at this point.

In his view, Bitcoin is the one cryptocurrency right now that is not limited to speculation. Voorhees says,

[Bitcoin is] used to send hundreds of millions of dollars all over the world instead of expensive and slow and censored bank networks.

At the same time, the crypto market as whole is still in its infancy. It is attracting more and more capital. It is increasingly covered in the media — and not all in the negative light like in the early days. Banks are investing millions of dollars to study Bitcoin technology. Even traditional investors and governments are starting to see the potential.

Snapchat’s first investor, recently stated that Bitcoin could reach as high as $500,000 by 2030. Meanwhile, others are placing their bets on projects like Ethereum as new applications are being explored with each passing day.

At this rate, the next six-digit milestone for the cryptocurrency market is not a question of if, but when.

When will the cryptocurrency market hit six-digits? Let us know in the comments below!