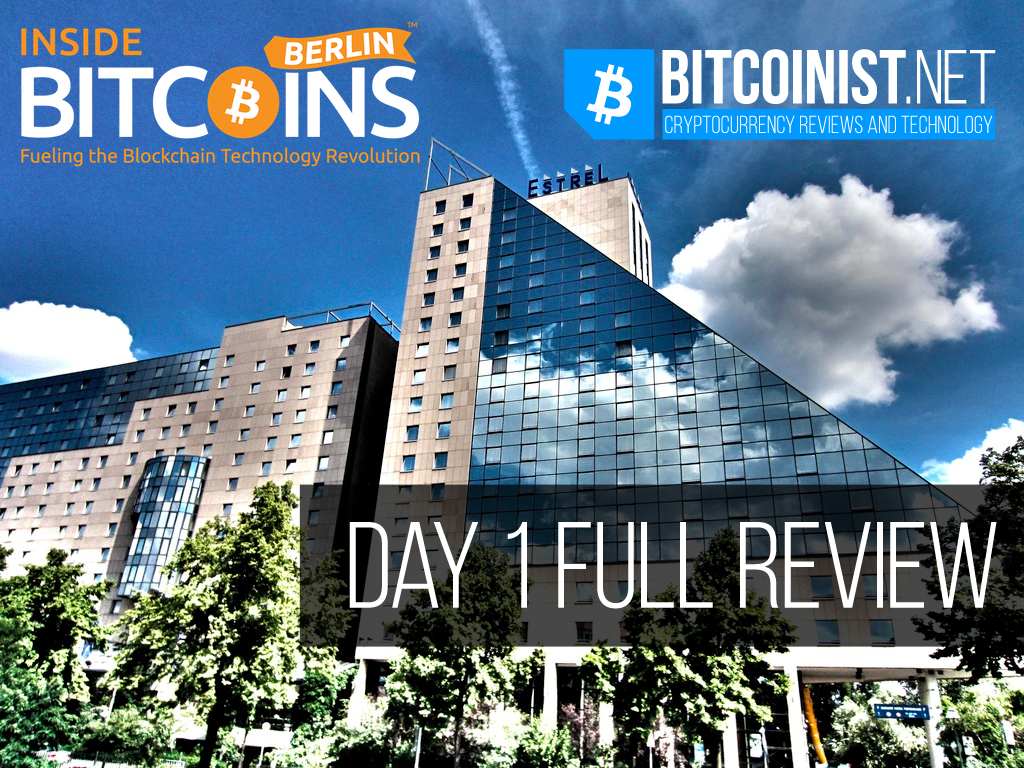 Day One Summary of Inside Bitcoins Berlin

Editor’s note: We have edited this article to fix a mistake in our reporting. Previously, we said that Aaron Koenig made the popular Bitcoin documentary, “The Rise and Rise of Bitcoin.” We have changed that statement to say that he contributed to the film’s production.

When we arrived at the conference this morning, we were not sure how many people that would be attending. Initially, we thought that many people might not be able to find the time to come to the conference, since it was being held on a Thursday. Nevertheless, at the beginning of the opening keynote, the gorgeous meeting room was filled up. 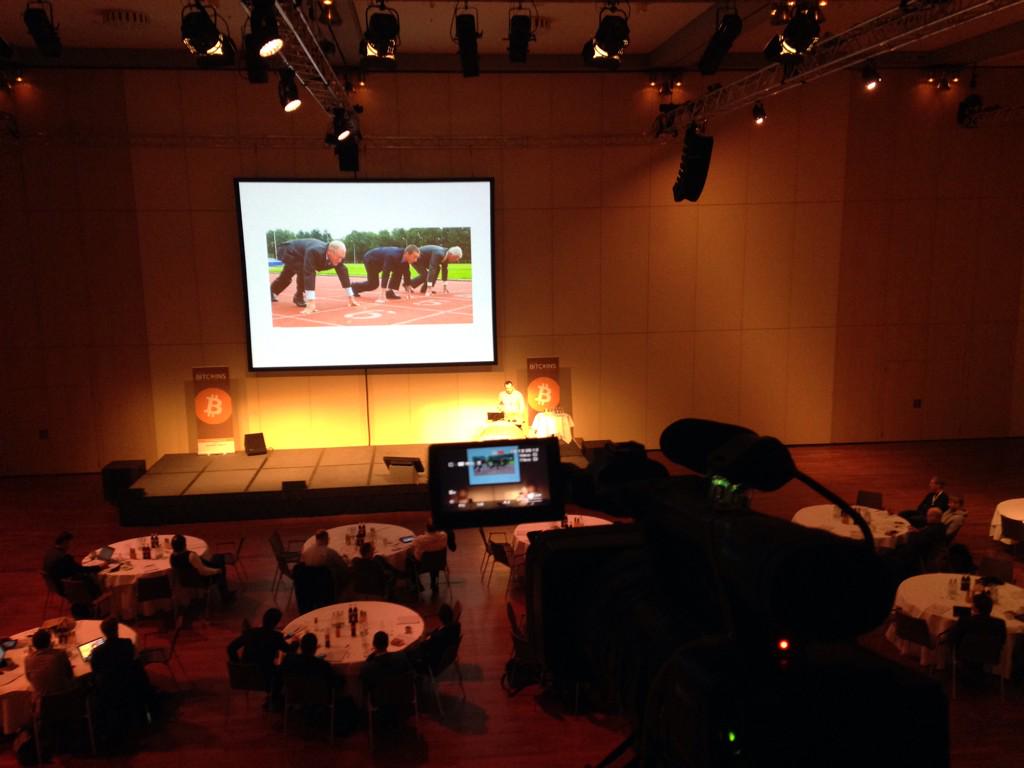 Chris Odom, the co-founder and CTO of Monetas, kicked off the Inside Bitcoins conference with his keynote, “A Practical Distribution of Risk.” He talked about the current state of Bitcoin, the problems it faces, and his company, Monetas, hopes to solve these problems.

According to Odom, one of the main problems Bitcoin has is how people have assumed that Bitcoin is trustless without examining the claim with with a critical and professional attitude. Monetas is creating an off-chain protection and security service to solidify the trustless nature of Bitcoin.

The Blockchain and The Future of Money

The next speaker was Flavien Charlon, founder of Coinprism and Preditious. He explained the uses of colored coins and how they incorporated into the Coinsprism network. You can use colored coins for a whole variety of different things. For example, if you want to build up a business and are looking for some much-needed funding, you can create a colored coin for your business. However, colored coins are much more than just funding. They also allow the creator of the coin to give out voting abilities to the “investors”.

“Regardless of what people’s opinions may be, colored coins do have a lot to offer and create a kind of versatility that may not be found with another crypto that is currently available” said Mr. Charlon.

After Charlon’s speech, Ferdinando M. Ametrano took the stage. He is the founder of Hayek Money Project and the Quantlib Project. He talked about the current developments that have occurred in the Bitcoin world in recent years. All aspects of the Bitcoin economy, including merchant adoption, wallet downloads, technological innovation, and even the bitcoin price show progress.

However, everything can be improved upon, and Ametrano raised some issues that he believed needed to be addressed. He also picked on on some of the previous speaker’s observations, like security and versatility. “ We need to stop and focus on the speculative aspect of the price of Bitcoin. The community is only 5 years old, and we show a exponential growth in every aspect. This also includes the price, which is rising on the global scale,” Mr. Ametrano told the visitors at Inside Bitcoins Berlin.

Everyone is praising the blockchain technology. Peter Kirby, president of Factom, explained to conference-goers where the praise comes from. The blockchain has real benefits for companies because it creates openness and offers pseudonymous options for data that companies want to publish.
This will reduce the possibility of fraud because everything, visible to the public or private, is stored on the blockchain or blockchain-like storage mediums ( both offline and online).

The Sound Wallet is an interesting concept, although it sounds a bit strange when hearing about it for the first time. The principle idea behind Sound Wallet  is that you encrypt your wallet with sound. Thus, if criminals break into your home and steal your PC or laptop,  they won’t be able to get into your wallet because you encrypted it with a certain sound.

Sound Wallet only works with vinyl and wav files; MP3 will not work with the wallet. The wallet merges analog and digital in a unique way. It will probably get a lot more attention because it improves on the security.

Jeremy Gardner, the founder of the College Cryptocurrency Network and spokesperson of Augur, was slated to speak after the lunch break. As usual, Gardner made astute observations and sometimes hard-hitting critiques concerning Bitcoin. “Educations and collaboration with governments are the current highlights, which makes sense if we want Bitcoin to play with the big boys or have some relevant role in the world. Working against or antagonizing established banks or governments will not help Bitcoin at all,” Gardner told us.

Panel on the Pros and Cons of Bitcoin Investing

It was quite interesting to hear the six people that were on this panel. Most of them agreed on the fact that bitcoin price volatility is an everyday risk we all take when we decide to invest in bitcoin. Some of the speakers argued that the bitcoin price drops because of a combination of several aspects, such as bitcoin mining profitability and speculation.

The fantastic six also imparted some great wisdom, like not focusing too much on price. Things like operational risk, catastrophic risk, and compliance risk are also a couple of aspects that are more important than just focusing in on the price.

We Feel a Movie Coming on: Satoshi’s Last Will

Aaron Koenig, our friendly bowler hat-wearing friend, is going to create a new Bitcoin movie that is called “The Last Will of Satoshi.” You might have heard of Koenig before, as contributed to the popular Bitcoin documentary, “The Rise and Rise of Bitcoin.”

“The Last Will of Satoshi” is a science-fiction thriller about Bitcoin, which will be recorded in Argentina. There is actually a possibility for you to be in the movie, if you are willing to pay around 100 BTC.

Fraud is in the news all the time. Bitcoin and credit cards are frequently used in the same sentence when news outlets report on instances of fraud. In response to this problem, Nimrod Lehavi, founder and CEO of Simplex and board member if the Israeli Bitcoin Association, created a service for credit cards. This service, Simplex, will reduce the risk of fraud because it verifies all transactions. If a transaction isn’t verified, it will be rejected. On average, about 25 % of the current credit card actions are being rejected. Of those 25% about 80% are actually fraud.

Mr. Stanislav Wolf, VP  of product development for Yacuna AG, asked the question: who needs Bitcoin Exchanges? In the bitcoin economy, exchanges pose a love-hate relationship with bitcoin users relation. We don’t need them in the long-run, but right now we can’t live without them. The fact that exchanges aren’t regulated and that many governments see them as fraudulent or criminal can generate problems for exchange customers. Therefore, government regulation would give a sense of legitimacy to bitcoin exchanges. However, regulations aren’t the only things that can be implemented to improve exchanges; other systems can help them become more secure as well.

For example, using multi-gateway service-to-asset exchanges allows extra protection. P2P trading, though, is even better than these types of exchanges. With servics like Counterparty and Ethereum are leading the charge in creating decentralized alternatives to regular bitcoin exchanges.

The last presentation of the day was left to Jacob Hansen, CEO and Co-Founder of Crowdcurity. Hansen discussed the implementation of the blockchain, as well as its intrinsic value. According to Hansen, the blockchain may be the missing link to revolutionizing the transfer of money and value.

What do you think about our coverage of Inside Bitcoins Berlin? Let us know in the comments below!