DMarket is the first cross-game marketplace that allows gamers from all over the world to trade or exchange in-game goods originating from any gaming platform. Their ICO, launched on August 17, 2017, has raised over $7 million in its first 24 hours.

The Birth of the Game Asset Marketplace

The world first saw it on a large scale when Team Fortress 2 released the item market in 2008. Thousands upon thousands of dollars were being poured into in-game keys to open in-game locked crates and receive items that did nothing but change the appearance of characters and weapons.

They had no real world intrinsic value but for $2.49 players could receive a random item that more often than not would be worth pennies. Occasionally players would get something worth more – some of the rarest items in the game could be worth upwards of thousands of dollars – but regardless, they still were just in-game cosmetics.

Game developers quickly realized that releasing games with virtual items not only increased the popularity of the game but also provided them with a secondary revenue source. As a result, more and more games started popping up that used the in-game asset concept.

Of course, as soon as the value of these items was realized, people immediately sought to trade items. And along with the rise of trading, came the rise of marketplaces for these items. 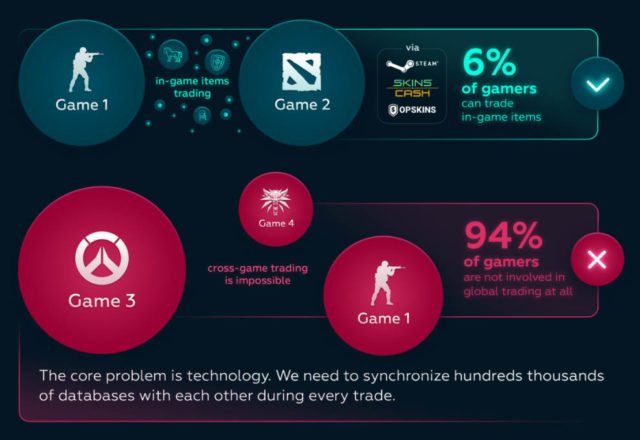 Game development company Valve introduced Steam in 2003, and later released the Steam Community Market. Coincidentally, the first game it supported was Team Fortress 2. It allowed users to sell their in-game items for Steam Wallet money, which in turn could be used to buy games off of Steam or other in-game items for sale on the market.

While gamers were thrilled to have a marketplace for their in-game items, they weren’t loving the serious fees that came along with selling items. For any sale on the marketplace, there is a 5% “Steam Fee” that goes straight into Valve’s pocket. There is a game fee, usually 10%, that goes into to the developer of whatever game the item is from.

That’s where DMarket comes in. They create a decentralized marketplace in which these items can be sold for DMarket tokens; an asset that can be traded for other items in the marketplace. It can allow for trading of items across games, truly opening global trading. While most games are not connected in any way, DMarket changes all that.

Now, any game that has developers interested can link to the market with an easy to use API. Using a blockchain-based system along with smart contracts to allow for one-click trading and exchange. The contracts connect the game universe to the market without any need for third-party trust. With major games coming into the market, a multi-million-dollar market could be created instantly. 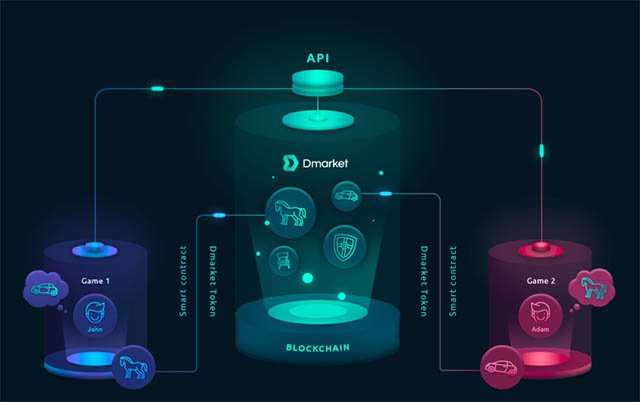 4A Games
4A Games is known for their immersive first person shooters such as Metro: Last Light and Metro 2033. They have two new games slated for release soon: Arktika.1 and Metro Exodus. With an expected 2018 release date, Metro Exodus is part of the TOP25 list of upcoming games next year.

Tatem Games
Tatum Games develop unique and versatile games for the mobile gaming market. Some of their more popular titles include Carnivores, Vivisector, Cryostasis, and Tulula: Legend of Volcano.

The Talent Behind DMarket

The DMarket team boasts some extraordinary talent in both blockchain development and video game industries.

Founder and CEO Volodymyr Panchenko and Co-founder Alexander Kokhanovskyy bring over two decades of video game industry experience to the table between the two of them.

Volodymyr Panchenko is the founder of skins.cash, the second largest virtual items marketplace online. In the past year, over 12 million items were sold through skins.cash. Panchenko is also the number one private merchant of digital video games in the world, having sold over 15 million games during the past 5 years via eBay, G2A, and Kinguin.

Alexander Kokhanovskyy has over 17 years of experience in the eSports industry. In addition to being the founder of Na ‘Vi, one of the most successful eSports teams, he is also a shareholder of ESforce Holdings, the third largest eSports entity funded by USM Group.

Andriy Khavryuchenko is DMarket’s blockchain architect. In addition to 26 years of software development experience, 4 of which were cryptocurrency-specific, Khavryuchenko was also one of the senior developers behind DASH.

Buyers who get in early will be rewarded with bonus tokens. The bonus ranges from 10% on Day 1 to 3% on Day 3.

Prices and token distribution cap have yet to be announced for stage two of the token sale, which will run through the month of November.The release of the alpha version of DMarket, as well as an accompanying testnet, is set to be released in October.

DMarket tokens will be available on exchanges once both stages of the token sale are complete.

Are you a casual or hardcore gamer? How will DMarket improve and enhance your gaming experience? Let us know in the comments below.