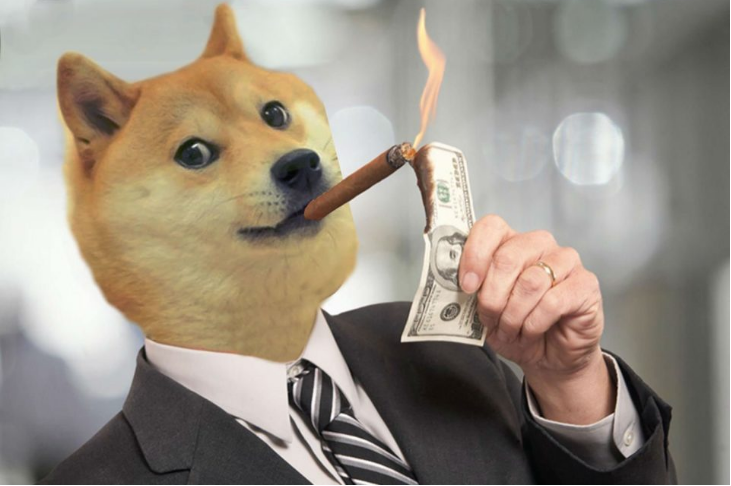 Dogecoin Smokes Coinbase By $2 Billion In Market Cap – No Longer A ‘Silly’ Joke?

by Christian Encila
in Coinbase, Dogecoin
0

As Coinbase CEO Brian Armstrong bared plans on Monday to outline an actionable framework for achieving regulatory clarity in the cryptocurrency space, something came up that might require some of his attention: his crypto exchange has just been overtaken in the market value department by a token most people see as a joke.

Don't wait! Jump on this Crypto Deal and get a 150% Welcome Bonus plus 100 Free Spins on your deposit today!
Related Reading: Crypto Crisis: Binance Loses UK Adviser As Scrutiny Over Exchange’s Finances Grows

As of this writing, DOGE is trading at $0.074608, down 18% in the last seven days. But the price decline shouldn’t matter much, as the coin now sits on the No. 8 spot in the ranking of the world’s top crypto, with a market cap of $10.24 billion, data from Coingecko show. In comparison, Coinbase Global has a market valuation of about $8 billion. So, that’s a little more than $2 billion in difference between the exchange and the joke coin, Bloomberg reported.

In a report by Bloomberg, it says that Dogecoin’s value has risen to almost $9 billion, and the exchange’s market cap is now at $8 billion.

Coinbase is trailing behind meme crypto Dogecoin in terms of market value https://t.co/RCe3ZDCp1t

The Joke’s On Who Now?

Jacob Sansbury, chief executive officer at online trading platform Pluto, has this to say about the contrast in market cap:

“I don’t think there’s a tremendous amount of substance to be gleaned from the fact that Dogecoin has surpassed Coinbase in terms of market capitalization – except to say that the crypto market is very much in flux right now.”

Sansbury adde that: “It’s in such flux that good projects are down bad while sillier ones are doing relatively well.”

Although the disparity does not directly determine the underlying value of either project, it may demonstrate how a crypto asset that few take seriously can outperform the shares of the largest public digital-asset exchange in the United States.

Coinbase now has a lower market capitalization than Dogecoin lol

Dogecoin has gained popularity on social media because of its Shiba Inu dog emblem and the backing of numerous celebrities. Support from prominent personalities, like Elon Musk, is one of the most significant reasons for the success of the coin.

Since the billionaire CEO of Tesla acquired Twitter in October, Dogecoin’s value has risen significantly, but it has fallen alongside other top cryptocurrencies owing to the collapse of FTX.

Coinbase has been one of the hardest-hit crypto companies as investors pulled out their assets from exchanges in the face of a continuing crypto winter. This year, the exchange has sacked roughly 1,200 employees.

According to Chief Financial Officer Aleecia Haas, Coinbase will have a “more conservative bias” in 2023.

In light of the recent DOGE price volatility, it is clear that the cryptocurrency market is highly unstable and that the value of any individual digital asset can vary greatly over time.

“Dogecoin has no real connection to the macro, but instead is driven almost fundamentally by headlines and hype,” Michael Safai, partner at crypto trading firm Dexterity Capital, said.