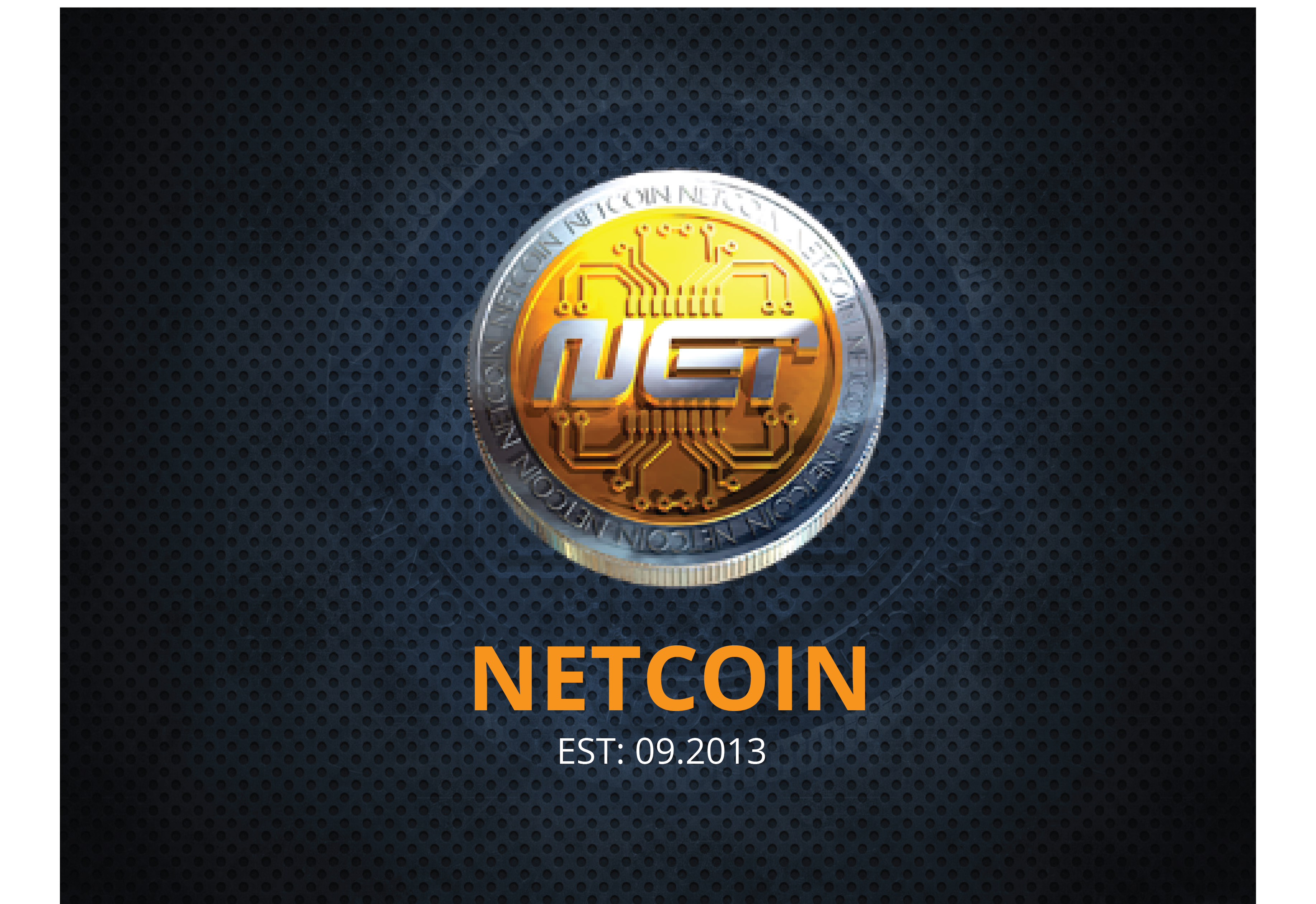 While Netcoin is a quiet altcoin, many things have been developing in the background. With the release of PIR and OWI, not only did it receive a lot of attention from traders, but its market price grew dramatically, showing an increasing demand for Netcoin. I talked to Bryan (SnappySnap), the Director of Team Management regarding Netcoin and its decision to add POS.

What is the main goal of Netcoin?
That’s an interesting question, particularly since people often associate “Netcoin” and other altcurrencies within this medium that people think will replace or work in tandem with fiat currencies. Netcoin…is not “just” a coin. It’s always been more than that, and that’s reflected in it’s goal.

It’s main goal…is to give back to the community and to be accessible by all. Netcoin is a long term vision and plan for the future. Yes, it’s based on blockchain technology but it’s gone beyond a ledger and transaction record.

It’s taken “coin” and made it a purpose and vision to help. That’s the goal of Netcoin and the Netcoin Foundation.

Can you tell me a little bit about the Netcoin Foundation?
Sure thing! The Netcoin Foundation was established in December of 2013, to bring more organization to the coin development, to promote the use of Netcoin for the benefit of both ordinary users and merchants worldwide. As a nonpolitical online currency, Netcoin is backed exclusively by code. This means that—ultimately—it is only as good as its software design.

By funding the Netcoin infrastructure, including a core development team, we helped to make Netcoin more respected, trusted and useful to people worldwide. Protecting Netcoin’s Cryptography is the key to Netcoin’s success. It’s the reason that no one can double spend, counterfeit or steal Netcoins.

If Netcoin is to be a viable currency for both current users and future adopters, we need to maintain, improve and legally protect the integrity of the protocol. Additionally, if Netcoin is to be more than a currency, it’s foundation has to be secure. By ensuring its security, the foundation (and community) is then able to build upon the code..using Netcoin…for greater purposes.

Another of the foundation’s roles is to promote Netcoin, in the context of public misunderstandings, misinterpretations and misrepresentations,Netcoin needs to be clearer about its purpose and technology. Allowing the community to speak through a single source will enable Netcoin to improve its reputation.

What is and what are your plans with NETUCATE?
This is a great question. Like many endeavors, we have our plans and dreams, but the possibilities for this project truly are limitless. Our dream is to have an e-learning platform, that rewards people for bettering themselves and others.Free resources, to assist educators and students all across the globe. Students will be able to learn, grow and earn as they go, gaining themselves much needed funding for equipment.

Do you have any other Netcoin related projects in the future?
We do! Some of them we can’t talk about at the moment (they are still too fresh to really mention..partially because we’re so focused on getting

NETUCATE up and running), but a few of the ones we have in the pipeline:

Wallet Updates: We have some new features to make using a wallet more end-userfriendly.We will be releasing a customizable skin feature for your wallet.

Poker: We have some DEVS working on an online poker site (multiplayer) using Netcoins as the poker chips!

Why did Netcoin decide to add POS to POW?
This was a decision based on several factors:

The addition of POS (Proof of Stake) was a tough call to make but after much discussion and communication with the community we felt it wasa step in the right direction for Netcoin and crypto in general.

The benefits of POS are a more secure and faster Network, it makes a 51% attack far less likely as any would be attacker would need to gain control of both algorithms to take over the chain. It also adds an easy entry point for people to participate in mining.

There are no complicated and power hungry devices needed, you simply send some coins to your wallet and wait. Most if not anyone can do that, the samecan’t be said for setting up a mining rig.

However, with the increase in number of “alt coins”, copies, pump and dumps, etc … Netcoin needed to do something special to demonstrate it is not a simple copy of the hundreds of other POS and POW cloned coins out there.

We wanted to give the community a truly unique coin, and that required some trulyunique coding and algorithms. So that’s where we decided to add PIR and OWI, we had to do things differently.

A lot of coins have fixed, static interest rates. Some have minimum thresholds (you must posses X amount before you are eligible to earn rewards) Some have sliding scales based on your amount of people staking.

One of the biggest downfalls against POS (and POS reward) is this:

There is nothing stopping you from holding your coins offline and gaining your rewards while never helping to secure the network. For instance you could…

That’s not very “fair” to those members who are actively staking and participating in the network. Why should anyone bother trying to compete and leave their wallet running if they’ll get the 5 years reward anyway?

While POS might be technically capable of securing the network, it could do more to encourage the behaviour required of the wallet holders to secure the network effectively. Thus, we wanted a system that would:

Can you explain what OWI and PIR is?
PIR (Personal Investment Rate) is very simple, the more you stake (hold coins in your wallet) the higher the percentage reward you will receive! To our knowledge there is no other coin offering this today. Why did we do it? 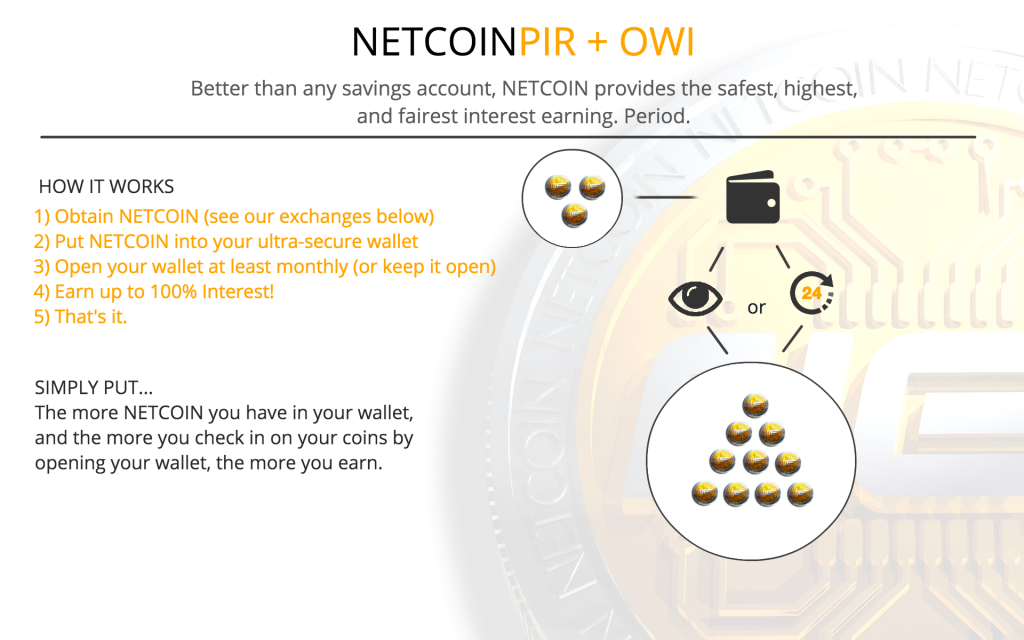 PIR is a way to encourage adoption and increase individuals to buy and use more Netcoins because PIR makes it always beneficial to own and hold more, It is also a way to reward the people that take the greater risks (greater “risk” = obtaining more netcoin), because we all know how volatile cryptocurrencies can be at the moment.

So the more Netcoin you have, the greater the risk you take (because you/we don’t know where the value will go), we believe you should be rewarded for that and PIR helps to mitigate that risk. 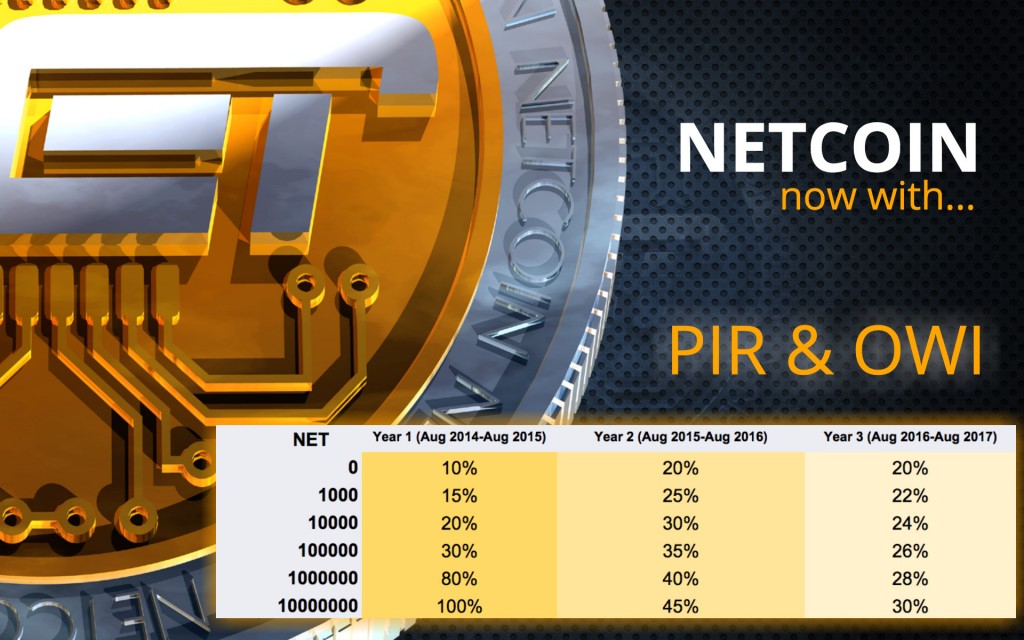 However as Netcoin grows and ages the risks should reduce and the value should begin to stabilize. So to factor this in we closed the gap between the lower end and higher end rewards over the next 3 years. For example currently in year one the yearly rates are from 10% 100%, Year 2 has 20% 45%and year 3 20% 30%.

This also helps to encourage early adoption and mitigate inflation, there is never a better time to obtain some Netcoins than right now.

OWI (Open Wallet Incentive) is a method to encourage users to keep their wallets open and securing the NETwork. All you need to do is hit a stake block at least once every 30 days. After 30 days the yearly percent rate begins to decline a small amount every day with a half life of 90 days.

How will it affect the way people stake Netcoin compared to other POS coins?
It gives a whole new perspective to being a supporter and member of the community. Netcoin is more than just a means to “get rich quick” or flash in the pan project. It’s been designed for the long term.

With that, the POS implementation was designed to truly give back and well, reward the community to actively supporting the netcoin network…both in terms of the coins they obtain, and their willingness to keep the wallets open and staking.

Netcoin definitely created a way to both incorporate POS while keeping itself unique from all of the other cryptocurrencies. Netcoin has plenty of features to come in the future, all of which will come in due time. Thanks for your time Bryan!