Now, we must first know that Goalcoin is pretty much like any other coin concerning the algorithm and the fact that it’s fully PoW. Goalcoin runs on the scrypt algorithm using DigiShield and it’s fully PoW. Therefore, it can be mined indefinitely. Also, it has a max number of 2.3 million coins, and after this amount is mined, the block reward will change to .03 goalcoins.  Goalcoin is currently in it’s IPO phase which is offering about 46,000 coins. After seeing what the coin was about, I must say I intrigued as I do like watching the World Cup and soccer as a whole. I approached the developer and he was kind enough to have an interview with me. So, without further ado, the interview:

Q:Why did you want to create goalcoin?

We are a group of professionals specialized in the area of graphic design, open source software development, social media marketing and trading, we are also football lovers and Bitcoim enthusiasts.Our team recently observed that the football industry is generating $ 18 billion a year and has an annual growth of 18%. What we observed, linked to the premise that Bitcoin is revolutionizing the financial world and needs more publicity and provision of services to become mainstream, gave us the idea of ​​a currency that can provide sports services, that encourage the economic growth of the soccer industry while allowing increase the user base that use digital currencies as payment method

Q: Why create a coin with a focus in the world cup?

The World Cup is the biggest sporting event. Our currency is focused on sports services and we believe that the best way to catapult our project success is to focus initially on providing services for this event that completely captures the attention of the whole world. Also consider the World Cup Brazil 2014 as an excellent opportunity to advertise GoalCoin and Bitcoin at venues where matches will take place. In these venues will be gathered people around the world still do not have knowledge about digital currencies, we want to make ourselves known among these people to bring new users to Bitcoin and GoalCoin communities

Q: Are there any plans on what you will do to promote the coin in the world cup?

Yes, we will travel in June to Brazil to promote the currency in the venues where the most important matches are going to take place. There will make a giveaway to promote currency among soccer fans. We will distribute one card per person, which contains 4 coins that can be used in digital services that we will offer on the GoalCoin website and in nearby commercial establishments that we are contacting to accept GoalCoin as payment method

Q: Who composes the goalcoin team?

Our team has cultural diversity, we have 5 members from as far away as Venezuela and Singapore. We have 3 software developers, 1 designer and 1 person specialized in trading and social media marketing. We also have partners in Brazil, Spain and USA

Q: Would you create a gambling website for the world cup? Gambling in each game I mean

Yes, we already have a tournament at worldcup.goalco.in that allows betting on results of full competition. Beyond this we will soon provide a new feature to perform daily bets on the matches of World Cup to allow greater flexibility and diversity in the competition

Q: Why have an IPO for the coin?

We need a financial base to carry out projects to come, especially the realization of the advertising campaign in Brazil and provide GoalCoin accept as payment in sports shops  The BTC collected from the pre-sale will go towards funding the Goalcoin team to conduct several operations, namely: 1. Acquire merchants to accept Goalcoins as payment for World Cup merchandise 2. Physical distribution of Goalcoins at the World Cup stadiums in Brazil 3. Marketing Goalcoin to both cryptocurrency adopters and non- adopters

Q: Is there any way to reassure investors of the IPO. Can we be sure it won’t be a scam?

Yes, we have implemented an trusted escrow on bitcointalk to conduct the Pre-Release Sale as transparent as possible to investors. Also we have a number of services already in operation that serve as proof of our good work. I want mentioning that we have placed a cap of BTC to invest to ensure a fair price for each coin and to raise through the pre-release sale only the amount of btc that we need to cover the cost of our projects 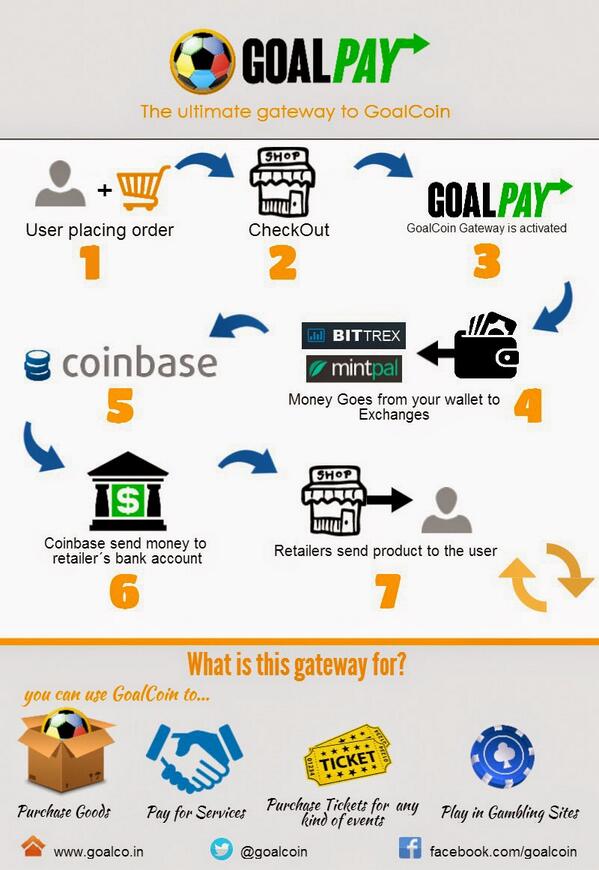 Scrypt was chosen because we want to provide the most secure technological platform for GoalCoin. We conducted a test of  different currencies algorithms and we concluded that the more secure algorithm is Scrypt with Digishield, developed By the DigiByte team

Q: Why go full PoW instead of PoS? Would PoS be a possibility?

Currently, it is possible to develop an android wallet only in those currencies which are full PoW. To develop an android wallet containing PoS as generation method is required a lot of changes and testing at the source code. To achieve the objectives of the GoalCoin project, you need a wallet for android available for the currency to be accepted as a payment in commercial establishments. This has led us to develop a full PoW currency, however, in the future, we do not rule adding PoS and even Proof of Transaction block generation method, developed by Fluttercoin team, since we consider them methods to strengthen even more the blockchain security.

Q: Are there any merchants going to accept goalcoin as of now?

To date, we have reached agreements with 2 exchange, one based in Brazil, and we are in way of reaching agreements with 2 exchange more in the coming days. We have also had conversations with shops near Curitiba, Brazil venue, to accept GoalCoin as payment method when giveaway takes place in World Cup Venues. Our team is also developing an online sports store to purchase quality products and we have plans to convert worldcup.goalco.in into a comprehensive platform for sports betting with GoalCoin and Bitcoin

Q: Why should people invest in such a coin?

Because it is a currency linked to 2 financial branches that are growing today, such as the football industry and bitcoin, which is also linked to a team of professionals that has ambitious projects in process of development to catapult the currency to success. Unlike other new coins that are currently advertising the World Cup, we have our eyes beyond this event and we want to bring GoalCoin to club competitions, Champions League and other major tournaments

Now, I wont tell anyone to invest in a coin with an IPO. Track record for coins with IPO’s aren’t that great in any case. However, I do like what goalcoin offers. It will be involved in one of the biggest industries we see today in sports. They have plans on what it is they want to do, and seem to have a firm grasp on what they want to achieve. Read through the interview, check out the announcement thread, and make an informed decision. Even if you don’t invest in the IPO, this coin could be good to mine or buy in the near future. I see a bright future for the coin if it delivers on what it promises. It’s a waiting game now.