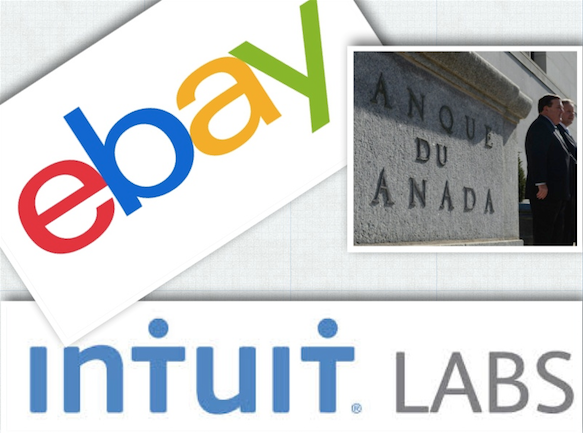 News summery, read through it….

Bitcoin, considered by many to be the killer of traditional payment methods such as PayPal, may become instead an enhancement. CEO of eBay, John Donahoe, states that they are actively considering the integration of Bitcoin with their payment service known as PayPal. Last month, they even launched a virtual currency section on their US website so it’s fitting that there considering it as a payment method. This is a mean virtual transactions are limited to the U.S. however. You’re still able to list and add in the classified section, the transaction, such as these would be outside of eBay’s influence.

Intuit labs, a company known most famously for their tax software, have recently publicized a lab experiment is geared toward small businesses and accepting Bitcoin. They call it “QuickBooks Bitcoin payments” and it allows small businesses to start accepting payments in Bitcoin. Your main selling point that entices small businesses is it’s not required for the business to have a Bitcoin wallet, or even see Bitcoins. This takes it a step further than other payment processors, such as Bitpay or Coinbase. Intuit believes that many small businesses find “trusting a third-party Bitcoin wallet provider can be scary”. There is also a risk of price volatility, which Intuit promises to take care of all on top of less transaction fees and never having to worry about chargebacks.

After the recent hiring of some very controversial people to the Bitcoin foundation and subsequently the resignation of members, Olivier Janssens has put up $100,000 bounty (in Bitcoin of course) for a “software platform that can replace the Bitcoin Foundation”. According to the Reddit post, under the handle of anarchystar, full of your states that “we are an Internet community, don’t need public figures decide what’s good for us. We need to stop politicking and start focusing on the project directly”. The post has gained much positive attention from Bitcoin enthusiasts and developers alike.

Bank of Canada being tough on Bitcoin

The Bank of Canada has come out with a very bold statement, stating that Bitcoin adopted could destabilize global finance. Bank of Canada extends even further than that, including all other digital currencies in spectrum, such as Facebook credits, Amazon coins, and World of Warcraft gold just to name a few. Bank of Canada wasn’t all hate however, acknowledging the potential benefits of faster transaction times, less fees, etc. they do feel that in Bitcoins current stance, Bitcoin entering the mainstream would be a dangerous move. This hasn’t stop Canadian Bitcoin enthusiasts, with their continued push for mainstream adoption, whether that’s in the form of Bitcoin ATMs or getting Bitcoin accepted at your favorite coffee shop.