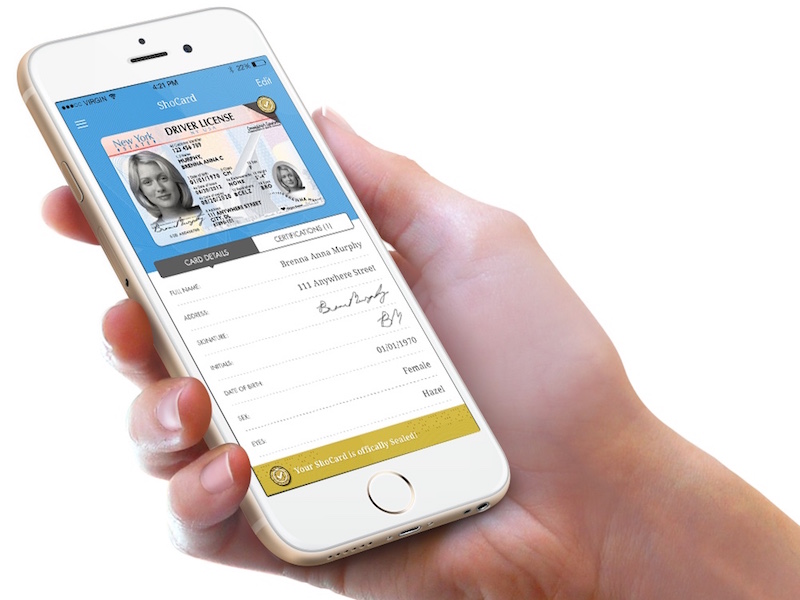 ShoCard Embeds Your Identity in the Bitcoin Blockchain

New startup ShoCard is building a digital identity system that encrypts and embeds sensitive information onto the bitcoin blockchain, removing the risk of a third party losing that data. The company is still in its early stages, but founders say they’re already in talks with financial institutions to start implementing ShoCard as verification for online purchases.

ShoCard was presented this week at the TechCrunch Disrupt conference in New York, where co-founders Armin Ebrahimi and Jeff Weitzman explained the concept to an audience of technologists and potential investors.

They touted the ShoCard application as a solution to the cumbersome identity verification often used by banks, credit card processors, and other entities that process sensitive information through the internet.

Despite these lengthy and expensive efforts, the insecure nature of credit cards and bank accounts led to identity theft that was responsible for over $27 billion in losses during 2012 alone.

“Identity has always been a problem on the internet,” Weitzman said. “Creating a relationship between a real person and their online activities is an enormous and costly challenge.”

Indeed, many websites that manage sensitive information require users to verify their identity through complex and sometimes confusing methods. Multiple choice questions like “Which street have you lived on before?” and “Which phone number is associated with you?” are commonplace during these security checks.

ShoCard could streamline that process by taking personal questions out of the equation, and by using a cheaper infrastructure based on the bitcoin blockchain. The result would be a major cutback in the $27 billion of losses caused by identity theft each year, and reduced headaches for businesses and customers alike.

ShoCard’s core innovation is the way it handles the storage of identity credentials. Rather than the company acting as a trusted third party, ShoCard depends on decentralized blockchain technology to store the information in a trustless manner. A user’s sensitive information is distributed across nodes in the bitcoin network instead of sitting on a server.

Although the bitcoin blockchain is inherently public and transparent, the information stored within it — like ShoCard identities — are kept private by enterprise-grade encryption. Users keep their private keys safe on their own smartphones or computers, and they have a public key that can be used by services to verify their ID using ShoCard.

The company founders were careful to stress that ShoCard is an application built on top of the blockchain, and not on top of cryptocurrency itself. The distinction is important for many in the finance industry who are wary of bitcoin’s volatility and regulatory issues. Matt Turck, managing director of venture capital firm FirstMark Capital, asked the ShoCard founders if the blockchain infrastructure was “mature enough” to build a security system on.

“Absolutely,” Ebrahimi replied definitively. He went on to clarify a distinction between bitcoin, the currency, and its underlying technology:

This perspective ignores the fact that bitcoin, the currency, is essential for the blockchain to work as intended. The only reason miners secure the global transaction ledger in the first place is because they are rewarded with bitcoin currency as income. This provides a financial incentive to maintain the network and results in the decentralized blockchain that entrepreneurs have become so fond of.

But don’t tell that to Wall Street. In order for institutional firms to warm up to cryptocurrency — at least according to businessmen like Ebrahimi and Weitzman — the narrative must shift away from bitcoin as a form of money, and toward the blockchain as an innovative platform for applications.

“We don’t use bitcoin. We use the blockchain,” Ebrahimi went on. “Bitcoin is one instance of the blockchain, but we’re really focused on the technology.”

It’s true that ShoCard doesn’t deal with the bitcoin currency at all. The app doesn’t cost any bitcoin to use, nor does it transact in the cryptocurrency behind the scenes. The cryptographic blockchain is simply used as a secure database for stashing sensitive identity credentials. For ShoCard, that may be all that’s necessary to create a competitive product.

“Our application literally uses [the blockchain] so that we can keep all the [personally identifiable information] on the phone, on the mobile device that belongs to the user,” Ebrahimi explained, “and ultimately take ourselves out of being a trusted party that has to keep anything.”

Can the blockchain act as a secure method of storing personal identity information? Let us know what you think in the comments below!