The Evolution of the Bitcoin Icon – A CSC Story

Almost every cryptocurrency hobbyist is familiar with the Bitcoin icon. The giant “B” with two vertical lines sitting on a coin adorned with digital circuits emblazons much of the “crypto-sphere.” The history of the evolution of that icon is almost as colorful as the Bitcoin story itself. It is the culmination of collaborative design efforts that complement the core philosophy of Bitcoin and the cryptocurrency revolution at large.

Satoshi Nakamoto, the unknown Bitcoin creator, released the cryptocurrency’s white paper in 2008 with its launch in 2009. For the next three years, Bitcoin had no universally recognizable icon. While there were logos, particularly those designed by Satoshi as well as the ones designed by early Bitcoin aficionados, BTC didn’t have anything remotely representing a physical representation – even if it was only an image.

All of this changed when the American Open Currency Standard (AOCS) in collaboration with Mick (aka MJB), a gifted artist created the Bitcoin icon. 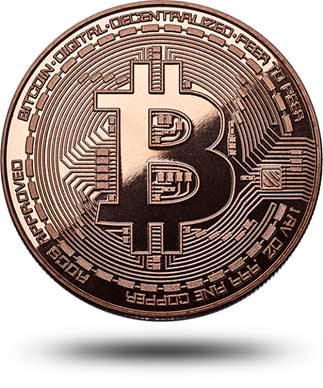 The Figures Behind the Bitcoin Icon

In 2010, an artist named Mick approached AOCS with an interesting idea to create the first solid Bitcoin. At the time, the AOCS wasn’t yet sold on crypto. However, it soon became apparent that the fiat-resistance movement and the libertarian ideals of the emerging cryptocurrency ecosystem had a lot in common.

The AOCS has since 2007 been invested in expediting the use of commodity-based money, assisting currency issuers with their brand identity needs and creating a thriving merchant economy where such “open currencies” can be used. The AOCS eventually decided to work with Mick.

Mick’s original design paid homage to the formative years of computer technology. The circuitry looks clunky much like the way circuit boards of by-gone eras looked like. The front of the coin was embossed with “MJB Monetary Metals.” The back of the coin bore “AOCS Approved.”

Cold Storage Coins (CSC) is the de facto cryptocurrency arm of the AOCS. As part of the launching of the 2018 Bitcoin Cold Storage Coin, CSC decided to get Mick to create some updates to the original Bitcoin coin.

CSC aims to bring a degree of reality to a world that tends to be overly virtual. The coins produced by CSC are essentially cold wallets compete with a unique wallet ID and a tamper-proof laser-etched private key. The coins are made from investment-grade silver, copper, and gold, guaranteeing superior quality and aesthetic appeal.

Would you like to own one of these cold storage coins? Please let us know what you think in the comment section below.