Bitcoin generates all of its yearly performance gains within just ten days. Miss those 10 days and your average is 25% down annually since 2013. Today was one of those days. But are there more to come? Let’s take a look.

As Bitcoin skyrocketed into the weekend, Tom Lee from Fundstrat was on hand with an interesting statistic. Namely, that Bitcoin generally generates all of its performance within just ten days. Miss those 10 days and your average is 25% down annually since 2013.

Well That Puts A Bit Of A Downer On Things

Does it? It’s a great (in terms of interesting, not ‘yay!’) statistic, but what does it actually mean? And how would you calculate a figure like that?

Luckily, Lee included a useful diagram with his tweet. 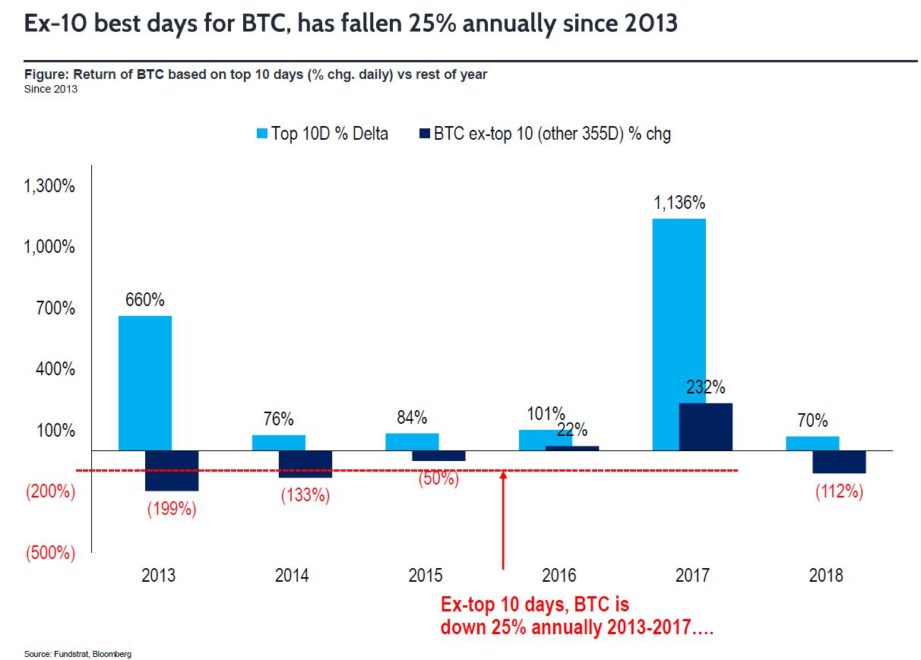 Right, so let’s see what we’ve got here. Top ten days percentage change, added together, so we have the overall percentage gains over the 10 best performing days. Well, that makes sense; so on 2017’s best ten days, on average the price more than doubled (113.6% gain).

But what about the rest of the days? Surely it would make sense to do the same thing, and simply add up the percentage change per day?

But let’s say we had two days, one with a 50% gain and one with a 50% drop. By adding the percentage changes we would get zero percent net change. But in actual fact, the price would be only 75% of its original value.

So, I Haven’t Missed All The Pump This Year Yet?

Only time will tell. This statistic doesn’t actually make any predictions about that and is of limited use for the longer term.

For those who dip in and out of bitcoin this may be of concern as timing the market is rather difficult.

However, this leads to Lee’s suggested tactic to ensure those 10 best performing days aren’t missed. HODL for the other 355 days.

This week’s strong move on #crypto and especially #bitcoin is reminder $BTC historically generates its annual performance in 10 days. Miss those 10 days and average return is -25%.

So HODLers have nothing to fear, and for day traders… the choice of 10 days seems fairly arbitrary. And past performance is no guarantee of future results. Especially since some past performance will certainly never repeat and will forever be reserved for the earliest adopters.

Lee also celebrated the fact that BTC price [coin_price] has moved above its 200 day moving average as a positive sign. This is what’s known as a golden cross and is considered to be a very positive sign. The last time this happened, it marked the bottom of the previous bear market.

Other indicators have also flashed bullish in recent months, forcing many bearish traders to change their tune.

Moreover, Bitcoin performs significantly better when the price is above the 200MA, with a win ratio of 80% vs 36% when below.

This suggests that we may have several more big days on the way.

Is hodling actually proving to be the best investment strategy for Bitcoin? Share your thoughts below!