Could you tell Bitcoinist about how the negotiations started for this venture?

We’ve met Marco back in June at Inside Bitcoin Hong Kong. We have supplier / customer relationships, and we’ve explored the possibility to work together in various businesses. The cloud mining partnerships is our first venture together. I expect more to come. 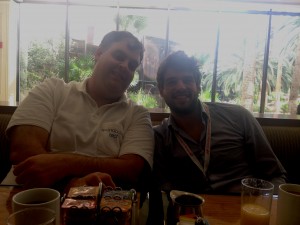 How many MW of power are you initially building out?

It’s not working like that. We’ve decided not to pre-mine, but send hardware to fulfil the contracts after the sale.
Read more here: Spondoolies partnership with Genesis Mining

This contract setup is a big deal as many of the companies that do sell cloud hash rate mine with their leftover power that puts them in direct competition with their customers for mining rewards. Guy and Marco have struck a simple deal that will allow them to not do that and provide power for their customers. We cannot help but to wonder if this will be the testing ground of their new chip tech will allow for contracts to be locked directly to the chips and hash rate provided for further transparency. The tech for this is getting closer.

Guy you have been reluctant to cloud mine and do not condone self-mining. How difficult was the decision to go into cloud mining and what changed your mind and had you do this?

At the moment, we still don’t self-mine. We brought a small amount of hash-rate online, composed of machines we’ve fixed after RMAs,, etc.. I don’t have a problem with the concept of cloud mining. I do have a problem with fraud and ponzies. I judge Genesis Mining to be 100% legit. They’re the most trustable cloud mining provider, and I’m proud of this partnership.

Marco you and Guy, mentioned you would be providing the back-end and interface. What things can we expect to see from you and in the interface?

It’s very similar to Genesis Mining interface, just without the Alt coins.
The hash-rate is backed by Spondoolies-Tech hardware and we currently don’t have alt offering.
You can check it out, it’s online.

The Challenges of Low BTC Value and Mining.

What challenges do you see currently in cloud mining especially with such low BTC value?

Guy Corem: Like the rest industry, you need the most efficient hardware with the lowest possible maintenance fees.

Marco Streng: For a cloud mining provider it is most important to offer miners the best
hardware together with the most efficient infrastructure. Our system to
guarantee a 100% uptime due to automized compensation as well as our optimized
mining facilities are only two of a lot of other advantages our users enjoy.

Guy and Marco you are both very much about being transparent and open. What steps are you taking to help customers know they are getting exactly what they are buying?

Marco Streng: We are very pleased to offer this unique opportunity to the cryptocurrency community. Efficiency is the most important element in mining, and when the most efficient infrastructure meets the most efficient hardware it enables you to remain in the market while others drop out giving their rewards to those who continue. We are grateful to be in the position to offer this service while competitors are forced to cease their operations. We look forward to a positive and successful relationship together.

When do you expect to begin sales?

We already did a soft launch. The loud launch is with you Scott. :)

Will pricing be all inclusive or will you be charging fees?

We’re charging the same fees as Genesis Mining is charging since ultimately, they’ll host the hardware.

I think that it’s a great partnership by the two most respectable brands in the industry.

The addition of Spondoolies-Tech to the cloud mining ecosystem is going to be a good thing. Many people are sick of scams and lack of transparency, and that is one thing Guy and Marco are working to bring to the industry. The new site is up and running with signups live. As Guy of Spondoolies said, they will only spin up the miners as they are sold as opposed to competing with their customers. We will test their service and let you know our thoughts on it in the near future.

What do you think about Spondoolies-Tech move into cloud mining?