Gemini expands, bitcoin and banks go head to head, and stealing RSA keys is easier than you might think. Want to catch up on the latest digital currency news? Take a look at the stories below.

Also read: Industry Report: Is Security in the Finance Sector Too Weak?

“We are thrilled to announce the expansion of Gemini services to the Great White North! This is just the beginning of Gemini’s international expansion and our tireless pursuit of building a world-class digital asset exchange with global reach. As of today, registered customers in Canada can trade bitcoin and ether on Gemini’s ETH/BTC order book… We’re excited to bring our friends to the North aboard the Gemini spaceship for our journey, and we look forward to expanding to additional areas of operations in the near future.”

Twin brother Tyler has also hinted that the company will be introducing itself in another foreign territory very soon, though the country has not yet been named.

Bitcoin was invented to give people financial freedom and independence from the traditional banking sector, but now it appears that banks are getting in on the digital currency trend and giving bitcoin a run for its money.

According to one source:

“Banks are developing new global payment systems based on the Ethereum blockchain’s technology… Bitcoin may also face competition from digital currencies issued by banks in addition to competition from Ethereum.”

How do you like that? Bitcoin being manipulated and thwarted by the very barricades it was built to overcome. It appears, however, that the blockchain still has a few tricks up its sleeve. Blockchain technology has been the subject of scrutiny among several world governments, many of whom now recognize it as not only safe but revolutionary in its abilities to store data. The current sentiment is that while bitcoin may eventually come to an end, the blockchain is likely to flourish. 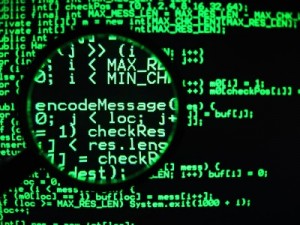 If you’re looking to capture RSA keys, just perk up your ears and “listen.” That’s right! Analysts have claimed that RSA keys can be discovered through sound.

Listening to what’s called a “coil-sound,” the noise is not only loud, but regular enough to be picked up by a properly-equipped cell phone microphone up to 30 feet away. Sure, the process lacks stealth and practicality, but the vulnerability is there for hackers to exploit.

According to the team making the discovery, those who own or trade in cryptocurrency are doubly at risk, as wallet security tends to rely on the same kind of technology. They suggest “making revisions to cryptography software to hide the activity from acoustic analysis.”

Doing so is likely to prevent oneself from becoming too vulnerable to thieves looking to get rich off your bitcoins. Systems like Gnu Privacy Guard (GPG) are currently in the process of making the necessary changes.

Know of any stories that you’d like to see included in our regular industry reports? Post your thoughts and comments below!