Decentralized Bitcoin marketplace, OpenBazaar, is nearing open beta release and will be holding an exhibit at the d10e conference in Amsterdam, February 17-19. They’ll be presenting in the main conference and running a smaller event of their own on the 19th, showcasing their standalone app. This marks an enormous milestone in the project’s maturity.

The Project that spawned OpenBazaar

Originally a darknet hackathon proof-of-concept, OpenBazaar has been in active development since the spring of 2014, and it’s come a long way since then. Upon inception, the marketplace was explicitly for darknet use, aimed at solving the issues with existing darknet markets with trustless transactions, escrow, and decentralization. As OpenBazaar evolved, though, the focus shifted to empowering small merchants using the same features. In its current state, OpenBazaar is a platform similar to Etsy or eBay.
The difference lies in its P2P implementation. Because the network is hosted collectively by the people using the app, there’s no central authority to skim off of the merchants, which is the primary utility of OpenBazaar as a service.

With the public release so close on the horizon, I was curious to see what was in store for early adopters. After teasing the test build into functionality on my desktop, I got on the test network and took a look around:


There’s already quite a few merchants on the testnet, and the interface possesses an unexpected level of polish. There’s a level of user-friendliness here that makes the platform as easy to set up as any online merchant service. Before you go out and build the app from source, though, realize that all of this is for testing ONLY. You can’t sell anything until launch. You can get a jump on setting up your store if you want, though. Let’s take a look at the essential elements to OpenBazaar’s functionality. 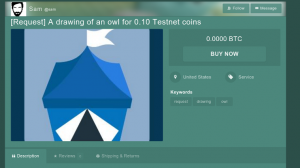 You can buy or sell literally anything on this platform

Peer discovery, account management, and monetary transactions are all handled by the application itself. Every communication in the network is encrypted using automatic key management. The encryption toolchain also manages the trustless escrow system and payment confirmation. In theory, all you need to sell you products globally would be the OpenBazaar app. The decentralized system eliminates hosting costs and brokerage fees common to services like Etsy, eBay, Amazon, and others.
As of now, OpenBazaar only supports Bitcoin as a valid currency. While this may change with extensions and updates to the codebase, the project’s stated focus on security makes it impractical to bake in other transaction APIs.

With recent doubts arising as to whether Bitcoin is viable as a standalone medium of exchange, OpenBazaar’s development and release should do a lot to reassure the faithful. The free, open source project creates a service that incentivises the use of bitcoin by offering real security, a truly open marketplace, ease of use, and a marked lack of transaction and hosting fees. The project’s trustless P2P model and accessibility show the potential bitcoin has in its current state, not to mention the possibilities as the community evolves.  As we see Bitcoin getting closer to the individual and small business through projects like this, arguments against bitcoin by the mainstream media and anti-globalization pundits become harder to believe.

What do you think about OpenBazaar’s recent developments? Let us know in the comments below!

Bitcoin kickstarted the week with an incredible recovery rally, negating a considerable portion of its losses from the previous weekly session against a downside correction in US bond...