Here we go, Bitcoin lovers! It’s capital accumulation time. Saifedean Ammous’ “The Bitcoin Standard” is flying by. However, we must forget about doing a chapter a week. This book is just too chunky, every page is filled with meaty information that refuses to be ignored. There are too many gems for just one of these posts to contain them, and we can’t be giving you several Bitcoinist Book Club posts a week. There’s something to be said about scarcity, as you all should know by now.

In other words, we decided to go slower and maintain the quality.

Today, we’ll cover what a unit of measure actually is, we’ll discuss capital accumulation versus debt, the nineteenth century, the genesis of ideas, and art’s current state. We’re going everywhere fast. All aboard!

Last time, we learned that anyone with the means and opportunity to create more of the “monetary medium” will do it. The temptation to apply a hidden tax that not many are going to detect is just too strong. Sadly, so far, humanity hasn’t been able “to come up with a form of money of which more cannot be created.” Until Bitcoin, that is.

Keynes complained about goldmining being a wasteful activity that consumed a lot of resources while adding nothing to real wealth. While his critique does contain a kernel of truth, in the sense that increasing the supply of the monetary medium does not increase the wealth of the society using it.

So yeah, Keynes was partially right for once. Still, gold was, “the metal likely to attract the least human and capital resources toward its mining and prospecting.” A common misconception is that both gold and Bitcoin are not a good “unit of measure,” because everything’s measured in fiat currency. That just happens out of habit. Both gold and Bitcoin have the necessary characteristics to become “unit of measures.” The following definition clears that up.

It’s important to understand that for a monetary medium to remain perfectly constant in value is not even theoretically possible or determinable. Goods and services which money purchases will change over time as new technologies introduce new goods that replace old ones, and as the conditions of supply and demand of different goods will vary over time. One of the prime functions of the monetary unit is to serve as the unit of measure for economic goods, whose value is constantly changing.

Status update: My wife is nearly finished with The Bitcoin Standard by @saifedean… and she loves it!

Related, she was orange-pilling our mailman last week, who was asking about my financial business (Vailshire) and looking for investment tips.

A characteristic of sound money is that it sightly gains value over time, “meaning that holding onto it is likely to offer an increase in purchasing power.” That’s one of the reasons being exposed to sound money changes your time preference, and leads the holders towards capital accumulation and investing. And vice versa:

The track record of the 46-year experiment with unsound money bears out this conclusion. Savings rates have been declining across the developed countries, dropping to very low levels, while personal, municipal, and national debts have increased to levels which would have seemed unimaginable in the past.

It’s as Ralph Waldo Emerson said, “A man in debt is so far a slave.”

Debt is the opposite of saving. If saving creates the possibility of capital accumulation and civilizational advance, debt is what can reverse it, through the reduction in capital stocks across generations, reduced productivity, and a decline in living standards.

Another fine point by Mr. Ammous is that politicians’ time preference is warped because of their limited time in office. He thinks it’s, “… only natural that such a process would lead to short-term decision making where politicians abuse the currency to fund their reelection campaigns at the expense of future generations.”

This helps explain our current reality. As well as the fact that unsound money makes it less appealing to live a family life since it devaluates away most of its advantages.

The well-known phenomenon of the modern breakdown of the family cannot be understood without recognizing the role of unsound money allowing the state to appropriate many of the essential roles that the family has played for millennia, and reducing the incentive of all members of a family to invest in long-term familial relations.

Innovations: “Zero to One” versus “One to Many”

In the next few paragraphs, Mr. Ammous tries to explain the apparent lack of ideas available in the modern world. Why was everything better in the past? Sound money and what it did to the human psyche might be the answer.

Under a sound money regime, similar to what the world had in the late nineteenth century, individuals are far more likely to engage in long-term investments and to have large amounts of capital available to finance the sort of projects that will require a long time to pay off.

The author’s thesis is that most of the ideas we deal with today have their origins in the nineteenth century, “under the gold standard.” And that, in this century, we’ve just been taking care of those ideas and making them grow. To explain this, he introduces a couple of new concepts:

In his popular book, From Zero to One, Peter Thiel discusses the impact of the visionaries who create a new world by producing the first successful example of a new technology. The move from having “zero to one” successful example of a technology, as he terms it, is the hardest and most significant step in an invention, whereas the move from “one to many” is a matter of scaling, marketing, and optimization.

Can’t wait to continue learning more about #Bitcoin. Thanks @dennis_porter_ for the book recommendation. #AarikaForCongress 🍎🚀 pic.twitter.com/nn0lLQ7vln

In this section, Mr. Ammous argues that most of the failures of art in the last few centuries are directly related to unsound money. Plus, high time preference. Furthermore, the right kind of incentives fuelled the incredible art of times past. That, and patrons. Masters of capital accumulation that turned their eye to immortality.

It is no coincidence that Florentine and Venetian artists were the leaders of the Renaissance, as these were the two cities which led Europe in the adoption of sound money. The Baroque, Neoclassical, Romantic, Realistic, and post-Impressionistic schools were all financed by wealthy patrons holding sound money, with a very low time preference and the patience to wait for years, or even decades, for the completion of masterpieces meant to survive for centuries.

Is this hyperbole or is Mr. Ammous right on the money? Say what you will about modern art, but most of those pieces do seem hastily done.

What is astounding is not just the preponderance of garbage like Rothko’s in the modern art world; it is the conspicuous absence of great masterpieces that can compare with the great works of the past. One cannot help but notice that there aren’t too many Sistine Chapels being constructed today anywhere.

Indeed, one cannot help but notice that. 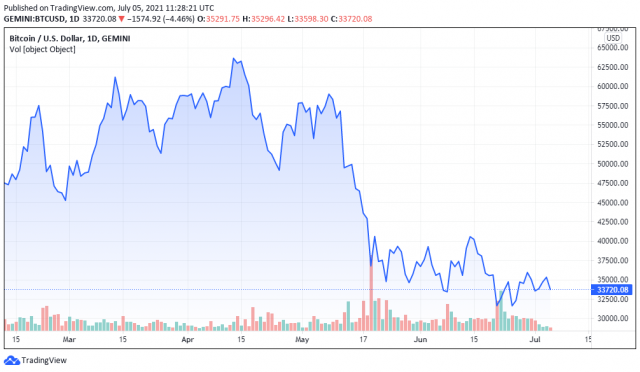